Arts and culture in Bath

Over the centuries Bath has inspired arts and culture, writers and painters, provided the backdrop for countless novels, films and television programmes, and enjoyed being in the spotlight as England’s 18th-century fashion hub. It is world famous for its spa heritage and splendid Georgian architecture, and has developed a lively contemporary cultural scene to boot. It would be impossible to exhaust Bath’s cultural attractions, whatever time of year you visit.

Well-established annual events are a major draw, including Mozartfest, FilmBath, Bath Fringe Festival, Bath Children’s Literature Festival and Bath Beer Festival, as well as new events such as The Bath Festival, a multi-arts festival with music and literature at its heart. The city’s five leading theatres – Theatre Royal, Ustinov Studio, the Egg, the Rondo Theatre, and the Mission Theatre – attract world-renowned companies and directors, and together host a lively and incredibly varied programme of events. And then there’s Bath’s strong culture of music. 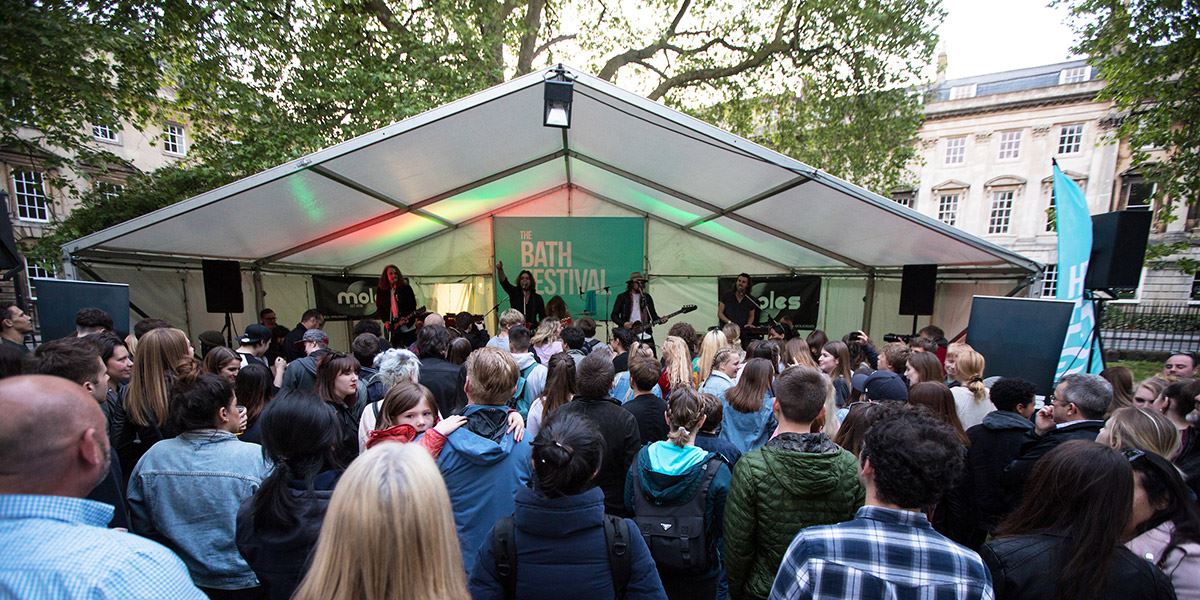 Time your trip to experience the wonderful Bath Festival

Beautiful Bath Abbey provides the largest concert venue in the city, staging many organ recitals and around 20 concerts every year. The Forum, a 1,700-seat Art Deco venue which started off life as a cinema, hosts regular gigs and shows. And the city’s most legendary venue when it comes to seeing current bands is Moles, which has been championing exciting new local and global acts since it opened in 1978. Deliciously dark and atmospheric, over the decades this night time venue has witnessed the sights and sounds of Radiohead, The Smiths, Eurythmics, Oasis, Bastille, Mumford & Sons, and Ed Sheeran amongst countless others. Local bands are often given the support slots for more established national and international artists, offering them a superb platform on which to showcase their talents.

Bath has always attracted and inspired artists, too. The annual Bath Art Fair, which takes place at the start of March, has now moved to Bath Pavilion. The event is designed to make art accessible to all, and it showcases some of the best contemporary professional artists in the country. You can find original paintings in all sorts of media, plus ceramics, jewellery and sculpture from over 80 of the nation’s leading independent artists, all under one roof. The artists themselves are on hand to talk about their creations, and you can pick up prints from £30 and original paintings from £99.

Many famous painters have lived and worked in the city, particularly during its 18th-century heyday. One of these was English portrait and landscape painter Thomas Gainsborough (1727-1788), who moved to Bath to live at number 17 The Circus, where he attracted a fashionable portrait clientèle. Others include English portrait painter Sir Thomas Lawrence (1769-1830) and John Maggs (1819-1896), a painter famous for his coaching scenes. Works by Gainsborough can be found at the public Victoria Art Gallery, where British art lovers flock to see its free, permanent exhibits. 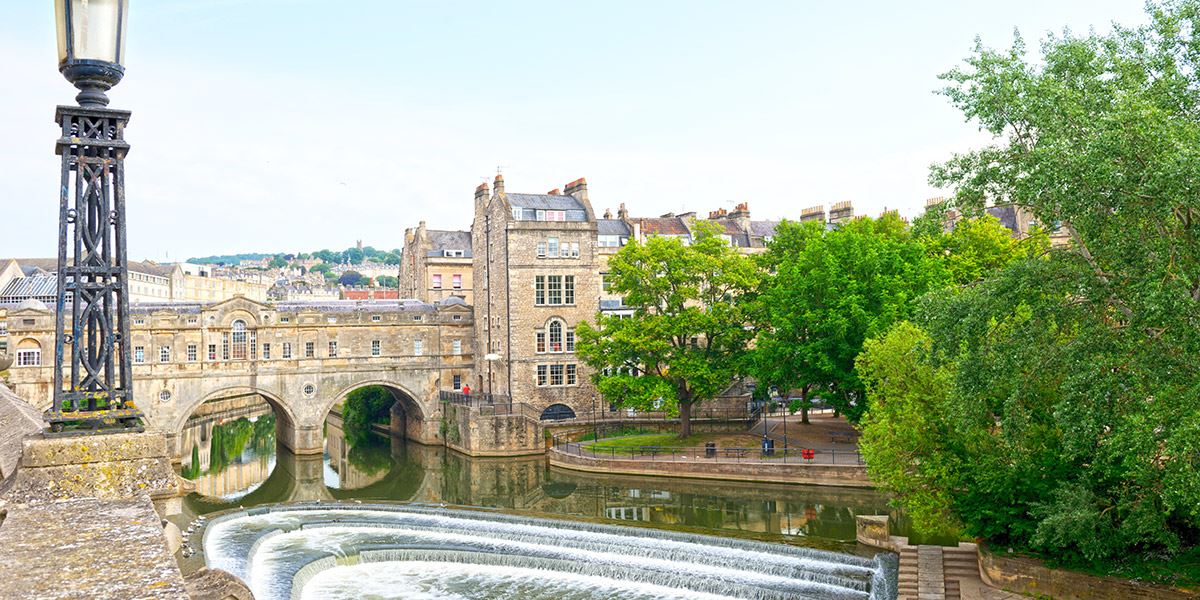 As well as literary greats, this picture-perfect city has also inspired artists

Occupying a grand Grade 2-listed 19th-century building, the gallery’s collection of paintings, sculpture and decorative arts include many British oil paintings dating from the 17th century through to the present day. Alongside Gainsborough you will find the likes of Thomas Jones Barker and Walter Sickert. Further paintings by Gainsborough can be found at the Holburne Museum, which is open daily (10am-5pm except Sundays and Bank Holidays which are 11am-5pm) and also offers free entry at special times (3pm-5pm every Wednesday afternoon, and from 5pm-9pm on the last Friday in the month). This houses fine and decorative arts built around the private collection of Sir William Holburne (1793-1874), which included more than 4,000 objects, pictures and books, all bequeathed to the people of Bath by his sister in 1882.

Once the museum had opened, his collection was further expanded and today it is housed in the former Sydney Hotel, a Grade 1-listed building situated at the end of Great Pulteney Street. Other artists featured in the collection include Guardi, Ramsay, Stubbs and Zoffany, and the museum also hosts changing temporary exhibitions, free performances, creative workshops, talks and family events. There is a bookshop and a cafe that opens out onto Sydney Gardens, which itself was a favourite walk for English novelist Jane Austen, who set part of her novel Northanger Abbey across from the Holburne in Great Pulteney Street.

Many famous painters have lived and worked in the city, particularly during its 18th-century heyday

Since Bath was once known as the most fashionable city in England, no visit is complete without a trip to the well-established Fashion Museum. Housed in the wonderful Assembly Rooms, a grand 18th-century National Trust building that is adorned with sparkling chandeliers, the Museum showcases a world-class collection of historic and contemporary fashions, and hosts exciting temporary exhibitions and one-off events. It is an eye-opener for anyone interested in discovering how we used to dress, and also showcases some world-famous outfits from modern times.

Every year since the museum opened in 1963, it has asked an independent fashion journalist to select a dress or outfit that accurately represents the most important new ideas in contemporary fashion. These are brought together in the “Dress of the Year” section of the collection, and today you can find leading fashion names represented there such as Christian Dior, Donatella Versace, Mary Quant, John Bates, Ossie Clark, Giorgio Armani, John Galliano, Ralph Lauren, Alexander McQueen, Alber Elbaz and Jean Muir. Visitors can also play dress-up in replica Victorian and Georgian outfits, and take photographs against a backdrop image of Bath’s elegant Royal Crescent. 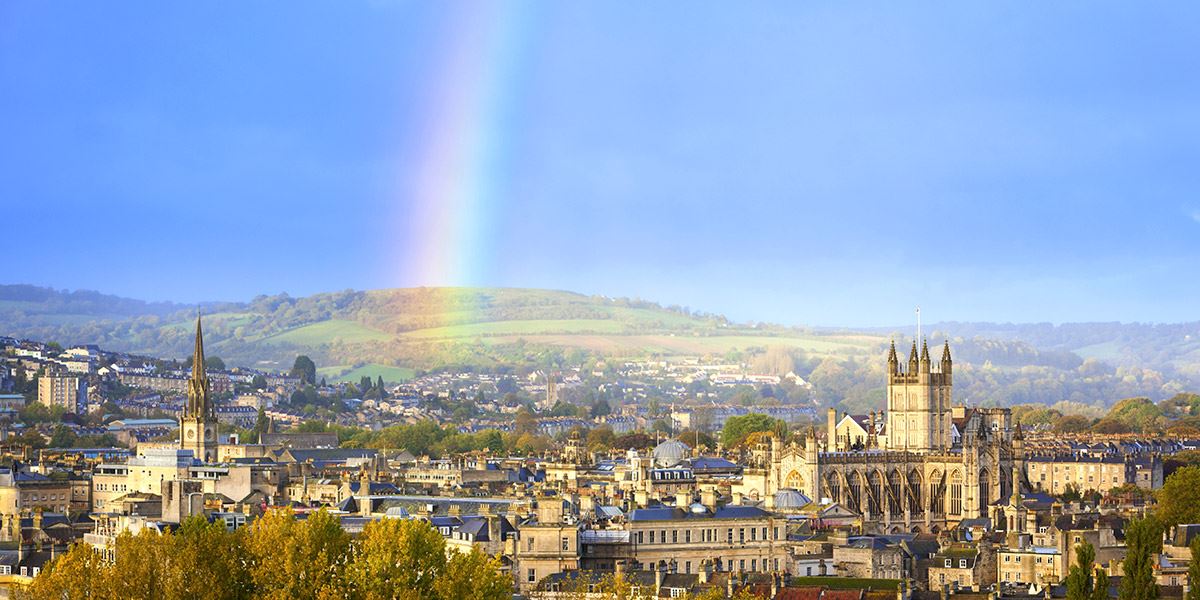 If you’re interested in Bath’s fashion heritage you can also learn a lot at the Jane Austen Centre, which is housed within a period building right in the centre. Fans of the famous writer and her literary classics can learn about her time in the city and the effect living here had on her and her writing. Best known for penning novels which comment upon the social life of the British landed gentry at the end of the 18th century, Austen lived and wrote in Bath for several years. The city provided the inspiration and backdrop to two of her well-known novels – Northanger Abbey and Persuasion – and features in many other writings. Attracting thousands of visitors each year from around the globe, the Centre houses a lifelike Jane Austen Waxwork and uses costumed character guides, and paraphernalia such as historic maps and period costumes, to give visitors a fascinating insight into her life at that time.

You can stop off afterwards for some refreshments at the quaint Regency Tea Room, which is open daily for afternoon and cream teas as well as lunches, cakes and drinks. Fans of Austen will also want to visit The Grand Pump Room in the Abbey Church Yard at the heart of the city: a neo-classical salon which featured in both Northanger Abbey and Persuasion as a popular meeting place for the upper class. The doorway is right next to the main street entrance to the Roman Baths, and inside you can enjoy a traditional afternoon tea, or indulge in one of their other packages such as a Somerset High Tea or Champagne Pump Room Tea. You can also sample the waters from the natural spring which fills the Roman Baths.

Since Bath was once known as the most fashionable city in England, no visit is complete without a trip to the well-established Fashion Museum 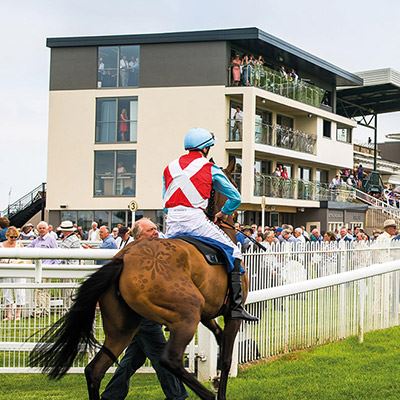 Sporting enthusiasts have no shortage of options when visiting Bath. Football anyone? Read feature > 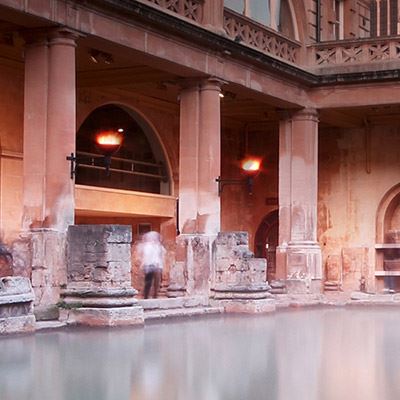 There are so many fantastic things to do in Bath, check out our top 10 activities! Read feature > 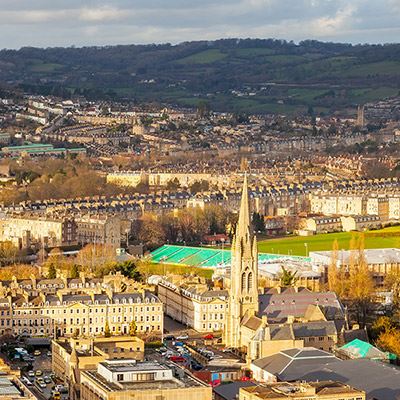 With a historical tapestry that weaves fact with colourful fiction, Bath's stories are fascinating. Read feature >

Before the city had adopted its modern name, the Romans built a bathing complex and temple here. The Roman Baths are probably the city’s most famous attraction and, together with the Grand Pump Room, receive more than a million visitors a year. The original temple was constructed between 60-70 AD, and the bathing complex was gradually expanded over the next three centuries. Later, in the 17th century, claims about the curative properties of water from the springs triggered Bath’s popularity as a spa destination during the Georgian era. 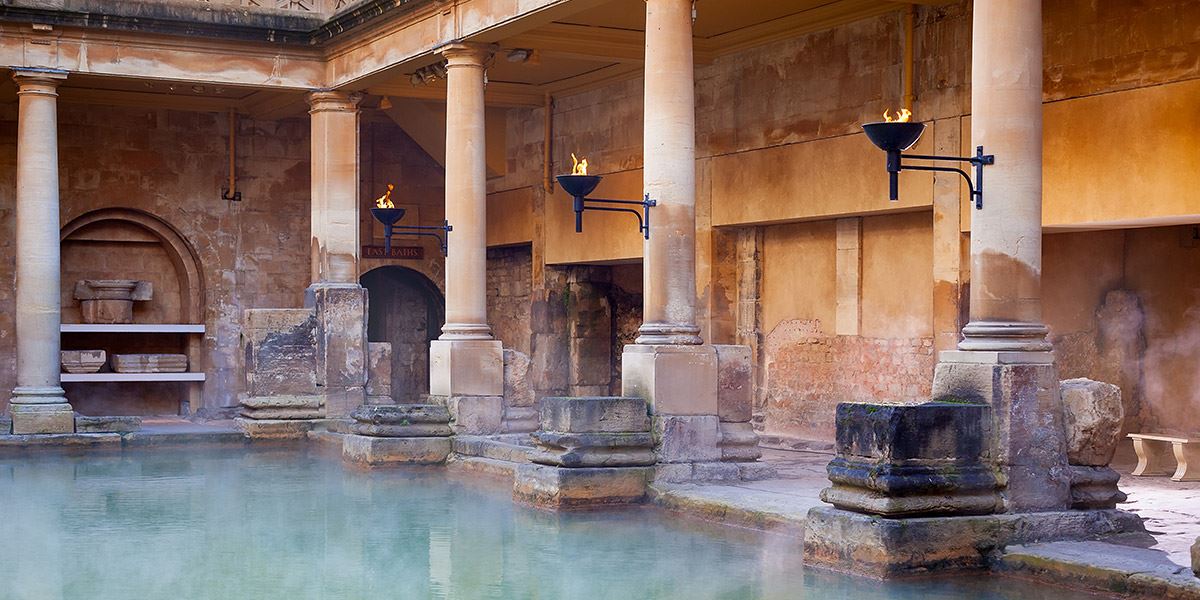 If you’re interested in finding out more about how the city developed architecturally in this Georgian era, head to the Museum of Bath Architecture. Housed within the Countess of Huntingdon’s Chapel on The Paragon, it showcases maps, models, paintings and reconstructions to reveal how a typical Georgian house was built and finished – from the stone mining to furniture-making, wallpaper designs, upholstery and soft furnishings. A 1:500 scale model of Bath gives visitors a unique bird’s-eye view of the city.

If you fancy combining some culture with a bit of time away from the city centre crowds, head to Green Flag Award-winning Royal Victoria Park, which is only a few minutes’ walk away. Opened in 1830 by the 11-year-old Princess Victoria, it was the first park to carry her name and, lying right next to famous Royal Crescent, it gives visitors the chance to appreciate the sweeping architecture from its well-kept lawns. This curved strip of elegant town houses is widely regarded as one of the greatest examples of Georgian architecture to be found anywhere in the UK, with its Georgian stone façade remaining much as it was when it was first built between 1767 and 1774.

If you’re also interested in religious architecture, take a look around Bath Abbey, where you can enjoy a few moments of peace and tranquillity away from the madding crowd. This striking structure in the pedestrianised hub of the city dates back to the 7th century, and blends several architectural styles – but it is particularly highly-regarded as one of the largest examples of Perpendicular Gothic architecture in the West Country. As you explore the Grade 1-listed building look out for the medieval angels that decorate its exterior; the impressive ceiling with its fan vaulting; and the 617 wall memorials and 847 floor stones.

The Abbey also hosts regular world-class choir performances, organ recitals and lunchtime concerts throughout each year, some of which are free to attend. Once you’ve finished exploring its cavernous halls, outside in Abbey Square there are plenty of cafes where you can relax with a coffee and enjoy some people-watching while listening to the local buskers. 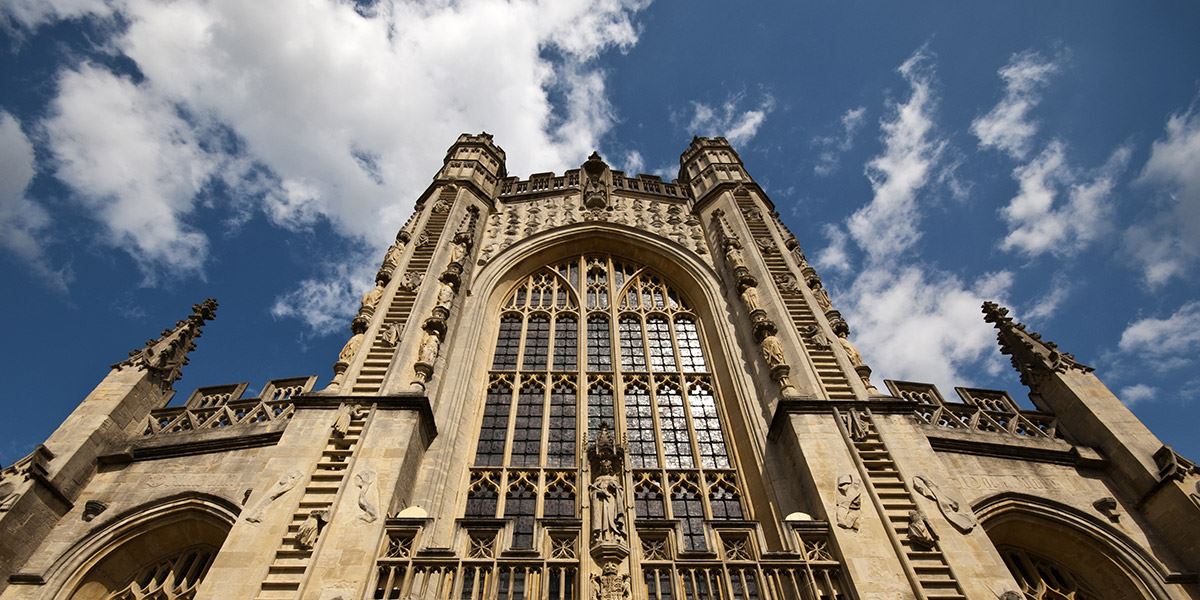 One very distinct museum in Bath is the Museum of East Asian Art, housed in a restored Georgian town house just steps away from The Circus. It is the only museum in the UK dedicated solely to artefacts originating from east and south east Asia, and is home to a treasure trove of 2,000 objects – including an extensive jade collection, ceramics, bamboo carvings and bronzes dating from around 5000 BC to the present day.

Offering visitors a vivid insight into the art and cultures of China, Japan, Korea and south east Asia, the museum was originally started by Brian McElney, who spent his working life practising law in Hong Kong. He developed a passion for Chinese and other east Asian art and, over the years, his collection grew. After his retirement he returned to England, found the funds to restore the Georgian townhouse in Bath, and opened the successful museum in the 1990s.

This is just a small taste of the art and culture Bath has to offer. Wandering around the city you will stumble across many more commercial art galleries, fascinating antique shops, and smaller special interest museums such as Bath Postal Museum and the Herschel Museum of Astronomy. In fact, just looking around you at the city’s core buildings makes you feel like you’re exploring a living museum – one that is immaculately-preserved and well-loved by residents and visitors alike.

Everything you need to know about Bath

Where to eat in Bath

The best things to do in Bath

The best shopping in Bath

The best nightlife in Bath