The best things to do in Belfast

The first of your days out in Belfast has to involve the Titanic, the White Star Line’s most luxurious liner, conceived and built in this very city just over a century ago. After touring the popular Titanic Belfast museum (frequently voted one of the world’s leading tourist attractions) and learning the outlines of this incredible true story, you should also take time to have a look at the Titanic Dock and Pump House.

There is now a cafe and visitor centre nearby. Other vessels you should step aboard include the Titanic’s ferry that transported passengers from Cherbourg onto their last voyage, the HMS Nomadic and HMS Caroline, veteran of the Battle of Jutland and a Royal Navy museum. The vast dry dock, which held the 882ft 9in ship, allows you to come into contact with the place where history was made by the employees constructing the Titanic at Harland & Wolff. You can almost hear the shipbuilders’ cries as you marvel at the evidence of engineering genius.

When the Titanic was launched on May 31, 1911, they needed 22 tons of fat and soap to slide her into the sea. Finally, a boat trip with the Lagan Boat Company round the shipyard is a must, taking in the industrial history and a breeding seal colony in Musgrave Channel. The company trademark is the local, wry comment on the disaster – “She was all right when she left here!”

Your first day out in Belfast has to involve the Titanic, the White Star Line’s most luxurious liner, conceived and built in this very city just over a century ago

Then you need to move from a real 20th century tragedy to George RR Martin’s imagined Game of Thrones. County Down provides many of the series’ best locations, so select one of several coach trips on offer and set off for Winterfell. You’ll travel to Ballycastle where Varys was born a slave, then see Downhill Strand which features in the series as Dragonstone. It’s easy to see why HBO filmed here.

The Gray Cliffs of Ballintoy Harbour, aka the Iron Islands, the natural and sinister tree arches of the Dark Hedges, Arya’s escape route from King’s Landing and the caves where Melisandre of Asshai gave birth to her “shadow baby”, are as dramatic as their on-screen counterparts.

Many tours combine a visit to the Game of Thrones locations with a trip to the famed Giant’s Causeway, Ulster’s greatest prehistoric marvel. As you go down the series of basalt rock steps, you’re experiencing geological evolution that dates back 60 million years.

But legend says it was built by the legendary Ulster giant Finn MacCool. Whichever, the only Irish UNESCO World Heritage site is magnificent – and there’s a cafe and visitor centre.

County Down provides many of the series’ best locations, so select one of several coach trips on offer and set off for Winterfell

If the stones have inspired you, how about a family visit to W5, the award-winning science and education centre in Belfast’s SSE complex? It makes the subject fun via innovative exhibitions which over the past few years have included shows about Dino Jaws and Myths and Monsters, an Oscar-winning animation featuring Wallace and Gromit.

This is the place to stretch young minds, and you can also stretch young bodies with Climbit, a massive climbing structure inside the atrium. What about some stargazing?  Just an hour away from Belfast, The Armagh Planetarium has been thrilling budding astronomers since it opened in May 1968, just in time to enjoy the Moon landings and the late Neil Armstrong’s rousing announcement. It was a small step for founder Dr Eric Lindsay, but it’s a giant leap for the 50,000 visitors the planetarium receives every year.

There are 3D digital effects and you, and the family (but no children under six), can travel to the International Space Station and to Mars and beyond. You can also see Ireland’s largest meteorite on display, a mere 4.6 million years old.

The Armagh Planetarium has been thrilling budding astronomers since it opened in May 1968, just in time to enjoy the Moon landings and the late Neil Armstrong’s rousing announcement

If you fancy a political jaunt, take a bus out to Stormont, the seat of the Northern Ireland Assembly, built in 1921 on a glorious hillside. In summer, it’s possible to picnic on the slopes and admire the architecture, based on Washington’s parliament buildings. Open to visitors in July and August each year, with tours between 10am-3pm Monday to Friday, there are also nature trails and orienteering walks.

One of the buildings that clearly (and scarily) illustrates Belfast’s political past is Crumlin Road Gaol. Dating from 1845, the Crum, as it’s known, is linked to the handsome but derelict Crumlin Road Courthouse opposite by an underground tunnel along which prisoners would walk to learn their fate. It originally housed around 550 prisoners and in the unenlightened early days children might be imprisoned for stealing food.

One young man, Patrick Magee, hanged himself in 1958 after being sentenced to a stint here. Executions of prisoners condemned to death were originally carried out in public as Crumlin had no gallows until an execution chamber was built in 1901. Today you can take a guided tour of Crumlin Road Gaol, which is open seven-days-a-week, go on a ghost tour or enjoy a live music event here. Travel to nearby Newtownards to visit Echlinville Distillery, which in 2013 became Northern Ireland’s first licensed distillery in over 125 years.

Echlinville is a listed house by Charles Lanyon, Belfast’s leading Victorian architect. Lynn and Shane Braniff began the distillery by reviving the historic Dunville’s Whiskey name. Since then they have crafted their own whiskey and gin, making Echlinville Gin, Ireland’s only single-estate gin. 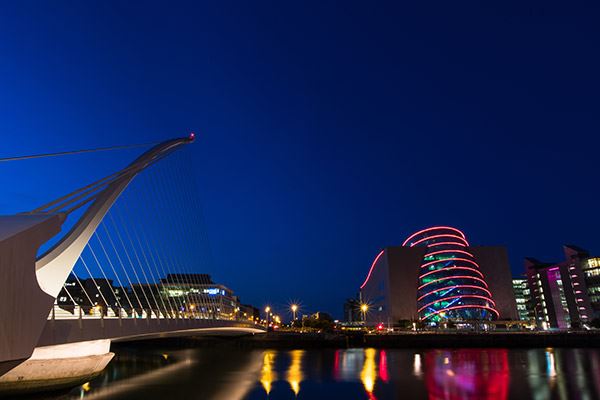 Dublin is only 2 hours by train

A trip down south to Dublin, capital of Ireland or Eire, is only two hours by train and about two and a half by coach. If you go, you will be rewarded with all the amenities of the island’s other great city, from shopping in Grafton Street to a spot of lunch at Davy Byrne’s restaurant and maybe a trip round Trinity College with its medieval Book of Kells, the beautifully-illustrated bible. Or there’s the famous literary pub crawl, starting at Duke pub, Duke Street, on evenings from April to October.

In an ancient landscape, you’d expect old buildings and you won’t be disappointed in Ulster. Dunluce Castle, for example, is based on a rocky outcrop of basalt between Portrush and Ballintrae, and has been in situ since the 13th century. Other castles worth visiting include Glenarm Castle, which hosts a lot of music events, and Carrickfergus Castle.

If you like stately homes, the National Trust runs some great properties including Mount Stewart, with its fabulous gardens, Castle Ward with its working corn mill and the Argory in Portadown with its adventure playground, an interior stuffed with antiques and an 1824 barrel organ.

Ten pin bowling is one for the family and at the Sportsbowl in Glengormley, you get an hour of high end fun for £22 a lane. There are 16 lanes to play in, a children’s tumble soft play area and go-karting.

For the adults, the Bushmills Whiskey Tour is one invitation you don’t want to turn down. This distillery in County Antrim is one of the oldest whiskey plants still in operation and it welcomes visitors.

Do check ahead to avoid disappointment, as tours can be postponed for operational reasons. You also need ID to prove you’re old enough to enjoy the unique, mellow taste of Old Bushmills. Past the other Holywood, a genteel seaside town, you should see the Ulster Folk and Transport Museum in Cultra. It has interactive activities in the early 20th-century village, guides in 1900s costume to show you around, exhibits on food and farming, demonstrations of lace making and ironwork, all of which make you feel part of the Victorian daily round.

A trip down south to Dublin, capital of Ireland or Eire, is only two hours by train and about two and a half by coach

Another great museum is the outdoor Ulster American Folk Park just outside Omagh, which gives you an insight into the emigrants’ experience as they left home for good. If you want an adventure, devote a day to a trip to Rathlin Island, which sits off the west coast. A six-mile ferry ride from Ballycastle will get you to this small, beautiful island which has an RSPB Seabird Centre with puffins (see them from April to July) and guillemots, a colony of seals at Mill Bay and this is reputedly where Robert the Bruce saw the spider’s web.

There’s also the Manor House restaurant (with 11 rooms), a cafe and a bar, and on a clear day you can see the Mull of Kintyre. Another enjoyable destination is Newcastle, with its kiss-me-quick seaside shops and one of the most attractive beaches in Northern Ireland thanks to the Mountains of Mourne which, as the famous song has it, “sweep down to the sea”. After admiring the view, you could try a round of golf and have a meal in one of the cafes or pubs, or at the Slieve Donard Hotel.

Another popular seaside destination is Portrush, worth visiting for its beach and Barry’s amusement arcade – it’s retro with a great small roller coaster. Finally, thrill seekers should also pencil in the Carrick-a-rede rope bridge in Ballintoy, near Ballycastle. Originally a single rail bridge put up by fishermen who wanted to check salmon nets on the rocky island, it’s now a two-hand rail bridge but still exciting.

If you take up the rope bridge challenge – and they operate a one way system here in busy periods – you’ll discover spectacular views down the 30-metre deep chasm and out to Rathlin Island. The bird watching is fantastic and there is a children’s discovery trail for eight to 14 year-olds.

Everything you need to know about Belfast

Where to eat in Belfast

Your guide to arts and culture in Belfast

The best shopping in Belfast

The best nightlife in Belfast