Previously hidden secrets and insights into the Anglo-Saxon past of Bamburgh, Northumberland, will be revealed for the first time with the unveiling of a new cutting-edge interpretation recreating Northumbria’s Golden Age.

The interpretive display and unique interactive digital ossuary at St Aidan’s Church and Crypt in the village, tells the story of 110 skeletons dating back to the 7th and 8th centuries unearthed from what is believed to be the burial ground for the royal court of Northumbria.

The medieval cemetery known as the Bowl Hole was discovered beneath sand dunes just to the south of Bamburgh Castle – once the capital for the powerful kings of Northumbria.

Now, with the help of advanced technology, the secrets these ancients took to their graves 1400 years ago have been unlocked and brought to life for a 21st-century audience thanks to a £355,600 grant from the National Lottery Heritage Fund, which has also seen the reopening of St Aidan’s beautiful 12th-century crypt to the public once again. 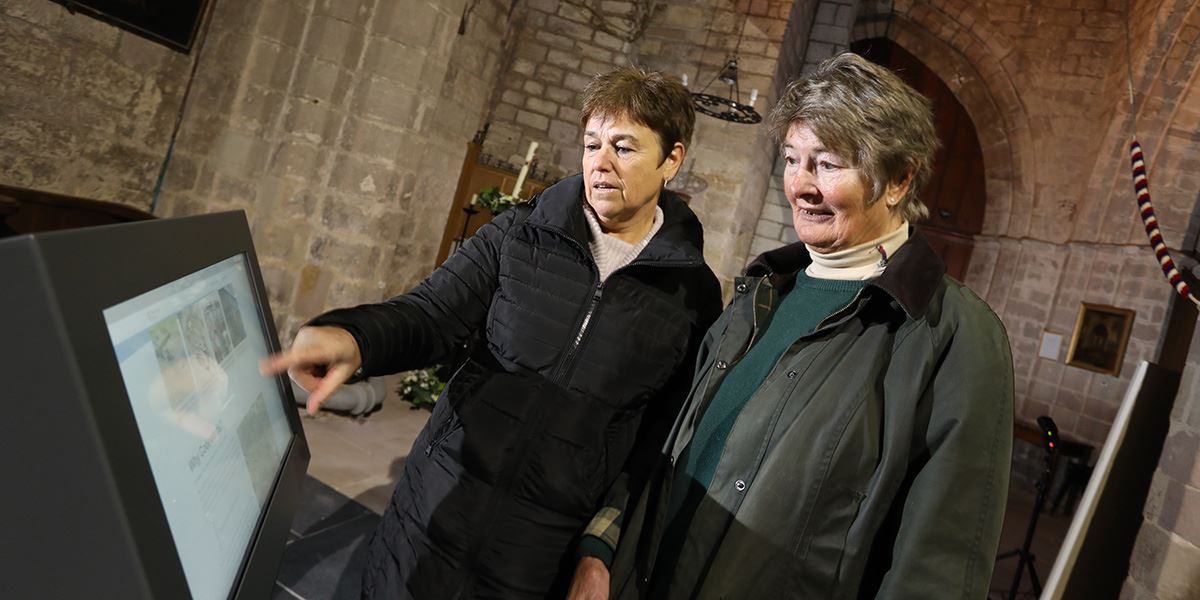 Among the startling revelations is that far from being a sleepy backwater, Bamburgh on the north Northumberland coast was a thriving and cosmopolitan hub drawing people from across Europe to live and work – including St Aidan, who travelled from Iona to establish Christianity in the area and founded a place of worship in 635AD on the site of the present church that bears his name.

Isotope analysis has revealed that less than 10 per cent of the 110 skeletons came from the immediate Bamburgh area, with most originating in the wider British Isles, particularly Western Scotland, and even as far away as Scandinavia and the Mediterranean.

“It is proof”, says the Vicar of St Aidan’s, the Revd Louise Taylor-Kenyon, “that people have always travelled, and that even in the 7th century the idea of country boundaries was fragile. It is a reminder that this nation’s history has continually been one of people visiting, settling, intermingling, and creating relationships and a more diverse society as a consequence”.

On display to the public

The interpretive display and digital ossuary allowing the public to probe the wealth of osteological data from the Bowl Hole excavations is managed by Bamburgh Bones, a collaboration between the Northumberland Coast AONB Partnership, St Aidan’s Parochial Church Council, Durham University, and Bamburgh Heritage Trust. It unites in a user-friendly way the many unique stories of these early residents.

They include an man aged between 17-20 who died after a sword blow cut through his left side from his collarbone to his knee; an Irish woman of around 25 whose skeletal remains show she was almost certainly a weaver or needleworker; and a nine year old, whose teeth reveal they were possibly born as far away as North Africa and spent their early childhood in France.

The skeletons excavated, analysed and researched over a 20-year period, were again laid to rest in 2016 in individual ossuary boxes in a smaller second crypt within the main one at St Aidan’s. 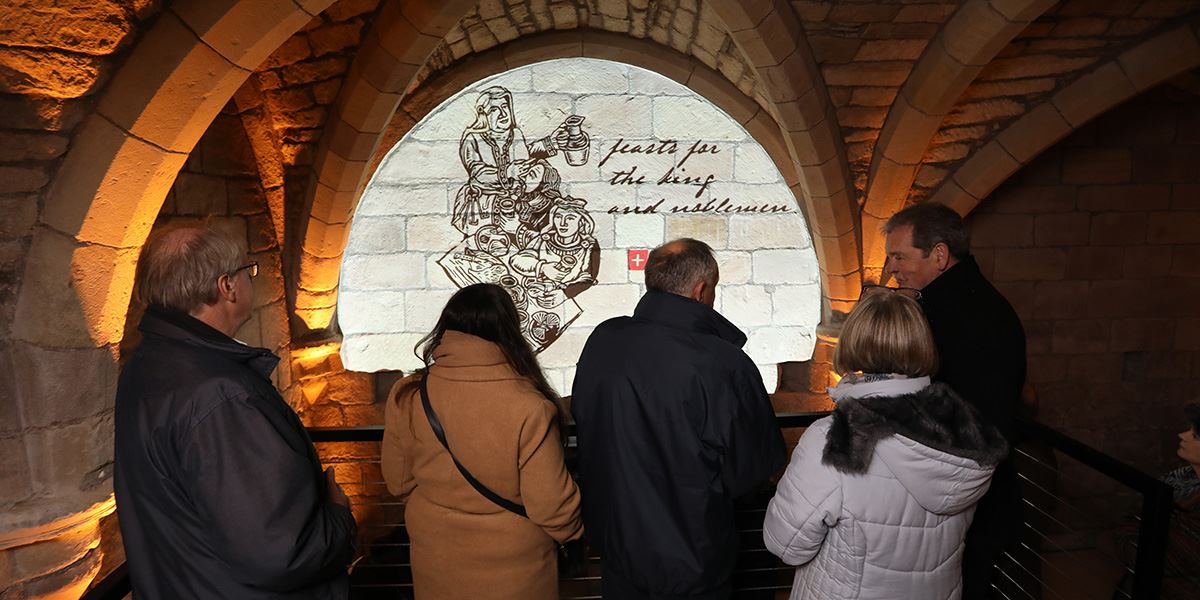 Access issues have meant that up to now the crypt has only been open to the public by special arrangement. However, new stairs have been built to enable access to the main crypt, from where the second one with its neatly stacked boxes containing the bones, can be viewed.

Entering the crypt, visitors will now be met with a short video using linocut animations that tell the story of the Bowl Hole excavations, with further information panels and the digital ossuary available in the church.

It is hoped the Bamburgh Ossuary will help spread the word about an under-represented period of the area’s history – namely the regional, national and even global role it played in the spread of Christianity and Anglo Saxon culture.

The skeletons excavated, analysed and researched over a 20-year period, were again laid to rest in 2016 in individual ossuary boxes in a smaller second crypt within the main one at St Aidan’s

Jessica Turner, Project Officer for Accessing Aidan, said: “So far, little has been made of this period in Bamburgh’s history, when people travelled from far and wide to enjoy its rich cultural and religious heritage, and marvel at its beauty and treasures in what is now referred to as the Golden Age of Northumbria.

“It really was a bright and shining age with the melting pot of cultures represented reflected in the likes of the Lindisfarne Gospels with its stunning mix of Celtic, Anglo Saxon, Mediterranean and Arabic imagery and calligraphy.

“The 7th and 8th centuries are often referred to as the Dark Ages, but in Northumbria it was an age of enlightenment. We need to remember that if St Aidan hadn’t come to Bamburgh then we wouldn’t have had the Lindisfarne Gospels and many of the things we now take for granted like Durham Cathedral and the wider North East’s Christian and cultural heritage. 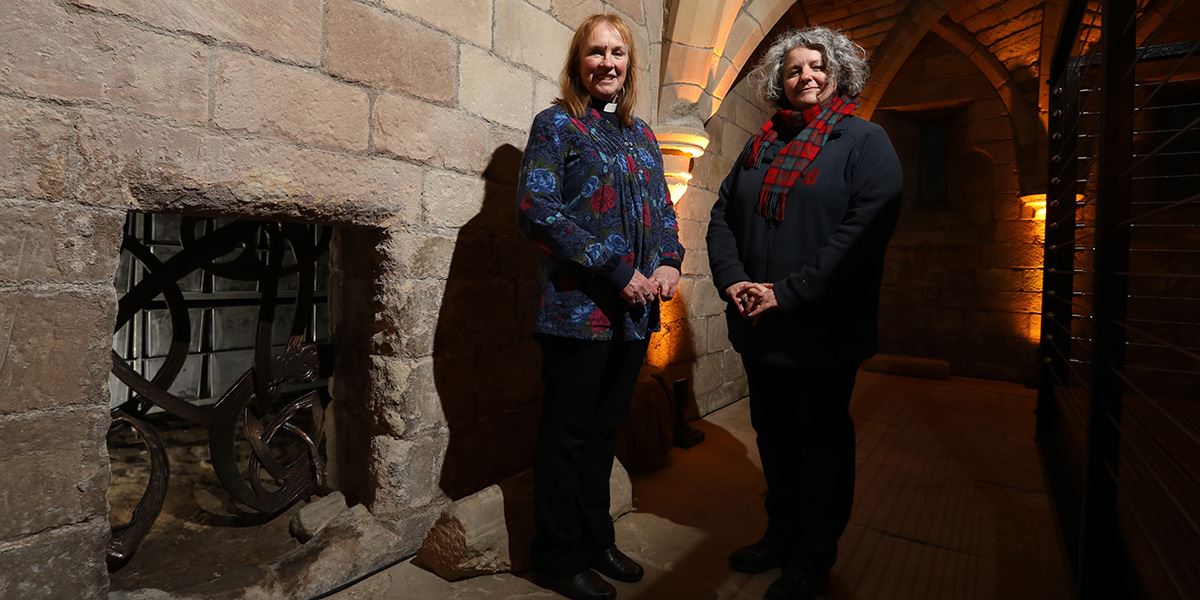 “It’s a story that is long overdue in being told, but the new Bamburgh Bones interpretation and digital ossuary go a long way to rectifying that”.

David Renwick, Director, England, North at The National Lottery Heritage Fund, adds: “We are delighted that money raised by National Lottery players is enabling the fascinating archaeological finds in the Bamburgh area to be shared and explored more widely. As we celebrate our 25th birthday, the opening of this new display in St. Aidan’s Church and Crypt is a wonderful present to receive”.

It really was a bright and shining age with the melting pot of cultures represented reflected in the likes of the Lindisfarne Gospels with its stunning mix of Celtic, Anglo Saxon, Mediterranean and Arabic imagery and calligraphy

In 2016, a new heritage opportunity was identified when a home was being sought for the human remains which had been discovered in an early medieval burial ground beneath the dunes just south of Bamburgh Castle in 1997.

The ‘Bowl Hole’ was excavated and researched by Durham University Department of Archaeology and Bamburgh Research Project (BRP), the skeletons removed and, over a period of almost 20 years, closely analysed and researched. 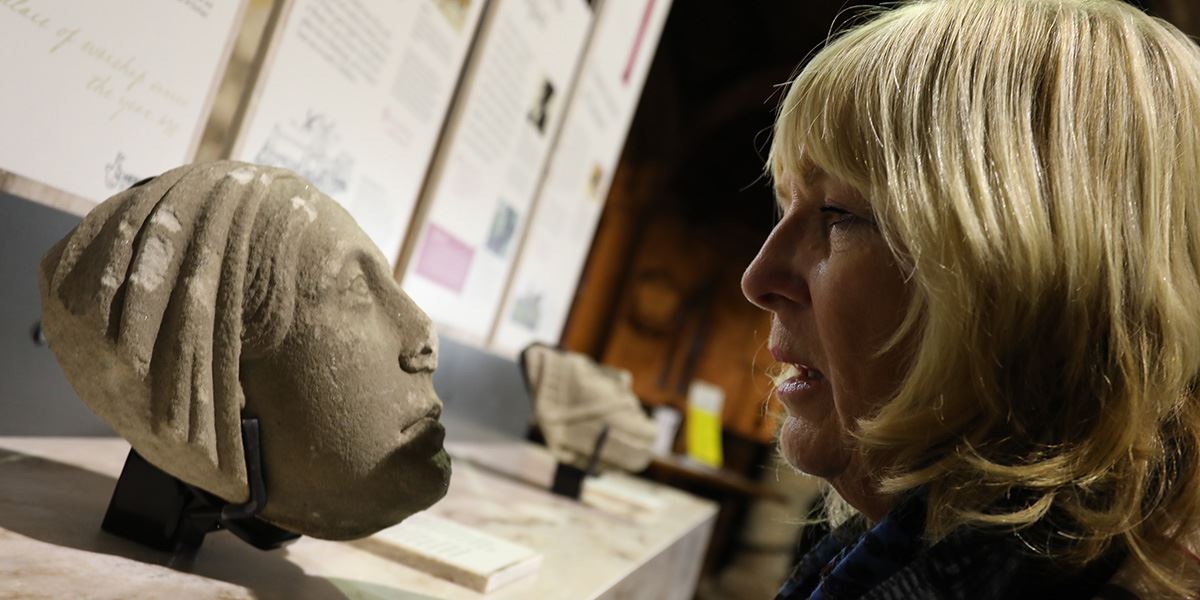 Take a close look at the past

As the research period drew to a close, a need was identified to inter the skeletons in an appropriate setting. Bamburgh Heritage Trust (BHT), working closely with partners Northumberland Coast AONB, successfully bid for money from the Coastal Revival Fund to create a new ossuary in the crypt beneath St Aidan’s Church.

As a result, the Bamburgh Bones project, led by BHT, was created, and work began on interpreting the area’s unique Anglo Saxon history, and celebrating the stories of the skeletons, the church and the village, and bringing it to a wider lay audience.

In 2016, the 110 skeletons were committed to their final resting place. Whilst the skeletons themselves have been preserved in perpetuity, their unique and fascinating stories remained untold.

Archaeological research had dated the human remains to the 7th and 8th centuries. This period is known as the Golden Age of Northumbria, when culture was flourishing and Bamburgh was the royal stronghold of St Oswald, King of Northumbria from AD634 to AD642. He was renowned for reuniting the two kingdoms of Bernicia and Deira, and establishing Christianity in the region.

Oswald invited missionaries to come to Northumbria from Iona. The gentle and saintly Aidan established a centre of learning and culture at Lindisfarne and dedicated his life to sharing his faith with local people.

Research has revealed that the 110 excavated skeletons were healthy and privileged people, who were likely to have had some association with the royal palace. A significant number of them had arrived in Bamburgh from other parts of the world, including Norway and the Mediterranean. 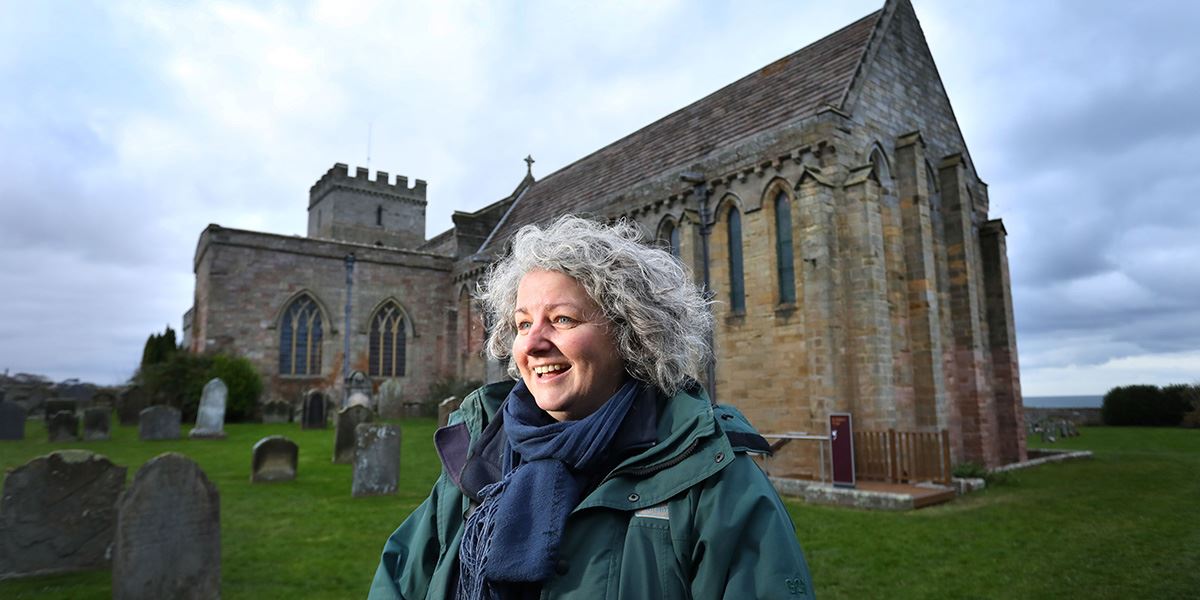 They also had terrible teeth, with cavities and plaque. Abscesses were common, even in relatively young people in their 20s. It is thought this is a consequence of rich food and perhaps also the consumption of mead. They were often tall and robust individuals, certainly more so than the average for early medieval populations. The conclusion is they were high status individuals associated with the royal court. Research on the skeletons has revealed a number of interesting stories

• An older Bamburgh woman aged 65+
• An older man aged 60+, originally from Scandinavia
• A young Irish woman aged about 25, whose skeletal remains show she was almost certainly a weaver or needle-worker, including a wear to the right central incisor from the repeated clasping of an instrument like a needle between her teeth
• A child of about nine with both baby and adult teeth present in the skull. The isotopes show the baby teeth (neonatal stage) formed in the southern Mediterranean or possibly north Africa and then adult teeth formed (early childhood) in France
• A young man of about 17-20 years with evidence of a sword strike down his left hand side which cut through his left clavicle, scapula, ribs, pelvis and knee
• A man aged about 25 from the Mediterranean who suffered from gout
• A Hebridean man of about 45 who was almost certainly a contemporary of St Oswald

Research has revealed that the 110 excavated skeletons were healthy and privileged people, who were likely to have had some association with the royal palace

The Bowl Hole is an early medieval cemetery 300m to the south of Bamburgh Castle. It is thought to be the burial ground for the royal court of the Northumbrian palace that lies beneath the present castle.

The cemetery was first discovered in the winter of 1816/17, following a violent storm that blew away a large volume of dune sand to reveal an ancient land surface and a number of graves marked out by stones set on edge.

Although it was subject to limited investigation in the 1890s and 1930s, few records survived and the precise location of the site was not recorded. The present phase of research was intended to re-locate the site and undertake a limited excavation to provide information on the time period during which it was in use and its current state of preservation. 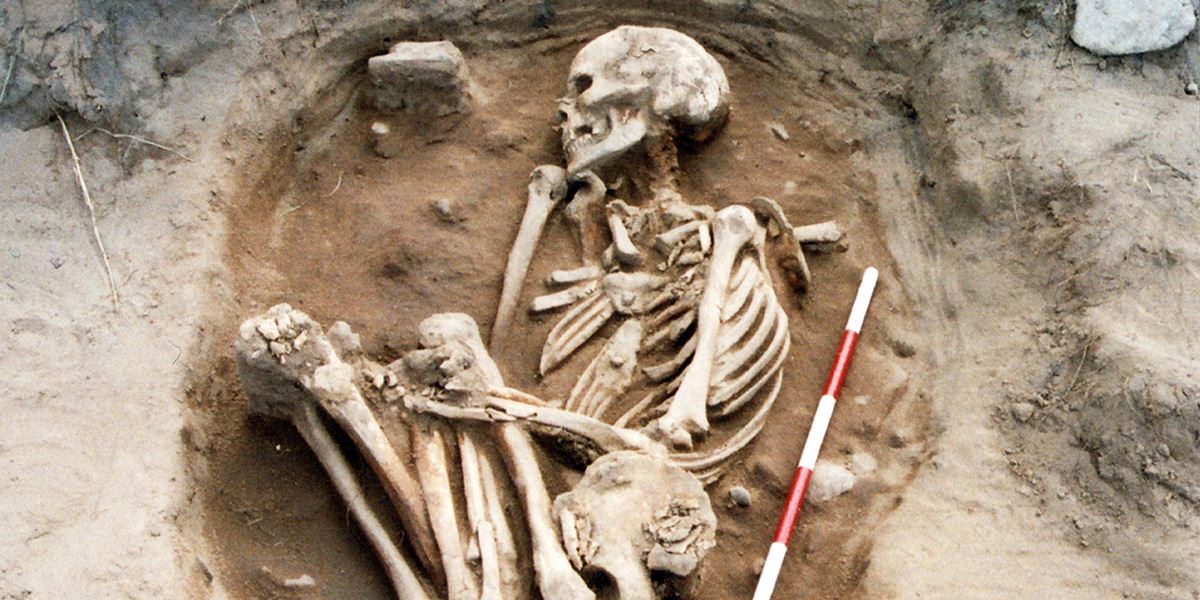 During the course of the dig individual skeletons were excavated and scientifically analysed. A combination of radiocarbon dates and the form of the burials, with very few grave goods, has led to the current interpretation that the cemetery was principally in use in the 7th and 8th centuries AD and that its inhabitants are likely to represent some of the earliest Christians in the ancient Kingdom of Northumbria.

Evidence suggests the cemetery site is much larger than the area excavated and that there could be up to 900 more skeletons buried beneath the dunes.