The search is on to find a mystery man who has finally solved a 40-year-old puzzle at a leading North East hotel.

Lumley Castle Hotel, at Chester-le-Street near Durham, has been trying to find the ancient key to its historic banqueting hall since the 1970s. But the whereabouts of the missing key were finally solved this week, when it turned up in the post with a letter from a man called John, confessing to taking it.

“Back in the 1970s, to my shame, I arrived home with the enclosed key after an intoxicating evening at Lumley Castle” said the letter. “The key, to the best of my memory, fits the outside door in the banqueting hall”.

“It has been on my bookcase for around 40 years, I have moved house four times since that time and now reside back in the south of England. Over the years my conscience reminded of those good days in the North East but it is time to correct matter, so with sincere apologies I duly return the key to you.” 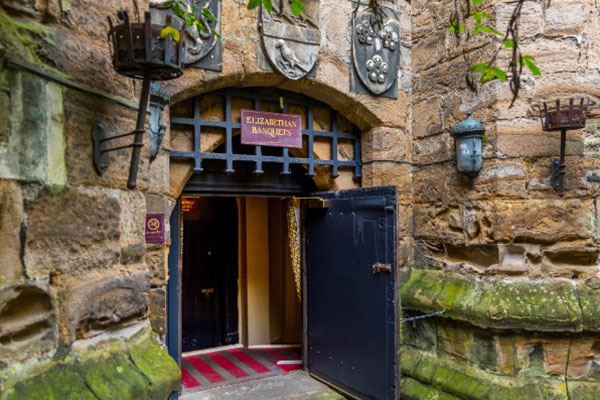 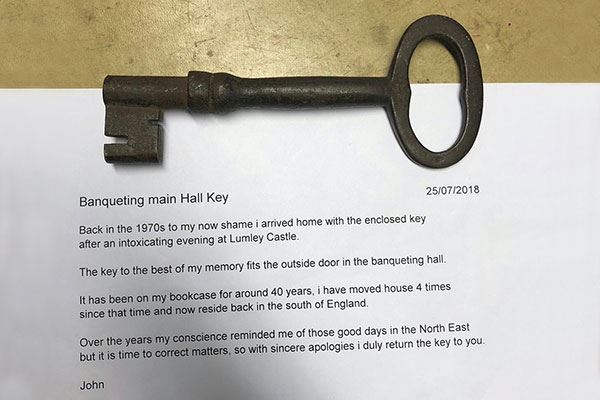 The missing key and letter it returned with

The letter has no surname and no address, so hotel staff have no idea who “John” is – but are very happy to have the key back.

“The key has been missing a very long time and nobody had any idea where it was” said Lauren Colledge, sales manager at Lumley Castle. “We have no idea who John is but are very glad that he’s finally had an attack of conscience and returned it to its rightful home. We hope that someone will know who he is so we can tell him that we forgive him and are very grateful that it’s back at Lumley”.

Lumley Castle is a 630-year-old castle and is now a four-star hotel which has retained many of its original features, including a dungeon, crenelated towers and more than 50 bedrooms decorated in period style.

The hotel is also famed for its medieval banquets and is a popular choice for weddings, conferences and events.

Birthplace of the railways

Relax and retreat in luxury at Redworth Hall Hotel