The UK has some of the most stunning castles in the world. Sometimes they come with lofty turrets and battlements, and in some cases they are just an abandoned tower, but castles are brimming with fascinating history. As a result it is very hard to make a list of the best castles to visit, but we’ve had a go.

One of the largest and most iconic inhabited castles in England, Alnwick Castle has witnessed battles, rebellions, tragedy and romance, and has been home to a variety of interesting people – from Harry Hotspur to Harry Potter.

Enjoy a tour of the collections of art and furniture in the treasure-filled state rooms, or join a Battleaxe to Broomsticks tour to find out about the Northumberland castle’s starring film roles. 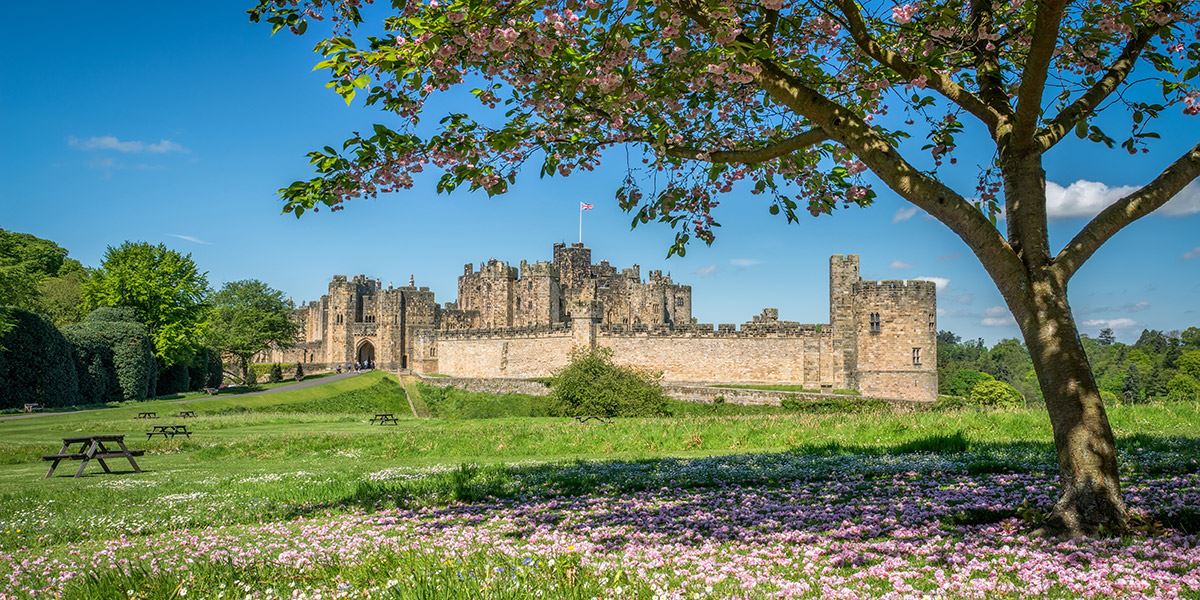 Harry Potter fans will love a trip to Alnwick Castle

Join the resident Hogwartian professors and prefects for a broomstick-flying lesson on the very spot of Harry’s first lesson. Learn medieval crafts and skills in Knight’s Quest, before putting your skills to the test when facing the beast that lies within Dragon Quest.

Open: Daily between late-March and October

Fifty years in the making, this UNESCO World Heritage Site was intended to stamp English might irrevocably on Welsh soil. Having recently returned from the crusades, King Edward I tried to echo the walls of Constantinople to illustrate his imperial ambitions and built an ‘Iron Ring’ of castles, of which Caernarfon was a crowning jewel.

It survived three sieges during the civil war pretty much unscathed and the King’s Gate is rated the mightiest in the land while the Eagle Tower is one of the finest decorated medieval fortifications. The closest thing Wales has to a royal palace, it was used for the investiture of Prince Charles in 1969.

Spanning more than 700 years, the history of Hever Castle is rich and varied. The original medieval defensive castle, with its gatehouse and walled bailey, was built in 1270. In the 15th and 16th centuries it was the home of one of the most powerful families in the country, the Boleyns, who added the Tudor dwelling within the walls.

The Kent castle was to become the childhood home of Anne Boleyn, King Henry VIII’s second wife, who became Queen of England for just 1,000 days. It was Henry’s love for Anne and her insistence that she became his wife rather than his mistress that led to the King renouncing Catholicism and creating the Church of England. 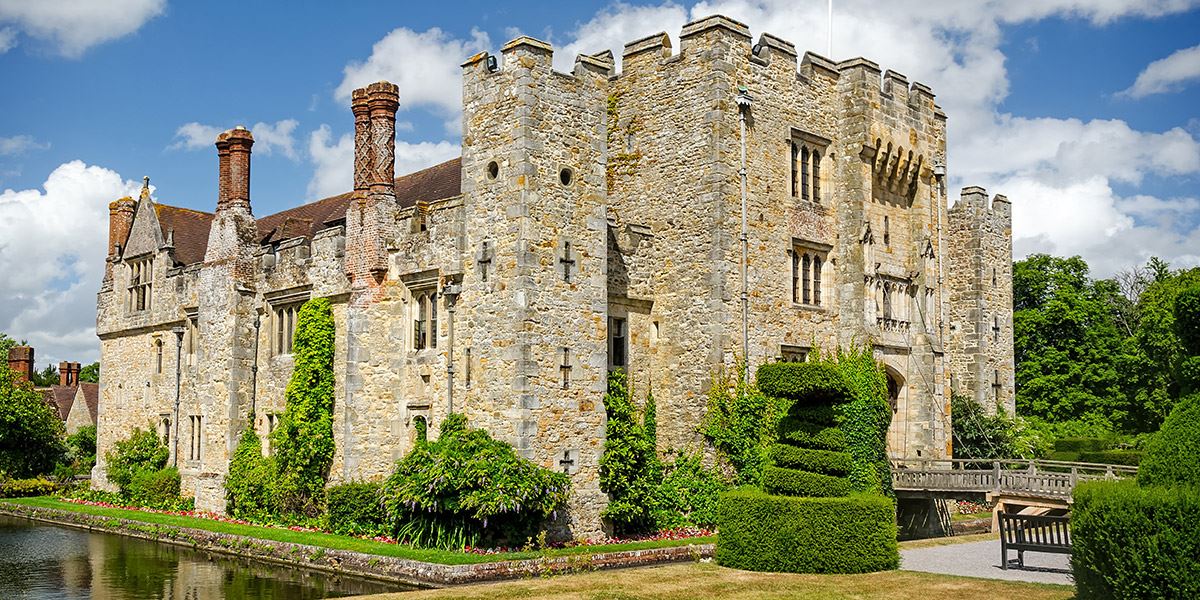 Hever later passed into the ownership of another of Henry VIII’s wives, Anne of Cleves, and from 1557 onwards it was owned by a number of families including the Waldegraves, the Humphreys and the Meade Waldos.

Gradually it fell into decline before William Waldorf Astor invested time, money and imagination in restoring the castle. At Hever, his wealth and vision enabled him to create a lavish family home that also indulged his passion for history.

Stirling Castle is one of Scotland’s most historically important sites and was once a favoured residence of the Stewart kings and queens who held grand celebrations at the castle.

Knights, nobles and foreign ambassadors once flocked to Stirling Castle to revel in its grandeur with its superb sculptures and beautiful gardens. It was a favoured residence of the Stewart kings and queens who held grand celebrations from christenings to coronations.

For more than 800 years, Carrickfergus Castle has been an imposing monument on the Northern Ireland landscape. The castle now houses historical displays as well as cannons from the 17th to the 19th centuries. 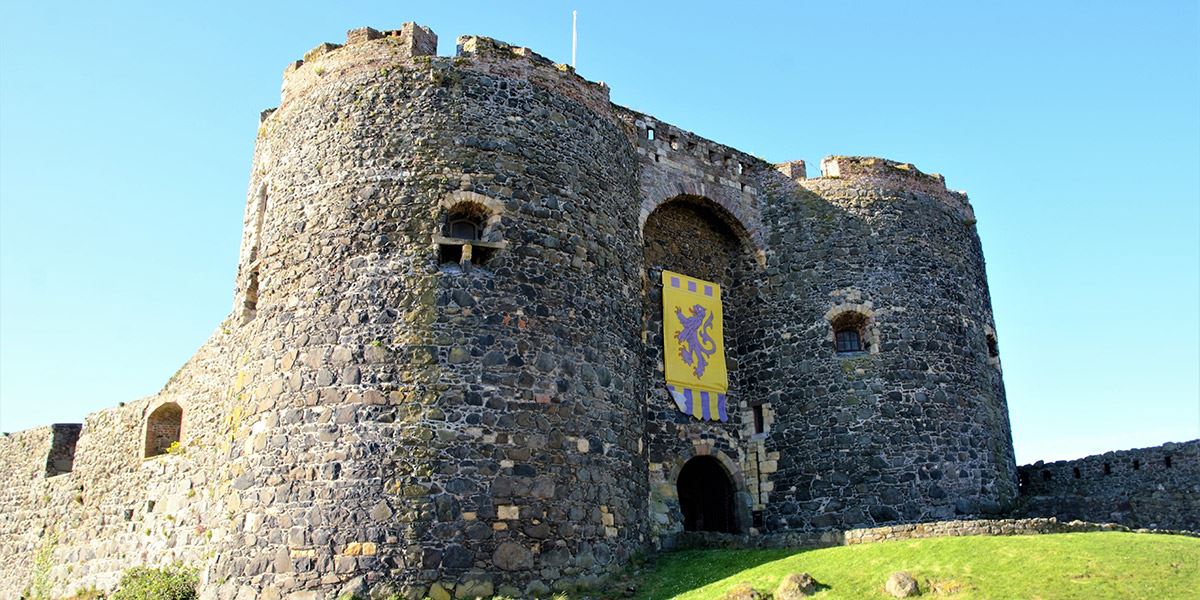 The magnificent Carrickfergus Castle was built over 800 years ago

The castle was built in 1177 by the Anglo-Norman knight John de Courcy, after he invaded Ulster. The castle itself has changed hands multiple times, from the Normans to the Scots and then the English, it is a reflection of the changing times. It has also been the stage of some defining moments in history.

Windsor Castle lies 23 miles west of central London and is a working palace, all of which is in use and much of which opens to the public, depending on the time of year and the Queen’s schedule. 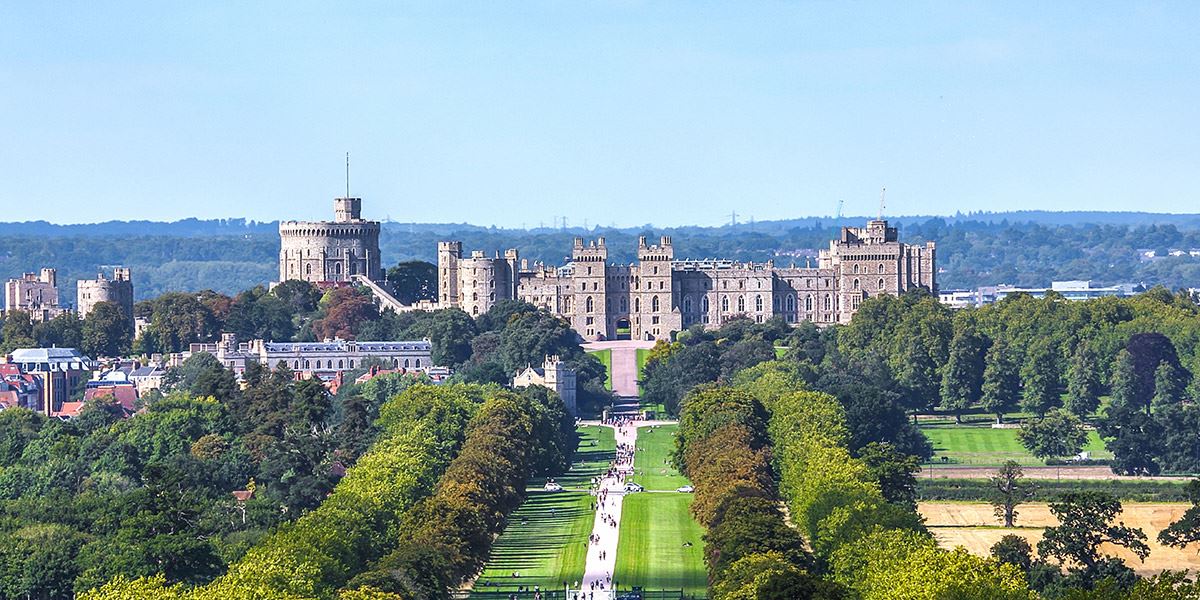 It’s her much-loved refuge from public life and represents an extraordinary continuity: the annual Garter Day links back to the Order of the Garter’s foundation in 1348, 16th-century St George’s Chapel is in daily use, and the private royal apartments are busy at weekends, for ‘Easter Court’ in April, and for Garter Week and Royal Ascot every June.

At Bamburgh Castle, you can uncover hundreds of years of history in the various rooms and in the 12th-century keep – the oldest surviving part of the castle. There is plenty to take in around the extensive grounds, including cannons, the ruins of St Peter’s Chapel, striking views of the sea, medieval games and its Archaeology Museum, one of the most important Anglo-Saxon archaeological sites in the world. 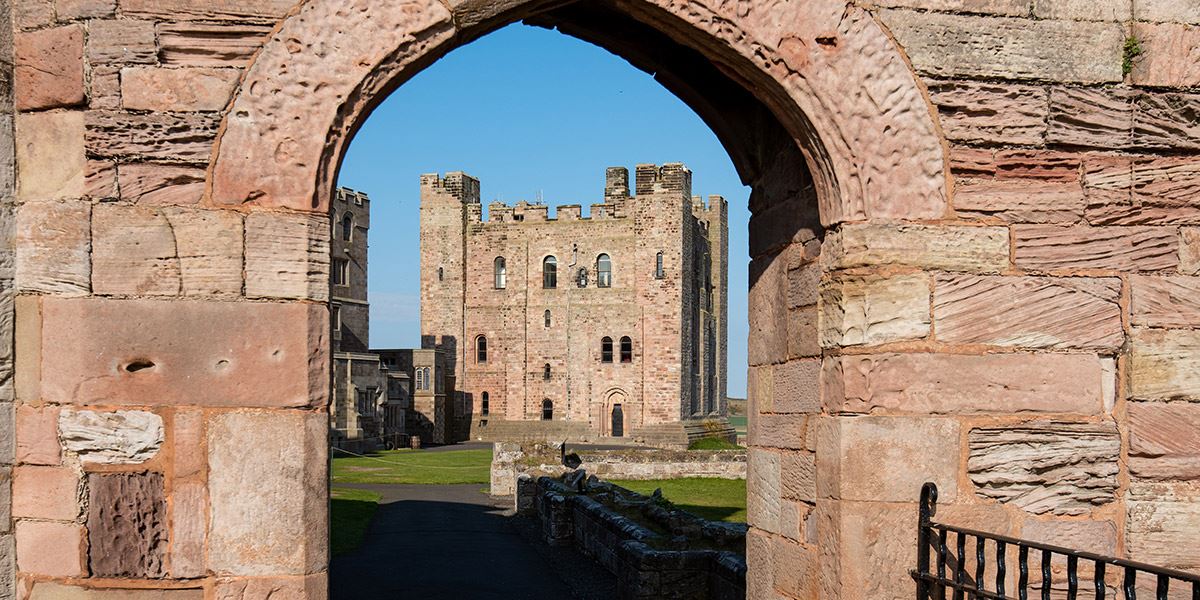 Uncover hundreds of years of history at Bamburgh Castle

Bamburgh Castle can trace its earliest recorded history back to AD 547 when Ida the Flamebearer and first of the Anglo Saxon Kings of Bernicia, lay the timbers of a fortified wooden stockade on the towering escarpment 150ft above the North Sea. The sixth-century kings of Northumbria chose Bamburgh as their royal capital, and it was to play a central role in nearby Lindisfarne and the surrounding area becoming a cradle of early Christianity in England.

One of Britain’s most iconic and evocative survivors of the English Civil War, partially demolished in 1646 by the Parliamentarians. Gallantly defended by Lady Bankes, this Royalist strongholdb in Dorset withstood a Cromwellian siege for six weeks.

A favourite haunt for adults and children alike, all ages are captivated by these romantic castle ruins with breathtaking views across Purbeck. Discover 1,000 years of history at Corfe Castle as a royal palace and fortress. With fallen walls and secret places, there are tales of treachery and treason around every corner.

A trip to Scotland’s capital isn’t complete without a visit to Edinburgh Castle. Part of The Old and New Town and standing majestically on top of a 340 million-year-old extinct volcanic rock, the castle is a powerful national symbol. Great events have taken place within its wall and it has witnessed many sieges.

To control Edinburgh Castle was to hold the keys to the kingdom. During the Wars of Independence the castle changed hands many times. In 1314 it was retaken from the English in a daring night raid by Thomas Randolph, nephew of Robert the Bruce. 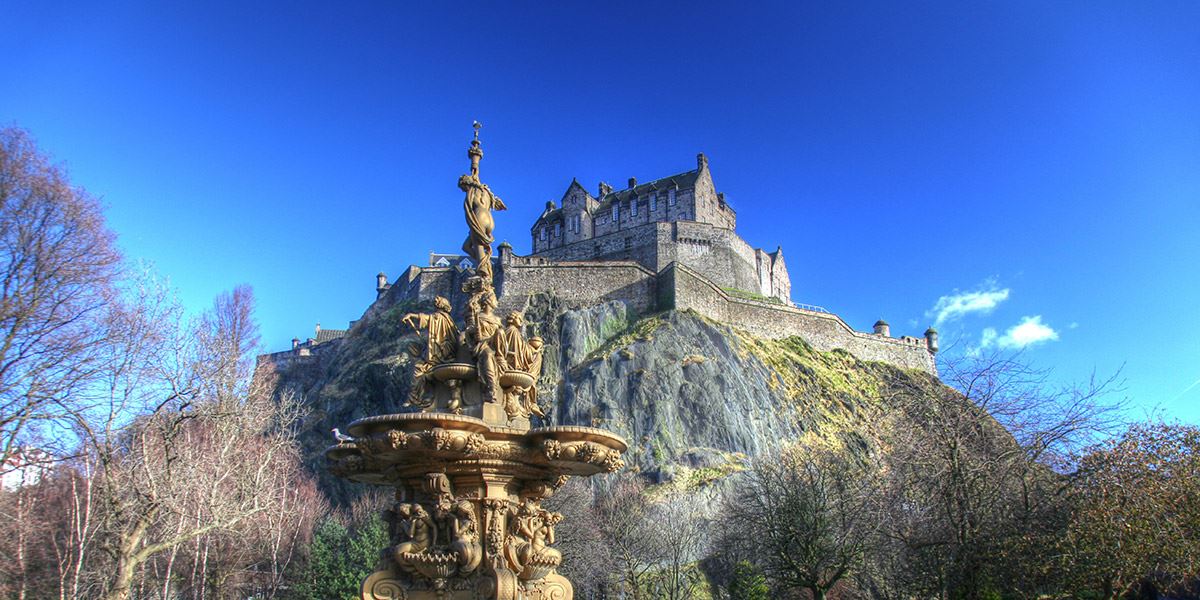 Edinburgh Castle is built on top of an ancient inactive volcano

The castle was home to kings and queens. Queen Margaret (later St Margaret) died here in 1093, and Mary Queen of Scots, gave birth to James VI in the royal palace in 1566. Her great-great-great grandson Charles Edward Stuart – Bonnie Prince Charlie – captured Edinburgh but couldn’t take the castle during the 1745-6 Jacobite rising. In 1996, the Stone of Destiny, on which kings were enthroned for centuries, was returned to Scotland and is displayed in the Crown Room.

With 500 acres of beautiful parkland and formal gardens, daily activities, free flying falconry displays, special events and year round attractions, Leeds Castle is one of the best days out on offer in Kent. Leeds’ appeal lies in its stunning external appearance and setting, half on an island in the middle of a lake.

Leeds Castle has been a Norman stronghold; the private property of six of England’s medieval queens; a palace used by Henry VIII and his first wife Catherine of Aragon; a Jacobean country house; a Georgian mansion; an elegant early 20th century retreat for the influential and famous; and in the 21st century, it has become one of the most visited historic buildings in Britain.

Floors Castle in the Scottish Borders has been welcoming visitors for over 40 years and one of its main attractions is that it is still a family home. This gives Floors Castle such life and charm and it sets it apart from most historic houses. Built for the 1st Duke of Roxburghe in 1721, it has undergone periodic change to create the dramatic building you see today. 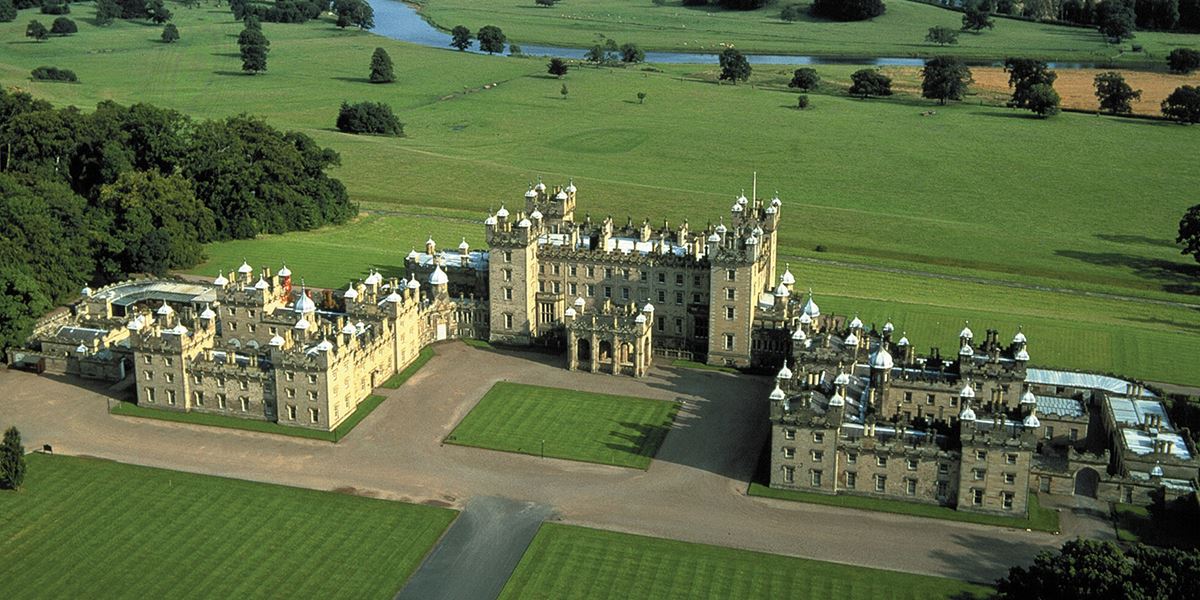 Visit this stunning castle and see for yourself the collection of fine art, porcelain, newly restored tapestries, grand rooms and superb views. There are also woodland and riverside walks, formal and informal gardens and lots of lovely places to sit and watch the world go by.