How to spend 48 hours in London

London is a big city so, if you only have a couple of days to explore, here’s how to make the most of your time in the capital.

Start by fuelling up for your jam-packed, 48-hour itinerary with a proper English breakfast and order a fry-up; you’ll find cafes and pubs serving a ‘full English’ all over the city but Hawksmoor Guildhall is renowned for its gut-busting offering.

After breakfast, stroll around the financial district – the true ‘City’ of London. If it’s a weekday, then there will be plenty of ‘City’ types glued to their phones on every corner. At weekends, the area is pretty sleepy by comparison. Make sure you stop at the beautiful, domed St Paul’s Cathedral (it’s hard to miss), which is open to sightseers from 8.30am Monday to Saturday. A guided or multimedia, touch-screen tour of the awe-inspiring interior is included in the admission charge. 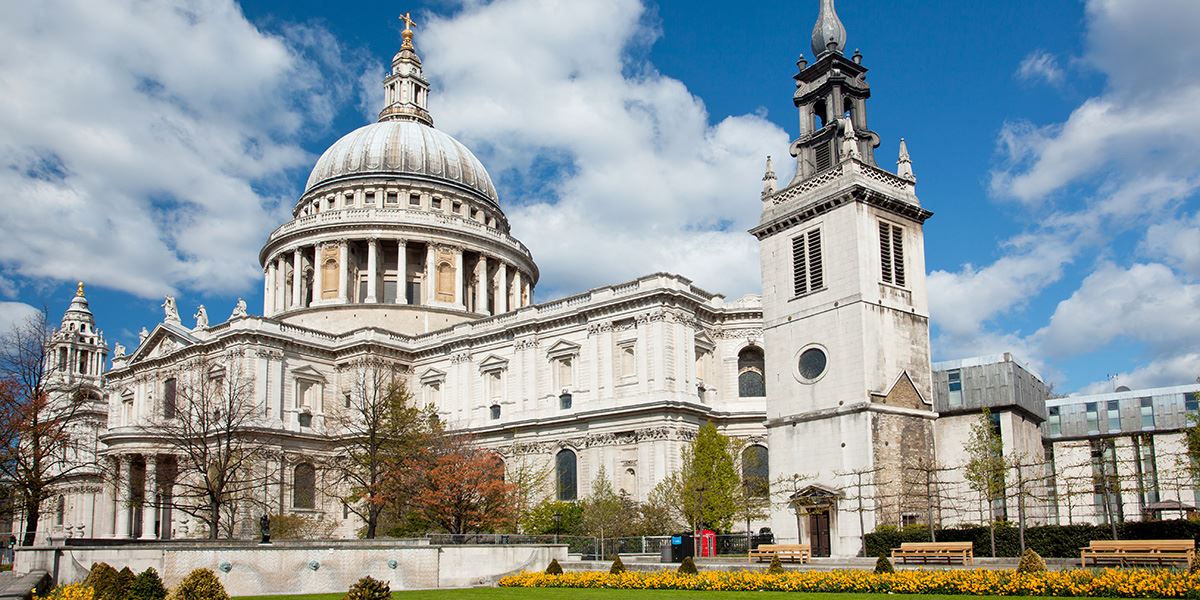 Venture down to the crypt and you’ll discover the tombs and memorials of some of the nation’s greatest heroes, such as Admiral Lord Nelson and the Duke of Wellington, and there’s also an award-winning 270-degree immersive film experience called Oculus. Before you leave, don’t forget to try out the acoustic quirks of the Whispering Gallery and, if you have it in you, climb to the Golden Gallery – the breathtaking panoramic views are worth it!

Back down on solid ground, and no doubt it will be time for a quick pit stop so head to Alchemy Café, on Ludgate Broadway, to sample one of its espressos, the beans for which come from different areas of Africa and Latin America and are then roasted in the cafe’s small roaster in South London. Oh, and they are also served in a science lab flask!

Walk across the London Bridge to the other side of the river (or catch a tube from Monument to London Bridge if you’re feeling lazy) and head to Borough Market for lunch.

Situated under the railway lines, this part-indoor, part-outdoor market runs from Monday to Saturday with the full market operating from Wednesday to Saturday. Comprising more than 100 stalls and stands, with producers from all over the country bringing a range of fresh produce including fish, British-reared meats, vegetables, ciders, cheeses, artisan breads, coffees, cakes and patisseries, you’ll be sure to find something to munch. Other stalls specialise in imported produce if you fancy something from further afield.

Comprising more than 100 stalls and stands, Borough Market has producers from all over the country bringing a range of fresh produce

Take a stroll along the South Bank’s riverside walkway stretching between London Bridge to the Queen’s Golden Jubilee Bridges – the footbridges named in honour of the 50th anniversary of Queen Elizabeth II’s accession to the throne that run either side of the Hungerford Railway Bridge.

If you start at the London Bridge end then pop into the famous Tate Modern, which is free to enter, except for some special exhibitions. A new Tate Modern building is now open just behind the original ‘power station’ museum building, which was designed by Giles Gilbert Scott in the 1950s, providing 60 per cent more space for visitors to explore.

If you start the journey from the other end then head to the Royal National Theatre, which holds daily tours exploring unseen areas of the theatre and a glimpse into the backstage world or, if you’re a film buff, stop at nearby BFI Southbank (formerly the National Film Theatre), where you can catch one of the latest art-house films or browse over 1,000 hours of free film and TV in the Mediatheque. 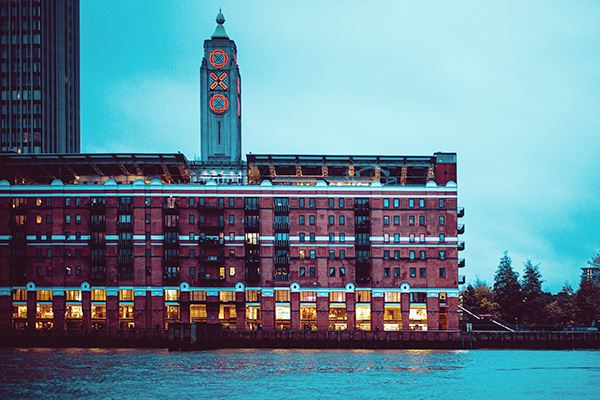 Enjoy views of the city from the Oxo Tower 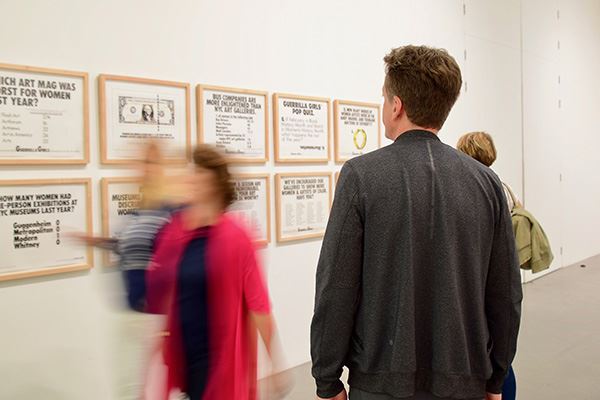 From here, head up a level and wander into the Royal Festival Hall, which often has free entertainment in the ballroom, and then descend once again to the riverside where you’ll most probably find a host of street entertainers as you meander along the promenade.

At the midway point between the two bridges, you’ll find the Art Deco-style Oxo Tower, which was designed by the stock-cube manufacturer to circumvent advertising rules. Its top floor is now occupied by an upmarket brasserie, bar and restaurant. Stop off in the bar for a tipple as you look across the river to the North Bank or, if you’re on a budget, a free public viewing gallery also provides a spectacular view of London to the north and east, and the West End.

One of the things London is most famous for is its theatre shows – alongside Broadway in New York, West End theatre represents the highest quality theatre in the world.

There are around 40 theatres in London’s ‘Theatreland’ and you’ll find everything from musicals and comedy to classic plays and serious theatrical performances. Visit the TKTS booth in Leicester Square for discount theatre ticket for on-the-day performances or you can advance-book using a range of show ticket websites. 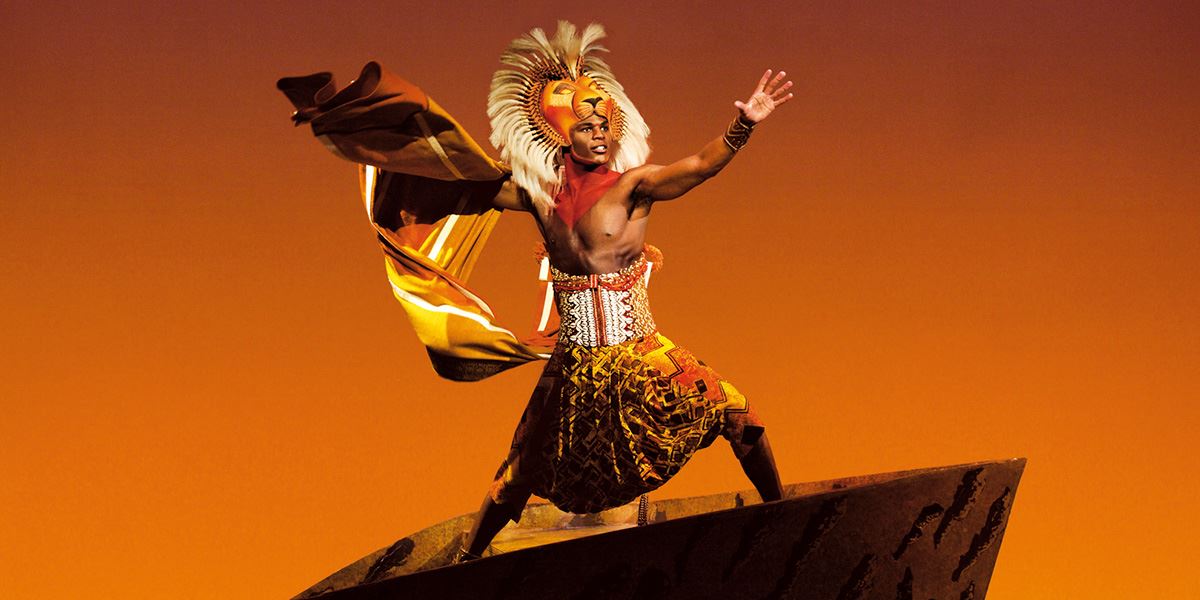 Andile Gumbi as Simba in The Lion King production

From long-running musical favourites, such as The Lion King at Lyceum Theatre just up from Strand and Les Miserables at The Sondheim Theatre on Shaftesbury Avenue to newer shows, such as Book of Mormon at the Prince of Wales Theatre off Leicester Square and The Comedy About A Bank Robbery at Criterion Theatre at Piccadilly Circus – whatever your taste, you’re bound to find something to entertain you.

After the show, head for a slap-up meal at The Delaunay on the corner of historic Drury Lane and The Aldwych. The restaurant was Chris Corbin and Jeremy King’s 2012 follow-up to the Wolseley but looks like it has been there for decades and offers chic, grand European cafe vibe with waistcoated waiting staff, green leather seating and white linen tablecloths.

Rise early and make your first stop the world-class Natural History Museum in Kensington. Before you head inside, though, pick up a coffee and pastry from one of the boutique cafes in the lanes opposite. Inside the museum, which is free to enter, you’ll find the iconic blue whale skeleton welcoming visitors in Central Hall, as well as hundreds of exciting, interactive exhibits. Highlights include the popular dinosaurs gallery, mammals display with the unforgettable model blue whale and the state-of-the-art Darwin Centre Cocoon where you can see scientists at work in the laboratories. 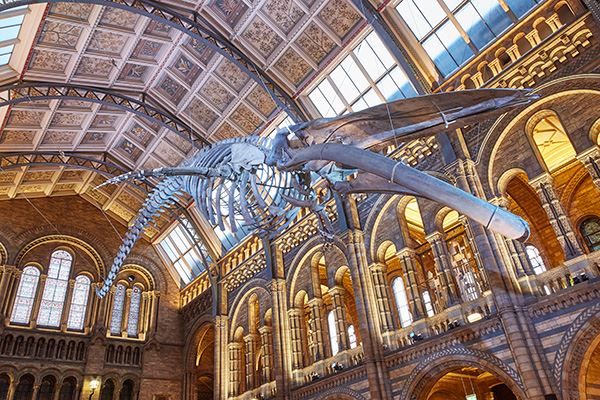 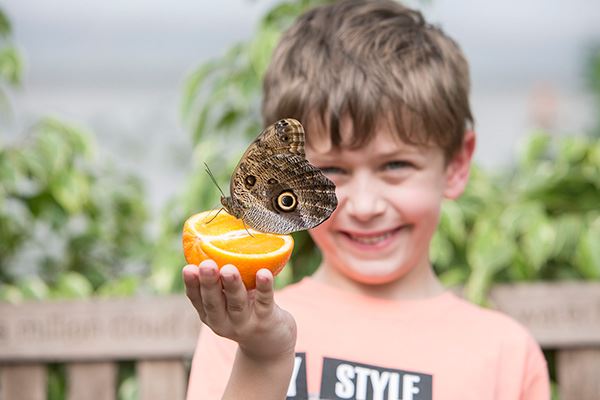 From there, head over to Hyde Park, taking the route via Knightsbridge for an insight into the lives of the rich and famous. On the edge of the park, you’ll find a residential development called One Hyde Park, which contains some of the most expensive apartments in the world. At 350 acres, Hyde Park is one of London’s biggest parks so you could spend all day exploring but, with so much more to get through, head straight for the Serpentine in the middle of the park, where, between April and October, you can rent a pedalo or rowing boat or take a ride on the UK’s first Solarshuttle which glides silently across the lake powered only by the sun.

In London, lunch is “so last year” – brunch is the trendy thing to do. You’ll find a brunch menu on offer at eateries across the capital and many offer a bottomless drink option, allowing you to wash down your choice of mid-morning dish with copious glasses of Bloody Mary or Mimosa.

Head to Covent Garden for a stroll around the cobbled piazza. As well as the shops which line the 19th-century square and the streets leading off it, there are also three markets. The Apple Market is found in the North Hall of the Market Building and sells British-made crafts, jewellery and leather goods, while East Colonnade Market has a variety of stalls selling products such as hand-made soap, jewellery, handbags, hand-knitted children’s clothing, magic tricks, sweets, artwork and homewares. In the South Piazza the Jubilee Market changes its wares daily. On Mondays the market is dedicated to antiques, from Tuesday to Friday a general market operates with traders selling clothes and household goods and at weekends the market offers arts and crafts.

Once you’ve picked up a souvenir or two head for a spot of quintessentially-English afternoon tea. This indulgent pastime comes in various guises across London, from classic tea, sandwiches, scones and pastries served in pretty tea pots and on tiered cake stands at establishments such as The Ritz, The Dorchester and The Savoy, to quirkier versions which offer an alternative to the traditional. 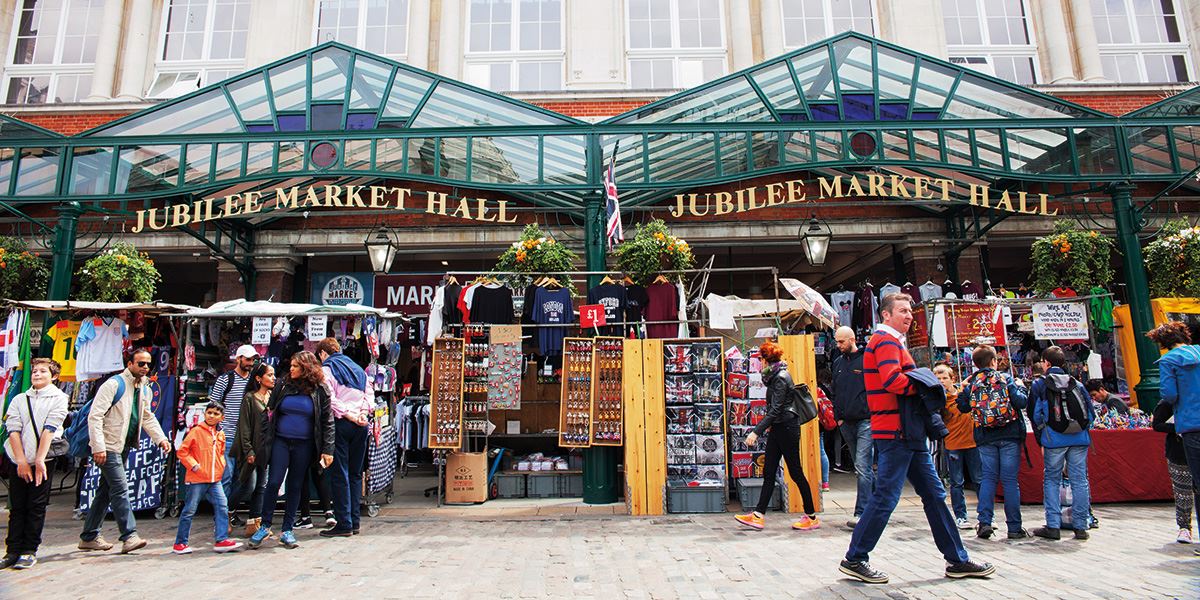 Pick up a bespoke gift in the market at Covent Garden

The Berkeley Hotel in Knightsbridge, for example, offers Pret a Portea for the fashion-focused with a menu that changes every six months to reflect current fashion trends, while Momo, on Heddon Street, behind Regent Street, offers a Moroccan version served in a atmospheric souk-style restaurant with mint tea, savoury Maghrebine pastries, cheese briouats and zaalouk and mechouia (tomatoes and aubergines) on toast. Sweets are a fusion of French-inspired macarons and scones with North African fig jam.

At the pantry of boutique hotel, 108 Marylebone, there’s a healthy afternoon tea featuring sandwiches made with gluten-free bread and gluten-free brownies and for those who are easily bored with their surroundings, you can jump aboard a traditional London double decker bus for tea as you tour the city and take in landmarks, such as Buckingham Palace and Nelson’s Column.

On Mondays the market is dedicated to antiques, from Tuesday to Friday a general market operates with traders selling clothes and household goods and at weekends the market offers arts and crafts

As evening approaches, head east to The Shard – officially the tallest building in western Europe at over 1,000 feet. At its summit is The View from The Shard, and sunset is the best time to visit. Make the trip up to the top before darkness descends to take in a view of everything within a 40-mile radius, and then watch the sun sink and the city’s skyscrapers and Canary Wharf light up the night.

You’ll probably still be a little full from afternoon tea so take a wander towards Soho to check out one of its many Speakeasy bars. These underground bars usually require a pre-booked reservation, which you can make online or your hotel can help you, and you will be supplied with a password, which you’ll need to tell the doorman in order to gain entry.

Some of these bars are quite theatrical – at Cahoots, a disused underground station in Kingly Gate off Carnaby Street, you’ll be faced with staff dressed in 1940s attire – while others involve opening a large Smeg fridge door or flushing a toilet to gain entry! 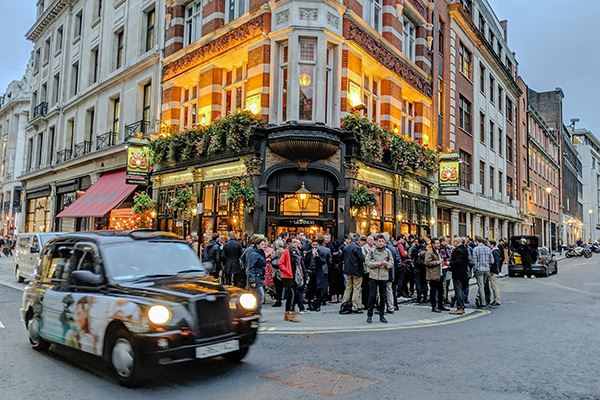 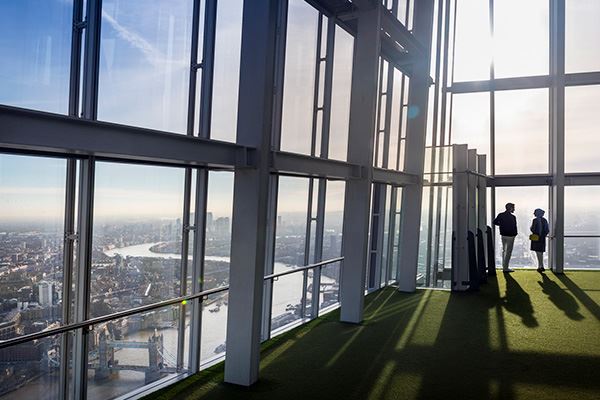 Take a trip up to The Shard Viewing Gallery

Still not hungry enough for a full-blown dinner? Then head to Bubbledogs, on Charlotte Street in Fitzrovia. Meeting the current trend for posh junk food, this bar serves 17 different styles of hot dog alongside champagne and posh wine.

If you fancy something a little more substantial, however, then head to Duck & Waffle on the 40th floor of The Heron Tower at 110 Bishopsgate for dinner in the highest restaurant in the UK with fabulous views of the city including landmark buildings, such as The Gherkin. Inspired by broad European and British influences, the restaurant’s menu places emphasis on local, rustic, seasonal and sustainable British ingredients, manifested in daily inspirations created from Bishopgate Market’s freshest offerings. It’s also open 24 hours a day so you can sample dishes, however late you happen to stay out exploring London’s nightlife.