Edinburgh is world-renowned for its magnificent architecture – from the grandeur of the Georgian New Town to the closes and wynds of the historic Old Town, the monuments of Calton Hill to Edinburgh Castle at the top and the Palace of Holyroodhouse at the bottom of the Royal Mile. Rich in history, the city has known battles and plague, poverty and great riches, religious persecution, grave robbers, The Enlightenment, The Union and eventual devolution and its history has shaped its streets and buildings.

Complementing the built environment, and often inspired by it, is the literary heritage of the city. Authors, writers, poets and thinkers have lived and worked in Edinburgh through the ages, from James Hogg, Walter Scott, Robert Burns and Robert Louis Stevenson to modern day authors Ian Rankin, JK Rowling, Iain Banks, Irvine Welsh and Alexander McCall Smith. The stories are in the stones, streets and monuments, and visitors and residents alike can wander through Edinburgh’s streets soaking up the atmosphere that has inspired so many.

Where else can you follow in the footsteps of Rankin’s Inspector Rebus or explore the locations found in McCall Smith’s 44 Scotland Street series? Where else can you learn about Deacon Brodie, respected cabinet maker by day, thief by night and the inspiration for Dr Jekyll & Mr Hyde, or find out more about Joseph Bell, the surgeon whose diagnostic approach to cases inspired the character of Sherlock Holmes? Which other city has named its railway station after a novel? Or one of its football teams? 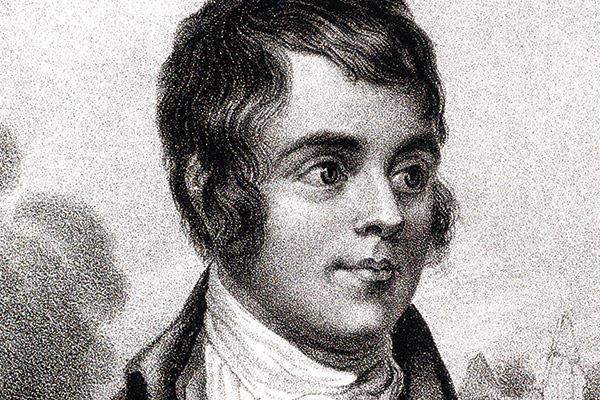 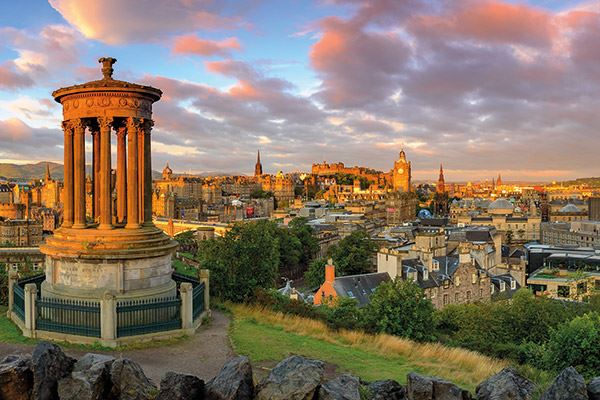 Edinburgh was the first UNESCO City of Literature in the world, receiving the designation in 2004. The idea of a formal ‘City of Literature’ designation came about because four book lovers thought that Edinburgh, and indeed Scotland, should take on responsibility for the future development of a literary culture that has distinguished and enlightened our country’s past. They wanted to share the literary culture of this capital city with the world, to celebrate the literary greats of the past and to embrace and encourage future literary developments.

Edinburgh was proposed not as the city of literature but as part of a growing network of cities. The idea was not about competition but about aspiration and partnership. This marked the beginnings of a global enterprise, a network of cities of literature celebrating, sharing and developing their literary culture and Melbourne has recently joined Edinburgh to become the second UNESCO City of Literature with other cities expected to follow shortly.

Edinburgh was the first UNESCO City of Literature in the world, receiving the designation in 2004

The Edinburgh UNESCO City of Literature Trust is the driving force behind the city’s efforts to share and expand its literary culture and as well as co-ordinating a wide range of literary activities and events, the Trust runs a city-wide reading campaign every year.

Each February, Edinburgh’s residents are encouraged to all read the same book at the same time. Thousands of free books are given away through libraries, schools, community centres, shops, cafes and restaurants and there is a full programme of events, including performances, films, readings, debates, discussions and tours. 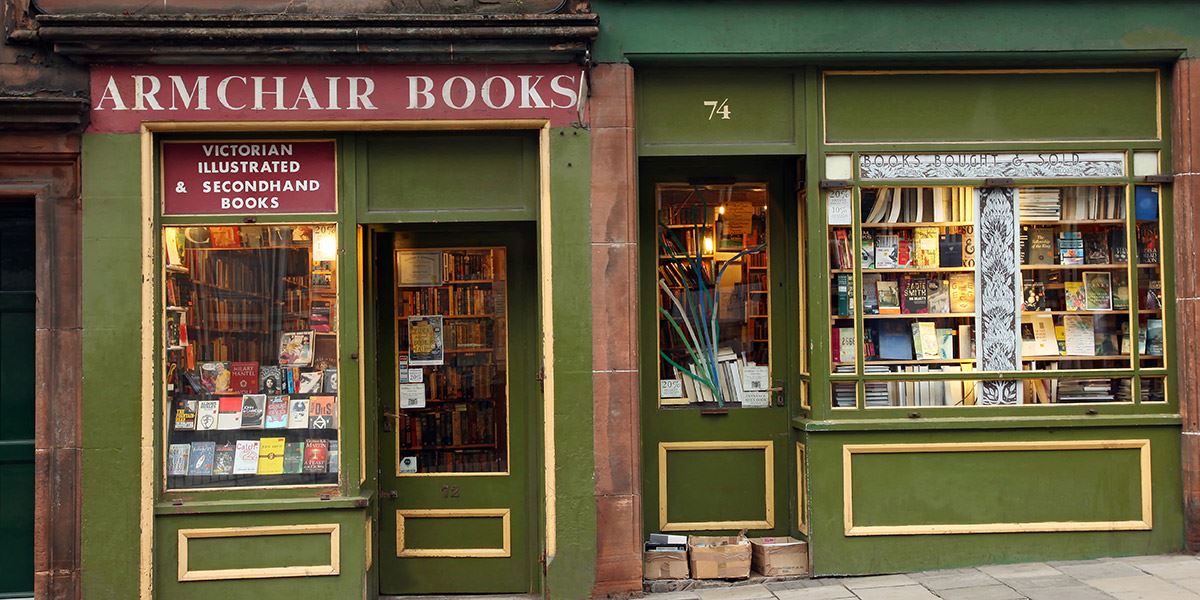 The author is usually Scottish, often from Edinburgh or with strong Edinburgh connections, and the book is chosen to appeal to the widest possible audience. In previous years titles have included Robert Louis Stevenson’s classic Scottish adventure story, Kidnapped, and the darker and gothic Strange Case of Dr Jekyll & Mr Hyde, which, although set in London is clearly inspired by some of Edinburgh’s most notorious characters as well as the duality of the city itself.

In 2009, Edinburgh collaborated with other cities around the UK including Bristol and Glasgow in a country-wide reading campaign featuring Arthur Conan Doyle’s The Lost World, celebrating not only the 150th anniversary of Conan Doyle’s birth (in Edinburgh) but also the bicentenary of the birth of Charles Darwin, whose theories of evolution are explored in the book.

Each February, Edinburgh’s residents are encouraged to all read the same book at the same time

Edinburgh is also host to the largest public celebration of words in the world – the Edinburgh International Book Festival, which takes place in the heart of the historic city each August. Started in 1983, it regularly brings over 800 writers to the city from 45 different countries. The Book Festival takes place in an ever-expanding tented village in the tranquil oasis of Charlotte Square Gardens in the heart of the New Town.

The first choice of venue in 1983 was Princes Street Gardens. However an ancient by-law (now repealed) prohibiting the sale of books and printed materials in the Gardens meant that Charlotte Square became the home of this, the largest public book festival in the world. Over 250,000 visitors enjoy discussions, readings and Meet the Author sessions with authors, poets, journalists, commentators, politicians, photographers and illustrators from all over the world. 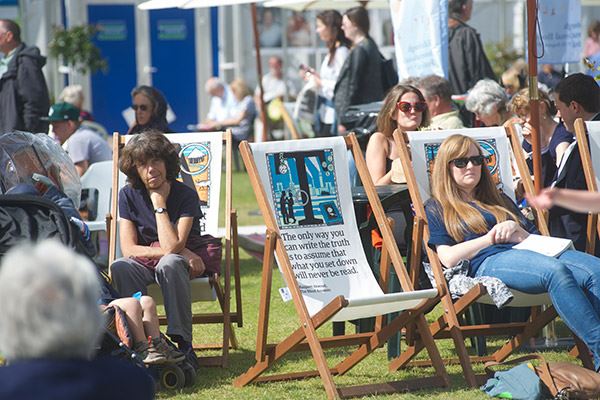 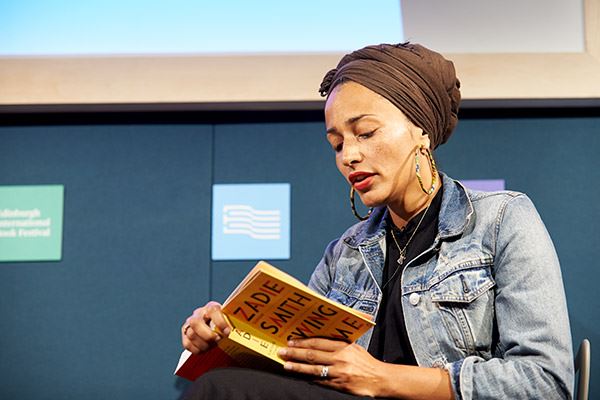 The Book Festival has developed a series of high profile debates and discussions which have become one of the hallmarks of this wonderful occasion. Each year internationally-renowned authors join newly-published writers to become part of this unique forum in which audience and author meet to exchange thoughts and opinions on some of the world’s most pressing issues.

Running alongside the general programme is the highly-regarded Children’s Programme which has grown to become a leading showcase for children’s writers and illustrators. Incorporating workshops, storytelling, panel discussions, author events and book signings, the Children’s Programme is popular with both the public and schools alike, and now ranks as the world’s premier books and reading event for young people.

Edinburgh is full of great literary organisations where people in the city can get involved with words. The National Library of Scotland on George IV Bridge is Scotland’s largest library, and holds over 14 million printed items. The library also houses the John Murray Archive. Edinburgh-born John McMurray established the publishing house of John Murray in 1768. Over seven generations the firm grew to become one of the world’s greatest publishers.

The firm’s historical archive (to 1920) consists of over 150,000 items representing the lives and works of many great writers in the fields of literature, science, politics, travel and exploration. Among the circle of authors and correspondents (well over 16,000 in all) represented in the Archive are writers as diverse as Lord Byron, Jane Austen, Charles Darwin and David Livingstone. An exhibition of some of the contents of the Archive is open to the public. 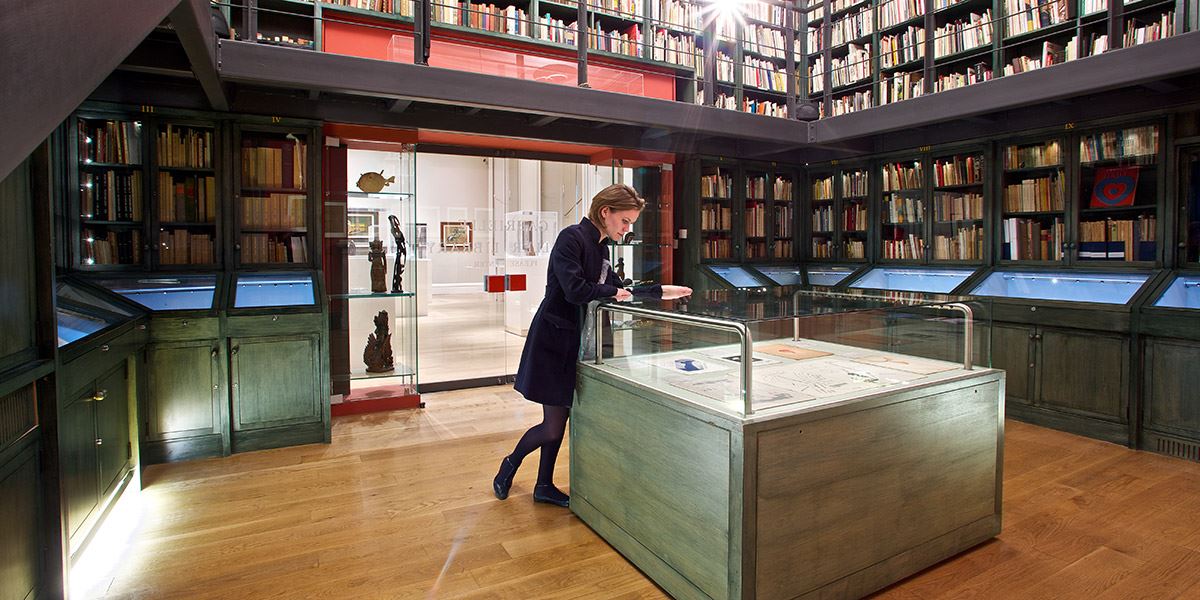 Library at the Scottish National Gallery of Modern Art

The Writers’ Museum showcases three of the country’s finest writers: Robert Louis Stevenson, Robert Burns and Walter Scott. Other prominent Scottish writers, including contemporary authors, are featured in the museum’s programme of temporary exhibitions. The courtyard immediately outside The Writers’ Museum has been designated as Makers’ Court and celebrates the lives and works of Scottish writers. Each of the writers is commemorated by a quotation inscribed in stone and set in the paving of the courtyard. The Scots word Makar stresses the role of the poet or author as a skilled and versatile worker in the craft of writing. Edinburgh has adopted its own version of the Poet Laureate: the Edinburgh Makar.

In the growing Literature Quarter on the Royal Mile nestles the Scottish Storytelling Centre, home to a theatre and bright cafe as well as creative exhibitions and events, and the Scottish Poetry Library, the light and welcoming home to a vast selection of poetry books and pamphlets, which regularly brings in poets for evening events.

In addition to the museums and libraries, Edinburgh celebrates its literary roots in a wide variety of ways. A number of literary walking tours have developed where visitors can wander through the streets, on a Book Lovers Tour, or a Literary Pub Crawl. If you have a favourite author or book, you may enjoy the Trainspotting tour, or the Rebus Tour. The Edinburgh UNESCO City of Literature Trust has developed a series of free walking tours – the first of which takes in a number of the locations featured in Alexander McCall Smith’s 44 Scotland Street series.

Around every corner, you can find reminders of Edinburgh’s writers, past and present – poet Robert Fergusson is striding down The Royal Mile outside the Canongate Kirk, Sherlock Holmes himself stands on Picardy Place, the birthplace of his creator, Arthur Conan Doyle. Alan Breck and David Balfour, the two heroes of Robert Louis Stevenson’s Kidnapped, stand proud on the Corstorphine Road, and a small memorial to Stevenson himself stands in a grove of silver birches in Princes Street Gardens. 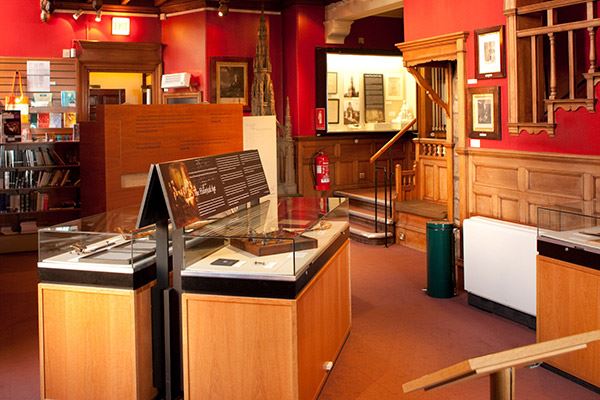 The Writers’ Museum showcases three of the country’s finest writers 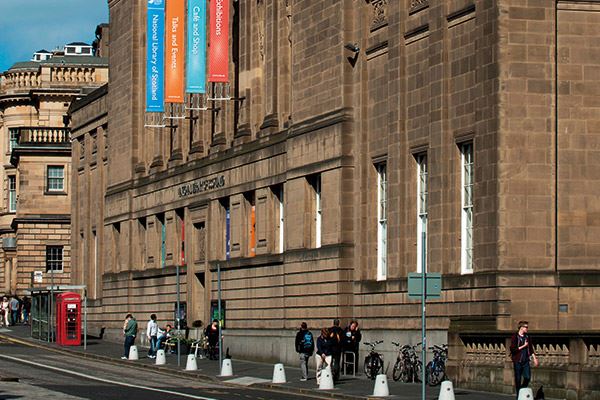 The National library of Scotland

The most prominent is the monument to Sir Walter Scott, towering over Princes Street and Princes Street Gardens. It’s well worth the trip up the narrow and twisting stair to the top for the views across the city. The Scott Monument is one of Edinburgh’s architectural treasures featured in a series of podcasts on the City. The City of Literature Trust has collaborated with the Edinburgh World Heritage Trust to create ten short podcasts exploring some of Edinburgh’s most famous landmarks, their architectural history and curiosities and their literary links – from Calton Hill to Princes Street Gardens, The Netherbow to The Canongate, from Robert Louis Stevenson to Daniel Defoe, Ian Rankin to Quintin Jardine.

Using quotes from writers, poets and some of the classic stories inspired by the built environment of the city, the podcasts are designed to provide a guided tour of Edinburgh, revealing some of the hidden gems and history of the city for visitors walking around the streets, or at home planning their trip. Or even for the city’s residents, wanting to know a little more about the landmarks they pass every day. Another addition to Edinburgh’s literary scene is the Poetry Garden in St Andrew Square, in the heart of the Georgian New Town.

A celebration of everything literary

St Andrew Square, which is now open to the public for the first time in over 230 years, has been developed as a new space for celebrating poetry in the City of Literature. Edinburgh has a long history as an international centre of learning. Today, the city’s universities and colleges play host to creative writing courses, renowned academics, theatre work and many more specialised projects. The city’s libraries run book groups and competitions, with knowledgeable librarians and specialised courses ranging from Scots language to more general discussion groups. If you are in Edinburgh, you can borrow books at any one of the 26 lending libraries, part of a network of 140 library and information services that are housed in the city.

The designation UNESCO City of Literature is a permanent one, and one of which the city of Edinburgh is justifiably proud. From the writers of the past, celebrated in statuary, in the National Library and The Writers’ Museum, to contemporary authors found in the Scottish Poetry Library, The Scottish Book Trust or the Scottish Storytelling Centre, and showcased at the Edinburgh International Book Festival, a thriving publishing industry, and a strong academic element, there is much to be proud of. 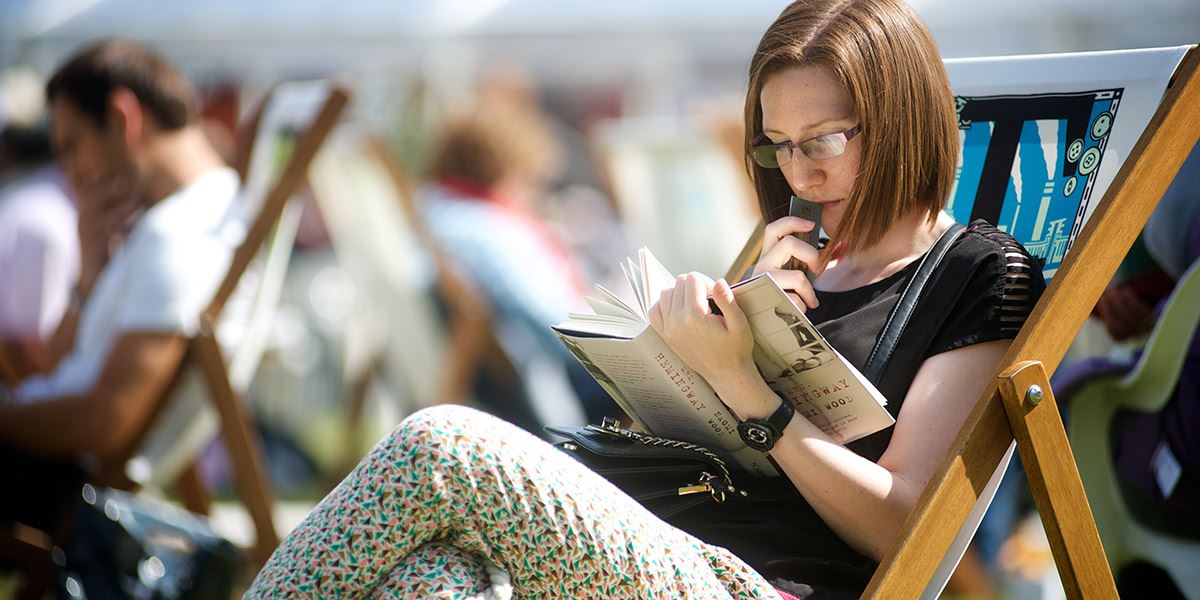 Residents and visitors alike cannot help but brush up against the city’s literary heritage whenever they walk through the streets. And Edinburgh is a city for walking. Whether following one of the free literary trails, or just wandering where the mood takes you, come and be inspired by the stories in the stones.