With its rejuvenated river frontage, host of world-class museums and art galleries, stunning Georgian streets, and history dating back to at least Roman times, Newcastle has plenty to keep even the fussiest visitor happy. But sometimes a breath of sea air is just what the doctor ordered.

Break away from the city

The Romans chose well when they decided to bridge the River Tyne at the spot where modern day Newcastle-Gateshead now stands. Nearly 2,000 years on, and the area that grew up around the Pons Aelius – the name the Romans gave to their bridge – is a vibrant and thriving commercial and cultural hub that owes much to the mighty River Tinea (to give the Tyne its Latin name) on which it stands. And not just because of the immense wealth that over the centuries has flowed in and out along the waterway.

Newcastle-Gateshead also happens to be perfectly placed to make the most of the surrounding countryside. Just a short car journey north, south or west and you’ll find yourself in the rolling, heather clad hills and lush valleys of County Durham and Northumberland, dotted with picture postcard villages and historic market towns. 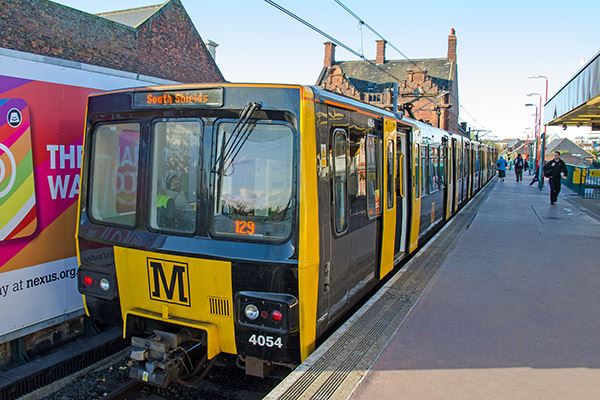 It’s easy to catch a Metro to the coast 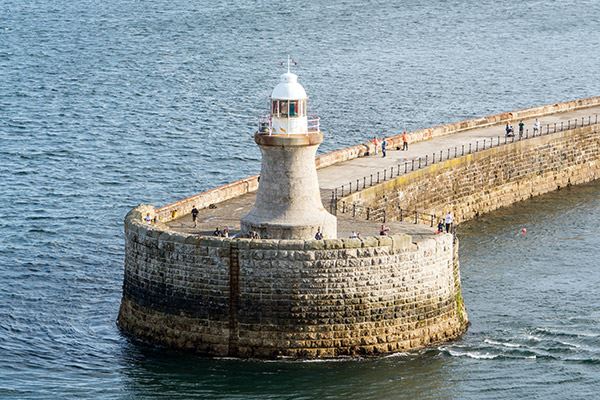 Alternatively, hop on the Tyne and Wear Metro which runs along the banks of the River Tyne to where it meets the North Sea at Tynemouth, and then travels on to Cullercoats and Whitley Bay, before looping back to the city. It’s just a 20-minute train ride from Monument in the centre of Newcastle to the coast with its beautiful unspoilt beaches, sweeping views, promenades, ancient ruins, surfing, and award-winning bars, cafes and restaurants, where you can sate your appetite after a day breathing in the fresh sea air, or hang out when the weather takes a turn for the worst. People are often astonished to discover that such a spectacular and largely unspoilt stretch of coastline exists just eight miles as the crow flies from such a major conurbation. It’s yet another of the many surprises Newcastle-Gateshead has to offer.

The journey for most starts in the popular village of Tynemouth (not to be confused with Teignmouth, more than 160 miles away on the Devon coast). As the name suggests, Tynemouth is perched at the mouth of the River Tyne. Regularly cited as one of the best places to live, Tynemouth is a bustling and character-filled village. It’s centred around Front Street with its delightful Georgian and Victorian town houses, leading up to the ruins of an ancient priory and castle standing tall on a craggy headland. This distinctively wide street is where you’ll find Tynemouth’s celebrated independent shops and colourful cafes, bars and restaurants.

The Green Ginger Arcade is a converted church that now houses an eclectic mix of boutiques, cafes and bars, including Alfie and Fin’s Gin Bar, offering more than 100 different options, and The Blind Pig 1920s-themed speakeasy. Head into Front Street proper and there’s Children of the Revolution, with its Geordie-themed range of baby and kids wear, and unusual gifts, and Razzberry Bazaar, celebrating originality and individuality with its Eastern-inspired fashion, homeware, and accessories.

On Percy Park Road, just off Front Street pop into the acclaimed independent fashion outlets Ruby and Frank and Flamingo and Finch, gift shops Fezziwigs and Artichoke, and Tribe which specialises in organic on-trend children’s wear, from baby to age ten and with brands including Frugi, Pigeon and Kite, plus a wide range of ethical toys and gifts. With lots to choose from, including gorgeous wooden toys, a fun recycled plastic range and plenty of options to keep creative minds busy, it’s well worth a visit. On a weekend the famed Tynemouth Market with its antique, craft, and food and drink stalls, holds court in the Metro Station just a few minutes’ walk from the centre of the village. 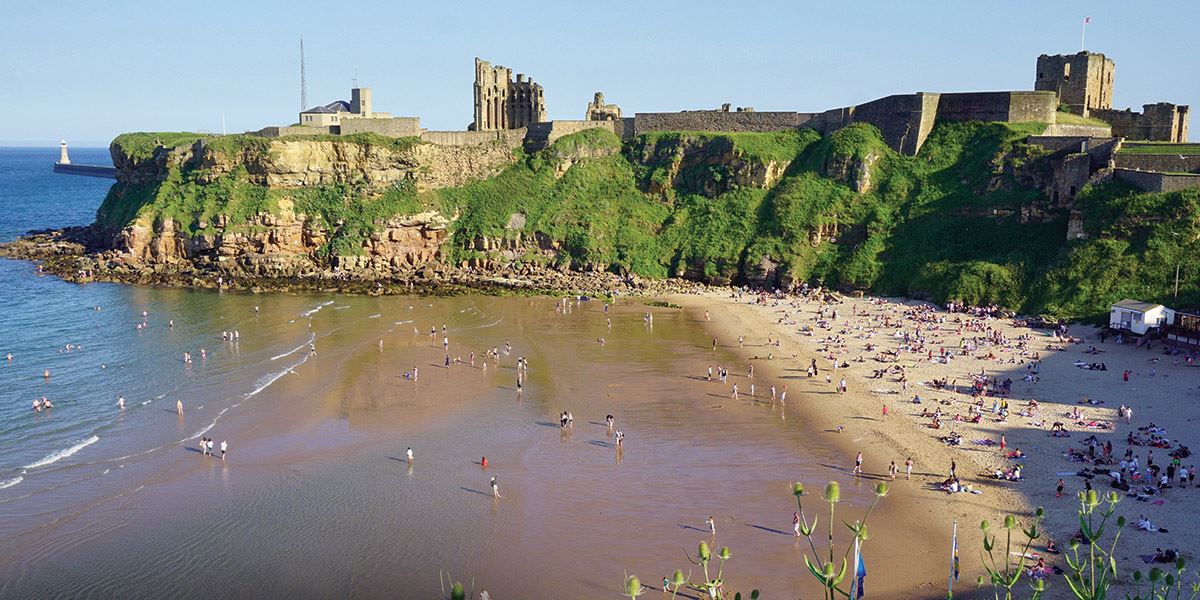 A short stroll along the river will take you to the historic North Shields Fish Quay where you can dine at Lobo Rojo, which offers authentic Mexican street food in relaxed and beautifully decorated atmosphere. From tacos, margaritas, bespoke cocktails and burritos to specials inspired by Mexican classics and fusions, Lobo Rojo aims to bring authentic Mexican flavours (freshly prepared daily) to this unassuming coastal town.

Or why not head back to Front Street for a slice of home-made cake and a latte made with Tynemouth Coffee Company beans, at the ultra-stylish Dil and the Bear cafe, or relax over a cup of tea and hand-made artisan chocolate or indulgent brownie at Gareth James Chocolatier? If you fancy something spicier, Pan Asia will hit the spot with its freshly-made curries and salads, or for more traditional seaside fare, the award-winning Longsands Fish Kitchen run by well-known North East chef Simon Walsh, has both a take-away and sit-in menu offering everything from traditional cod and chips to daily seafood specials.

On a weekend the famed Tynemouth Market with its antique, craft, and food and drink stalls, holds court in the Metro Station just a few minutes’ walk from the centre of the village

A wealth of activities

No visit to Tynemouth is complete without a trip to its famed beaches. Both King Edward’s Bay nestled beneath the Priory and Castle, and Longsands, with its mile long stretch of golden beach backed by dunes, are just a short walk from the village.

Longsands is a surfing hub, and Tynemouth has produced some of Britain’s best-known surfers in Nigel Veitch and Gabe Davies. Bring your own board or hire one from the Tynemouth Surf Co or the Longsands Surf School, which are both situated on the seafront. 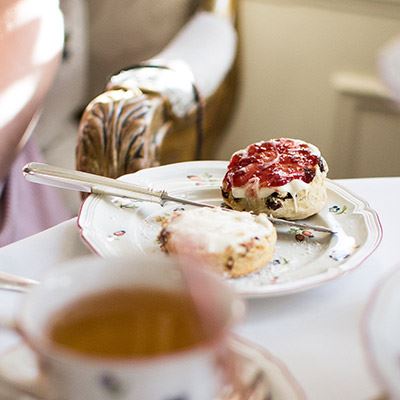 Treat yourself to afternoon tea 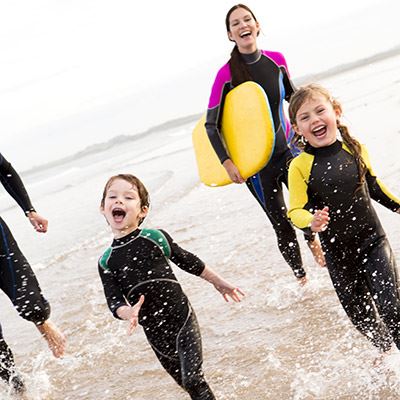 Hit the surf at Longsands 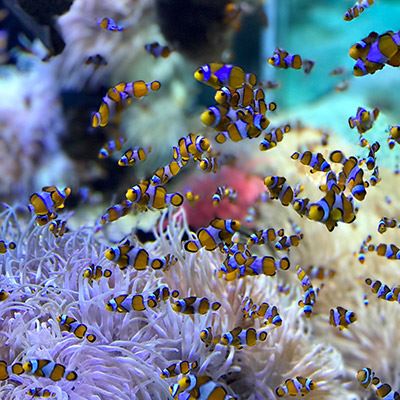 Tynemouth Aquarium is a must for kids

You can make a day of it without leaving Tynemouth’s beaches. Longsands is home to both Crusoe’s cafe and its sister eatery, The View, which as the name suggests boasts an enviable outlook over the beach towards Tynemouth Priory and Castle and the North Pier. Just a short hop around the headland in King Edward’s Bay is the celebrated Riley’s Fish Shack with its simple, seasonal seafood menu.

For something more ostentatious, the Grand Hotel overlooking Longsands, serves traditional afternoon tea set against scenic views of the coast. A leisurely amble along the promenade will take you to the Tynemouth Aquarium with its rays, coral reef fish, seals, monkeys and lizards. A great wet weather escape.

Longsands is a surfing hub, and Tynemouth has produced some of Britain’s best-known surfers in Nigel Veitch and Gabe Davies

The small fishing village of Cullercoats offers more attractions with its sheltered, crescent-shaped beach enclosed by small piers. Still a working fishing harbour, the beach is backed by low cliffs, a marine laboratory, and a Victorian lifeboat station.

There are plenty of places to eat and drink overlooking the bay, including the Beaches and Cream coffee shop, The Salt House, offering tapas and Basque-type canapes called Pintxos, High Tide, with its seasonally-changing menu and home-made pizzas, and The Boatyard, which specialises in locally-sourced food and cakes.

If you want to take home a keepsake, artist Joanne Wishart has her studio gallery on St George’s Road. She focuses on painting views of the coast and capturing happy days at the seaside in her pictures, prints, greetings cards, textiles and gifts. 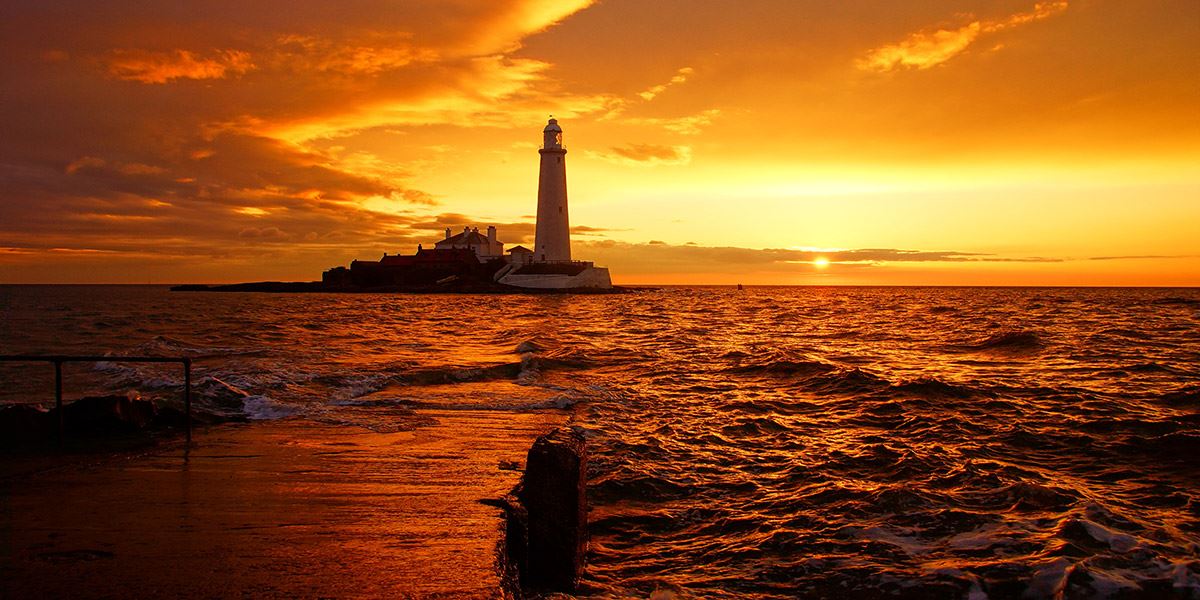 Whitley Bay’s beach runs all the way from Cullercoats to the tidal St Mary’s Island, with its distinctive lighthouse. This bustling seaside town offers the perfect day out for both families and couples with its miles of sandy beach, traditional games arcades, mini golf, award-winning ice cream parlours (try Di Meo’s and the Rendezvous Café) and fish and chips.

Whitley Bay’s beach runs all the way from Cullercoats to the tidal St Mary’s Island, with its distinctive lighthouse

The Spanish City – immortalised by Dire Straits in its 1980 hit single, Tunnel of Love – is probably Whitley Bay’s most famous beachside landmark. Once home to a theme park and ballroom, the Spanish City had lain empty and crumbling. But it’s recently been restored to its former glory and is now home to restaurants, bars, and traditional tearooms.

In the summer, you’ll find food and drink festivals and other outdoor events taking place on the Spanish City Plaza, whilst The Links running up to St Mary’s Island, plays host to an annual classic car show. The cinema is always a good bet if the weather decides to do its worst. Jam Jar on Park Avenue in the town centre is an intimate community cinema showing a mix of independent, British and Hollywood releases.

From there is it just a short walk to Park View, a long high street packed with a diverse mix of independent shops and eateries, such as Hound Dog Music with its range of stringed instruments; Whitley Bay Skate Club, stocking vintage, retro, modern and collectible skate related boards, equipment and clothes; and Escape Boutique, a treasure trove of beautiful womenswear and accessories. You’ll also find wide-ranging food and drink outlets from Papa Ganoush with its Middle Eastern-inspired menu, to the Pure Knead artisan bakery selling bespoke breads and cakes, and The Dog and Rabbit Microbrew pub – the Tyneside pub of the year 2019 – which has eschewed juke boxes, gaming machines and TVs in favour of fine ales served in convivial and homely surroundings. 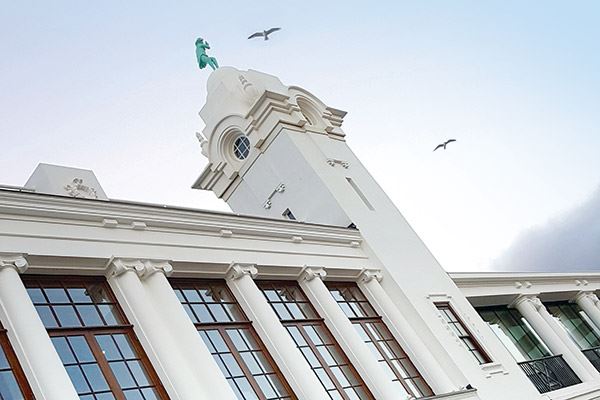 The Spanish City was immortalised by Dire Straits in its 1980 hit single, Tunnel of Love 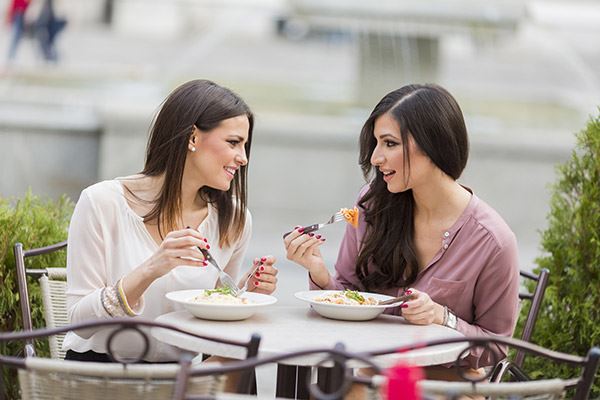 Dine alfresco at a number of coastal eateries

There are plenty of other top-notch food options in Whitley Bay. Hinnies (a North East term of endearment) on East Parade on the seafront, serves rustic and earthy Geordie-influenced comfort food, whilst Elder and Wolf on Whitley Road specialises in real wood-fired pizzas, hand-made tacos, kebabs and craft beers. Simpsons Bistro on Claremont Crescent dishes up a mix of traditional British cafe favourites and Indonesian street food. Meanwhile, Shikara on Whitley Road, is the place to head for award-winning Indian food.

If you are after traditional fish and chips, try family-run Fisherman’s Bay on East Parade which offers the fresh catch of the day with welcoming additions such as flame-grilled home-made gourmet burgers and gelato ice creams. With their own Metro stops, good bus routes, and plenty of seafront parking spots, there’s no excuse for not escaping the city to take in North Tyneside’s breathtakingly beautiful and dramatic coastline.