Eating out in Newcastle and Gateshead

With Newcastle hailed the top place in the UK for independent restaurant openings, the area’s diverse bar and eating out scene is booming with everything from Michelin star fine dining to cutting-edge cuisine, cherished classics, casual street food and trusted and reliable chains to choose from covering every budget, occasion and taste bud craving. Ignore those who sneeringly claim the North East has nothing good to offer on the food and drink front. It may once have been the case, when the heavy industry that brought wealth and prestige to the region demanded equally stodgy food served-up without ceremony or finesse to the legion of workers who kept the shipyards, mines, factories, furnaces, and engineering plants operating night and day. But times have moved on.

Coal, shipbuilding and iron and steel are no more, and less arduous but no less skilled occupations have taken their place. Food and drink has moved on apace too, from modern day artisans growing, rearing and making award-winning local produce, to the plethora of exciting and diverse restaurants run by some of this nation’s most innovative and audacious chefs. No longer does the cream of the North East’s culinary talent feel compelled to head for the bright lights of London to make their name. Instead, they are increasingly choosing to showcase their gastronomic talents on their home patch, often in very untraditional ways. Together, it makes for what is undoubtedly one of the most adventurous, appetising (in all senses of the word), accessible and ever-evolving dining out scenes you’ll find anywhere in the UK. While other parts of the country have been beset with restaurant closures (especially from among the big chains), in contrast Newcastle-Gateshead’s hospitality sector is thriving. And it is the independents who are leading the way, with new, collaborative dining hubs driving a more laid-back and eclectic approach to eating out.

By the River Brew Co and the Stack have both opened their doors in prime Newcastle-Gateshead locations in 2018, offering locals and visitors alike two very different but unique food and drink experiences from inside purpose built shipping container villages. Indeed, the Stack on Newcastle’s Pilgrim Street on the site of what was an old cinema, is the biggest scheme of its kind outside London, with its 60 containers hosting a mix of independent boutique shops, eateries and bars. Here you will find everything from vegan to Chinese, Texan, Mexican, Japanese, Korean, Lebanese and Italian cuisines alongside good old-fashioned British fish and chips, home-made burgers, steaks, not so humble sandwiches, and coffee, beer, wine and gin bars all within sight of Newcastle’s main shopping area.

By the River Brew Co sits next to the iconic Tyne Bridge in Gateshead. Among the container community’s attractions are a micro-brewery, tap room, restaurant, custom build bike and coffee shop, and a weekend hawkers’ market, which is home to around a dozen street food specialists – both permanent and pop-up – including North East favourites Scream for Pizza, Middle Eastern devotees, Papa Ganoush, and Indian connoisseurs, Dabbawal.

Ready-to-eat street food has been a popular concept in Newcastle-Gateshead for a long time, however. The glass covered Grainger Market in Newcastle opened in 1835, and has a well-established street food area where you will find all manner of world cuisines to eat on the go from sweet French crepes to gourmet hand-made cakes, delectable Chinese dumplings, American cheeseburgers, hot dogs, and fresh pizza by the slice. It’s the vibrancy of Newcastle-Gateshead’s dining out scene that in 2011 led to the city’s NE1 business improvement district launching a dedicated restaurant week.

Both Newcastle and Gateshead offer an abundance of coffee shops

Held in the NE1 postcode area, Newcastle Restaurant Week was the first event of its kind in the UK, and its success has now spawned similar dining out festivals in other cities. Initially held just in the January – a traditionally quiet time for restaurants – it has now become a biannual event, with the addition of another week-long dining out celebration every August. More than 100 restaurants from the smallest independents to the big chains take part, showcasing their best menus at just £10 or £15 per person. Around 50,000 people take up the offer to sit down to the freshest, seasonal and, in many cases, locally-sourced food for a fraction of the usual cost. So well-known have the weeks become, that visitors now consciously make a beeline for Newcastle in January and August to dine their way around the city.

But you don’t have to wait until restaurant week to discover tastily priced dining treats. Newcastle’s Grey Street and Quayside areas are especially rich in lively, welcoming, satisfying and competitively-priced independent restaurants, bars and cafes, like the Bridge Tavern gastropub and Dobson and Parnell – where the talented Troy Terrington works his magic with a refined, mainly British and European menu – both of which are tucked under the Tyne Bridge on the north side of the river.

Sunderland food and drink festivals for 2019

Two new food and drink festivals have been announced for Sunderland for 2019 and here's our insider scoop! Read feature >

Enjoy a serving of special offers from top restaurants across the city in Newcastle's Restaurant Week. Read feature > 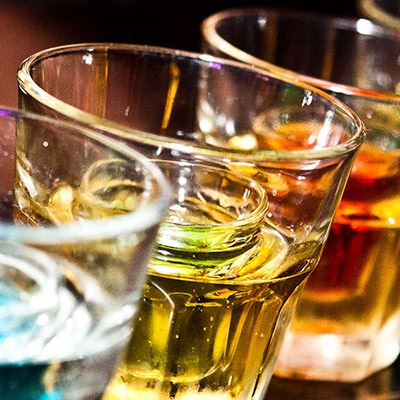 Famous the world over as a party city, Newcastle and Gateshead are home to a myriad pubs, clubs and bars. Read feature >

Then there’s Six at BALTIC on the Gateshead side of the Tyne which provides unrivalled views along the Quayside as well as modern British-inspired cooking using seasonal, local ingredients. The Quayside area also boasts some of the best Italian eateries on Tyneside in Sabatini’s, Gusto and Babucho, while River Beat in what was an old police station in Gateshead, has thrown off the notion that tapas only comes from Spain with its small Asian savoury dishes and colourful, tasty but mainly unfamiliar curries.

It is on the Quayside that you will also find Tyneside’s only Michelin-starred restaurant, House of Tides, where well-known chef Kenny Atkinson – a stalwart of the BBC’s Saturday Morning Kitchen and a two time Great British Menu winner – holds court. The restaurant is located in one of the few historic townhouses to survive the great fire which devastated both the Gateshead and Newcastle riversides in 1854. Here Newcastle-born Kenny – whose bold and ambitious cooking has won him a host of prestigious awards, including the Catey Chef of the Year – serves an ever evolving tasting menu showcasing the very best seasonal North East and British produce.

Bisecting Grey Street is High Bridge, on whose cobbled length you will find multi-award winning Indian street food kitchen Dabbawal, as well as the hip bar-restaurant, Pleased to Meet You, which specialises in craft beers, gin, and British comfort food served with a theatrical twist. Newcastle is one of only five cities in the UK to boast its own Chinatown, which lies on Stowell Street on the edge of the city’s main shopping area. You enter through an ornate 11m high arch flanked by two guardian lions. Here you will find the majority of Tyneside’s Chinese restaurants and supermarkets, like the popular Chinatown Express and the award-winning King Neptune. There are other good Chinese restaurants across Tyneside, of course, like The Imperial Restaurant in Low Fell, Gateshead.

Not to be missed is the Fenwick department store’s Food Hall with its dining counters and delicatessen packed with moreish cheeses, charcuterie, pies, quiches, hams, and locally-produced ready meals and salad boxes from the likes of vegan, vegetarian and gluten-free champion, Wheatberry, and Sachins, whose critically acclaimed Punjabi restaurant on Newcastle’s Forth Bank has been satisfying Tynesiders’ curry loving tastebuds for more than three decades. Another must-visit is Wylam Brewery’s Palace of the Arts in Newcastle’s Exhibition Park, a 30 barrel microbrewery and tap room and kitchen open Thursday-Sunday serving small plates of traditional British food with a North East twist. The menu changes weekly but could include small dishes of smoked ham hock with a fried duck’s egg, crispy lamb belly or asparagus and white crab meat. The now legendary Sunday roast dinners usually offer three meat options as well as a vegetarian dish and a choice of hearty British desserts.

Popular chain restaurants are also part of Newcastle-Gateshead’s culinary mix. All the popular names are here, from Pizza Express to Nando’s, Wagamama, McDonald’s, TGI Fridays and Zizzi. The Grey’s Quarter in the intu Eldon Square shopping centre in the heart of Newcastle is home to some 20 mainly chain restaurants, including George’s Great British Kitchen and Ask Italian. Across the river, The Qube dining and leisure area in the intu Metrocentre shopping mall offers day-long dining from a quick bite to a three-course meal with the cult American burger bar Five Guys, YO! Sushi and Frankie and Benny’s among the food names.

Just a few minutes’ drive from the centre of Newcastle in the suburb of Jesmond stands the acclaimed Peace and Loaf restaurant, run by Masterchef: The Professionals finalist Dave Coulson, who in 2018 also represented the North East on the BBC’s Great British Menu. The two AA rosette and Michelin-recommended venue offers fine dining without the fuss with an array of stylish, flavour-packed dishes showcasing both Dave’s culinary talents as well as whatever fresh, mainly local ingredients he can lay his hands on. Seasonality is very much to the fore with the menus changing regularly. The 10-course tasting menu is great value at £80 per person, and offers a tantalising excerpt of Dave’s diverse cooking styles. Past menus have featured such unusual delights as pigeon, plum, elder, lychee and sweet and sour; smoked haddock, black pudding, egg and cheese pastry; and duck, watermelon, eel, carrot, feta, and fennel pollen.

Tynemouth stands at the mouth of the River Tyne 12-miles downstream from the centre of Newcastle. It is home to Riley’s Fish Shack, a semi-portable fish bar and grill based in a converted shipping container overlooking the picturesque King Edward’s Bay. Serving local, seasonal fish and seafood, it is a laid back ‘take us as you find us’ kind of place. No reservations are taken, the menu is small, and seating limited. But its charm and the high quality of the food – the signature mackerel wrap is sublime, as are the wood fired pizzas – has won this place a legion of fans, including two Michelin star chef Michel Roux Jnr who featured it on his Hidden Restaurants TV show, and food critic Jay Rayner, who described this humble shack as the “eating experience of the year”. Praise indeed from a man better known for his acerbic tongue than his culinary niceties.

The best things to do in Newcastle-Gateshead

The best shopping in Newcastle-Gateshead

The best nightlife in Newcastle-Gateshead

Your guide to arts and culture in Newcastle-Gateshead