History and heritage of Bristol

The rich and eventful history of Bristol as a port stretches back over many centuries.

The original town was listed in the Anglo-Saxon Chronicle of 1051 as a port trading regularly with Ireland. Bristol played an extremely important role in sea trade for hundreds of years following this, but as the scale of business and trade grew in the city, so did the need to develop the narrow and relatively small harbour.

The geography of the land and the huge tidal range of the Avon had always caused problems for ships docking in Bristol. As the water in the river ebbed back towards the sea, the ships anchored in the harbour would rest on the river bed and be subject to immense pressure from the weight on-board, often causing considerable damage to the timbers. As a result, Bristol-built ships were constructed using the finest materials and most skilled techniques, and quickly became famous for their sturdy craftsmanship. Sailors visiting the port would comment on this, spawning the famous saying ‘shipshape and Bristol fashion’.

Isambard Kingdom Brunel was one of Bristol’s most famous sons, and his feats of engineering soon stretched to the city’s waterways. It was Brunel who played a major role in the cutting-edge design and construction of the floating harbour, which is still in use today. This new lock system trapped water in the city’s central harbour and allowed ships and boats to stay afloat without being affected by the changing tides. Brunel’s Great Western steamship was built in the city harbour and launched in 1837. It was on this launch that she became the first of Brunel’s passenger ships to travel between England and New York. 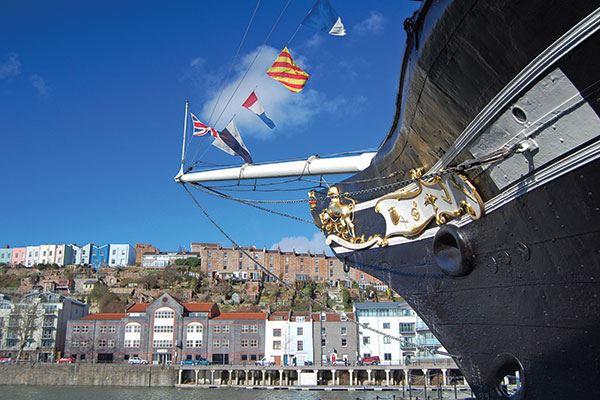 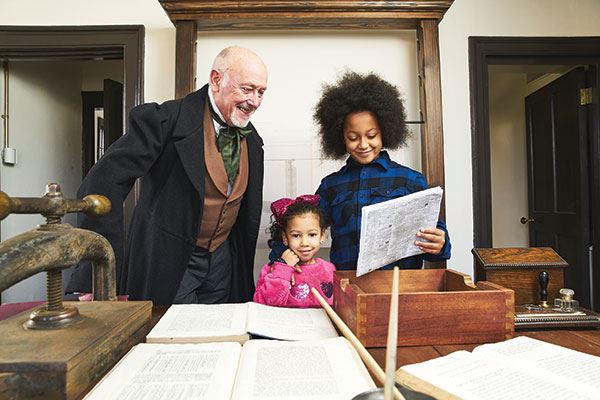 Another of Brunel’s famous steamships was the majestic SS Great Britain, the first iron-hulled, propeller-driven ship to cross the Atlantic. Built in Bristol and launched in 1843, this magnificent ship made voyages to New York and Australia and was used as a freight and cargo ship during the Crimean war.

After being abandoned in the Falkland Islands, she became a store ship and was left severely damaged by the effects of the weather and the crashing waves. She was eventually rescued and brought back to Bristol in 1970, where she was restored and transformed back into her original state as a 19th-century passenger ship. The SS Great Britain now rests in the original dry dock in which she was built, and is open to the public as one of Bristol’s major visitor attractions.

Built in Bristol and launched in 1843, this magnificent ship made voyages to New York and Australia and was used as a freight and cargo ship during the Crimean war

Walking along Bristol’s ancient harbour, it’s easy to imagine the tall ships with their sails whipping in the wind and the shouts and cries of sailors preparing to head out to sea. Bristol’s strong links with the ocean, and its key role in the trades of slavery and tobacco, inevitably led to the city’s involvement with piracy. Laws at the time stated that piracy was illegal – however the practice of privateering was not. Privateers were meant to have a ‘letter of Marque’ from their government allowing them to attack and steal from merchant ships of certain countries.

Bristol’s most famous pirate, Blackbeard, was allegedly born in the city near the old harbour. Also known as Edward Teach, the infamous sailor led a reign of terror across the Caribbean Sea and the islands that inhabit it. Another pirate with Bristolian links was Bartholomew Roberts, who roamed the seas in the 18th century. He sailed from Bristol on merchant ships and was forced to join a band of pirates after his own ship was captured. He soon earned respect on-board and eventually became captain of the ship, and went on to become the most successful pirate in history, capturing 456 vessels in four years. He was killed in a battle against HMS Swallow, which had been specially commissioned to capture pirates. He was granted his dying wish to be buried at sea so his body would never be captured.

Bristol also played a great role in the demise of piracy. Governor Woodes Rogers, a famous privateer, was born in Bristol in 1679. He circumnavigated the globe between 1708 and 1711, and is most famous for rescuing Alexander Selkirk from Juan Fernandez Island, where he had been marooned for over five years. Rogers was later made General and Governor in Chief of the Bahama Islands, where he took steps to suppress piracy, successfully ousting Blackbeard as Magistrate of the “Privateers Republic”. A plaque commemorating Woodes Rogers can be seen on one of the fine Georgian houses in Queen Square. 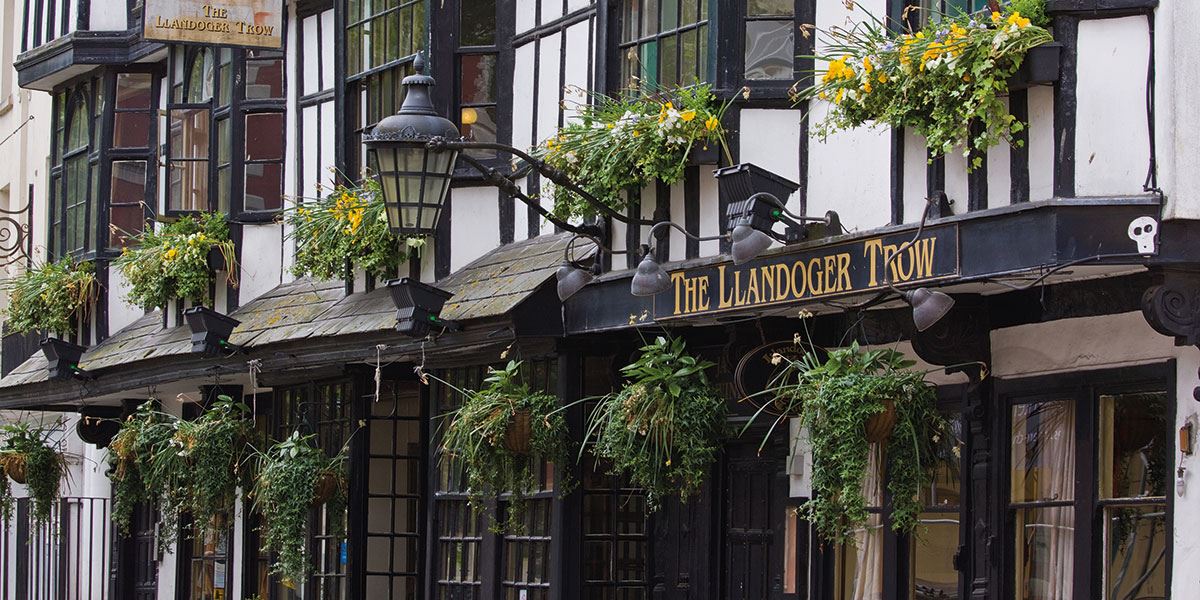 The story goes that after Alexander Selkirk was rescued by Rogers’ crew and taken back to Bristol, he met the author Daniel Defoe in The Llandoger Trow, a salty old pub on Bristol’s King Street which still stands today and is well worth a visit. Selkirk later became the inspiration for Defoe’s character, Robinson Crusoe, in the famous book of the same name. The character Ben Gunn in Robert Louis Stevenson’s ‘Treasure Island’ was also based on Selkirk. Stevenson is said to have visited the Hole in the Wall pub just off Queen Square in Bristol, which bears a striking resemblance to the Spyglass Tavern in Treasure Island.

Many of the buildings in Bristol are closely linked with both pirating and privateering. Queen Square, near the harbour, remains much as it was hundreds of years ago, and many of the city’s leading businesses have offices there. The Customs House in Queen Square is where the taxes and duties were collected from the ships that came into the city’s harbour. Much of the wealth and prosperity brought into this area came from pirating, and many of the buildings around the harbour are said to have been funded by this maritime crime.

As to the future, Bristol has proved itself to be the UK’s most sustainable city and, despite its hilly nature, cycling is more popular than ever. Being able to demonstrate a rapid progress across a wide range of quality of life, environmental and a move towards businesses becoming more environmentally-friendly bagged Bristol the title of European Green Capital.

Getting to and around Bristol