The top places in the UK for afternoon tea

Enjoying a spot of afternoon tea is a British tradition that has most certainly stood the test of time and if anything, has enjoyed a resurgence in popularity over the past few years with more and more venues putting their own twist on the historic past time.

While a pot of piping hot tea is still top of the menu in some places, others serve up prosecco, gin and cocktails to help a bevvy of sweet and savoury treats go down well. Read on to discover some fantastic places for afternoon tea across the UK.

The 5 star Culloden Estate & Spa in Belfast stands on the forested slopes of the Holywood Hills, overlooking Belfast Lough and the glorious County Antrim coastline, offering idyllic surrounds for an Autumn break. Deemed ‘The Ritz of Northern Ireland’, the Culloden is a grand estate originally built as a Palace for the Bishops of Down. Guests can explore the glorious, autumnal colours of Northern Ireland with nature at their doorstep, whilst admiring the maples at Mount Stewart, which is located just minutes from the Culloden Estate & Spa.

Seaham Hall offers a sumptuous Champagne Duchess of Bedford Afternoon Tea, which is rather special and includes hand-made finger sandwiches; smoked salmon and cream cheese, egg and cress, honey roast ham and mustard and cucumber and sour cream. House-made fruit and plain scones are served with house-made strawberry jam and Devonshire clotted cream. Plus, there’s a selection of desserts, cakes and pastries from the hotel’s pastry chef and all is served with free-flowing teas and coffees of your choice. Afternoon tea can be enjoyed in the hotel’s cosy lounge, or on the outdoor terraces overlooking the beautiful grounds and gardens. 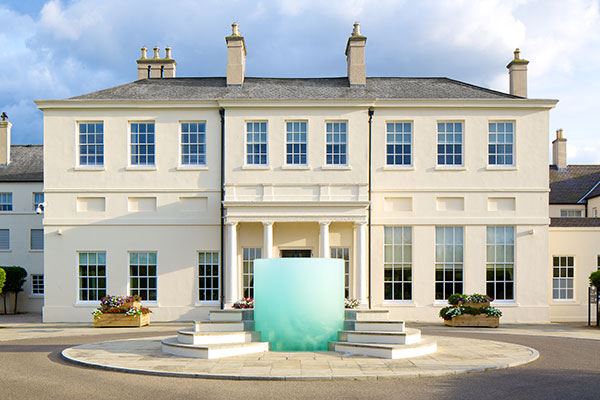 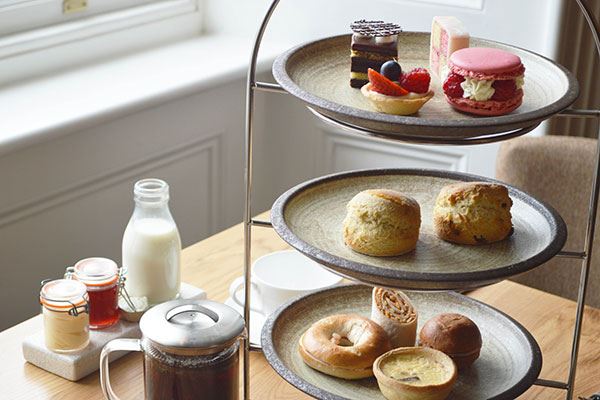 The hotel also serves a very popular Gentleman’s Afternoon Tea – a far cry from dainty cakes and finely-cut cucumber sandwiches, The Gentleman’s Afternoon Tea at The Chester Grosvenor is a hearty affair for the discerning man-about-town. Crusty doorstep sandwiches – filled with beef and horseradish, chicken or egg mayonnaise – chunky chips and local Appleby Cheshire cheese will quell the manliest of appetites, as will the filling fruit cake, rich brownie and pot of tea. Intersperse tea-sipping with games of backgammon and newspaper-reading.

K West Hotel is swapping floral tea plates and saucers for turntables with their Glam Rock Afternoon Tea. Experience the ultimate rock ’n’ roll afternoon tea with a range of treats and delights served on a retro turntable in the heart of West London.

This unique spin on traditional afternoon tea serves up an eccentric menu including the Marc Bolan-inspired Tea Rex, Bob Marley Born to Rum Cocktail and a selection of loose leaf teas and herbal infusions. Guests can also indulge in a selection of savouries such as the beetroot gin-cured salmon with blue cheese and grapes on rye bread.

The Glam Rock Afternoon Tea is available Monday to Sunday from 2pm-5pm in the Studio Bar and Kitchen.

K West Hotel & Spa’s fun and vibrant ambience is fused with ultimate relaxation in a prime location. Situated in Shepherd’s Bush, the hotel is on the doorstep of Westfield shopping centre, the largest urban retail destination in Europe with over 240 outlets. Fashionable areas such as Notting Hill, Portobello Road and Kensington are also just a short walk away. 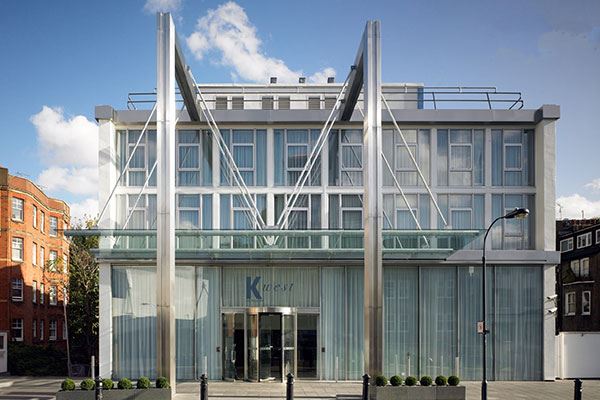 The K West Hotel is located in West London 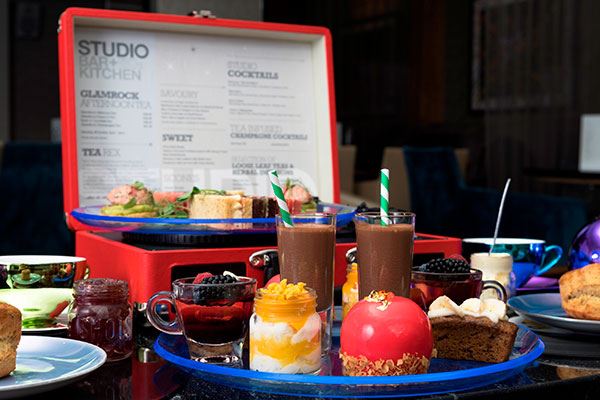 Try out an alternative afternoon tea at the K West Hotel

There’s nowhere quite like The Grand when it comes to afternoon tea. Presented on a silver stand, there’s an elaborate tower of savoury and sweet treats is a feast for the eyes as well as the tastebuds.

Take in stunning views of the city walls in The Rise Restaurant as you indulge in one of the best afternoon tea in York, with optional prosecco, champagne and gin and tonic upgrades, perfect for special occasions.

Served every day on the beautiful garden terrace, in the award-winning orangery, or by the fire in winter, afternoon tea at the elegant clifftop hotel, the Alexandra, is an indulgent affair. A traditional Dorset Cream Tea is made extra special with home-made scones, locally-produced jam and Devonshire clotted cream, whilst the sumptuous Alexandra Champagne Tea provides an added level of luxury. The historic hotel setting, with sea views across glittering Lyme Bay, provides the perfect backdrop, making it easy to see why the Alexandra issaid by many to be one of the most beautiful hotels on the British coast. 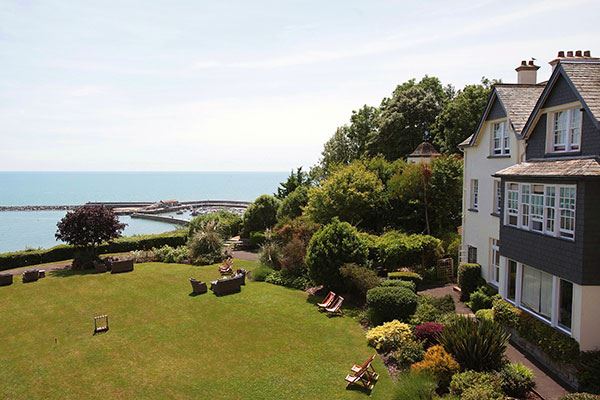 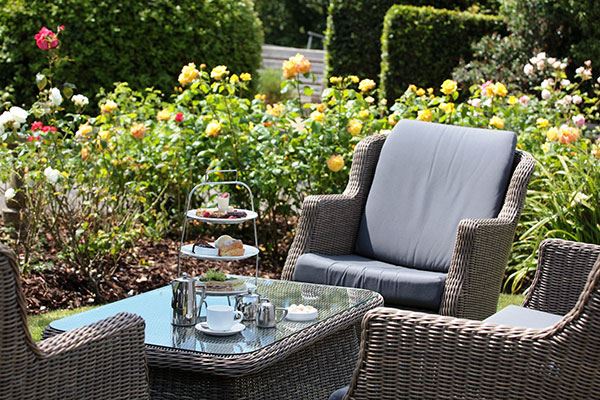 Sample an alfresco afternoon tea at the Alexandra Hotel & Restaurant

Ballygally Castle is beautifully located on the scenic Antrim coast facing the soft, sandy beaches of Ballygally Bay and only 26 miles from Belfast. The castle dates back to 1625 and is unique in that it is the only 17th-century building still used as a residence in Northern Ireland today. The hotel, with 54 rooms is reputedly haunted by a friendly ghost and brave guests can visit the ‘ghost room’ in one of the towers to see for themselves. It underwent an extensive £3m refurbishment in 2014. 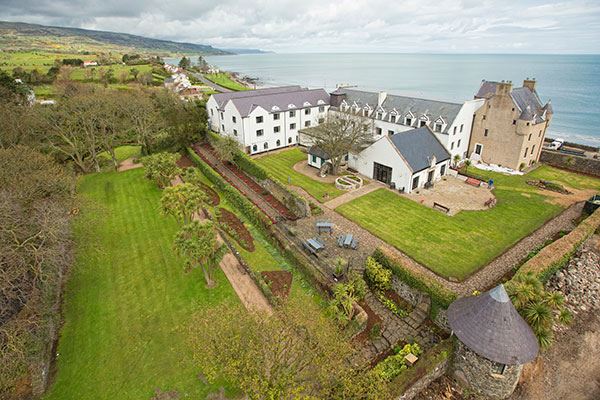 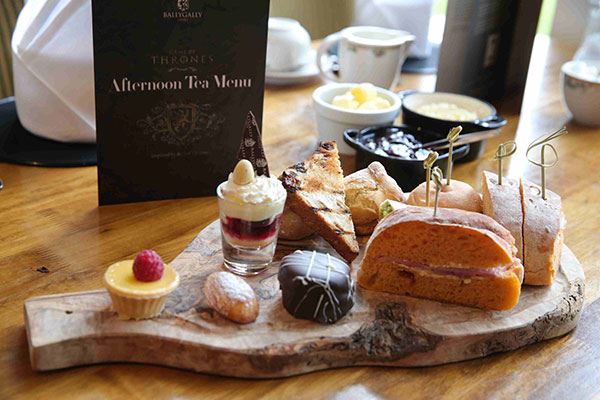 Have afternoon tea at the fabulous Ballygally Castle Hotel

The Greenway Hotel and Spa, Cheltenham

The Greenway Hotel and Spa is a 16th-century Elizabethan manor on the outskirts of Cheltenham. The hotel has eight acres of picturesque gardens which include a croquet lawn, sunken garden and ornate lily pond. Enjoy a Traditional Afternoon Tea in peaceful surroundings including a choice of loose leaf tea, selection of finger sandwiches, scones clotted cream and jam accompanied with a selection of home-made cakes.

7 of the best tea rooms in the UK and Ireland