British produce in Newcastle and Gateshead

The folk in Newcastle and Gateshead are proud of their culinary heritage, and of the fantastic local produce that’s available around these parts. Whether you’re dining out in Michelin-starred splendour or eating fish and chips on the beach, you’ll be bowled over by the quality on offer.

Restaurants and cafés in Newcastle and Gateshead

Newcastle’s Grey Street and Quayside areas are full of fabulous restaurants, bars and cafés. Both The Bridge Tavern and Dobson & Parnell are tucked under the Tyne Bridge on the north side of the river and offer casual fine dining with refined, mainly British menus.

On the Gateshead side of the Tyne, Six at BALTIC provides unrivalled views along the Quayside as well as modern British-inspired cooking using seasonal, local ingredients. Nearby Route is an elegant eatery specialising in simple, seasonal British food. 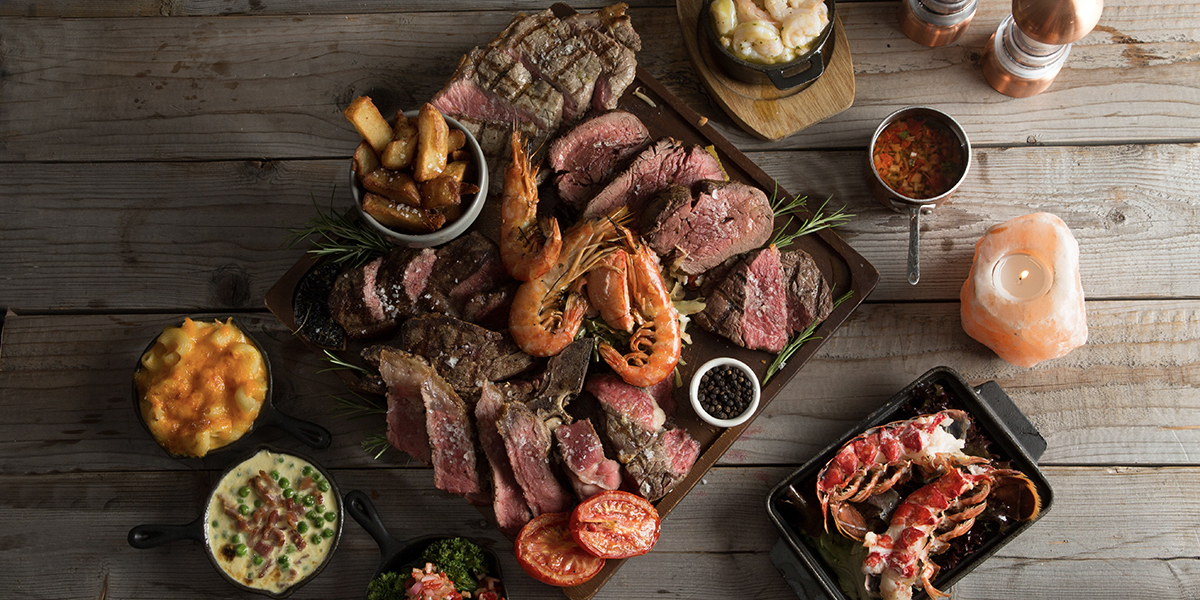 If you’re a steak lover, then why not tempt your tastebuds at one of the North East’s fastest-growing restaurant chains? Tomahawk Steakhouse is a specialist steak restaurant and bar, serving the finest Himalayan salt dry-aged steaks, wagyu and other locally produced meat, fish and vegetarian dishes.

Also on the Quayside is Tyneside’s only Michelin-starred restaurant, House of Tides, where well-known chef Kenny Atkinson – a stalwart of the BBC’s Saturday Morning Kitchen and a twice Great British Menu winner – holds court. The restaurant is located in one of the few historic townhouses to survive the great fire which devastated both the Gateshead and Newcastle riversides in 1854. It serves an evolving tasting menu showcasing the very best, seasonal produce from the North East. 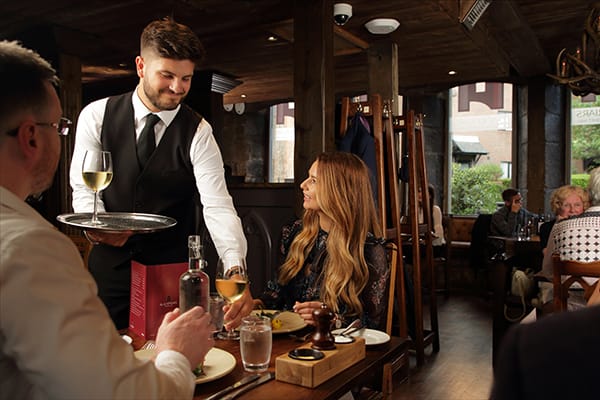 Expect service with a smile at Blackfriars Restaurant 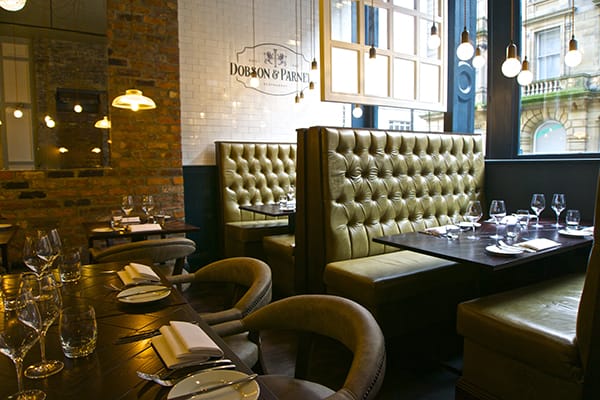 Dine in a comfortable environment at Dobson and Parnell

One of Newcastle’s historic gems is Blackfriars Restaurant, believed to be the oldest dining room in the UK having formerly served as the refectory for the Black Friars of Newcastle from the 13th century. Today it serves a local, seasonal and rustic menu which has earned it the Taste of the North East Gold award. It was recently voted Time Out’s top restaurant in Newcastle.

Blackfriars Restaurant serves a local, seasonal and rustic menu which has earned it the Taste of the North East Gold award

Bisecting Grey Street is High Bridge, on whose cobbled length you’ll find hip bar-restaurant, Pleased to Meet You, which specialises in craft beers, gin, and British comfort food served with a theatrical twist. High Bridge is also home to Hibou Blanc – which is definitely somewhere to see and be seen and has won rave reviews for its menu.

Not to be missed is the Fenwick Food Hall with its dining counters and delicatessen packed with moreish cheeses, charcuterie, pies and locally produced ready meals and salad boxes. The Food Hall is also home to superb restaurants, notably Saltwater Fish Company – superb fresh fish cooked to order in front of you – and PorterHouse Butcher and Grill. Fenwick’s Roof Thirty Nine is a stylish new dining space sitting high above the city where you can sample everything from breakfast to cocktails and dinner.

Another must-visit is Wylam Brewery’s Palace of Arts in Newcastle’s Exhibition Park, a 30-barrel microbrewery, taproom and kitchen serving small plates of traditional British food with a local twist. 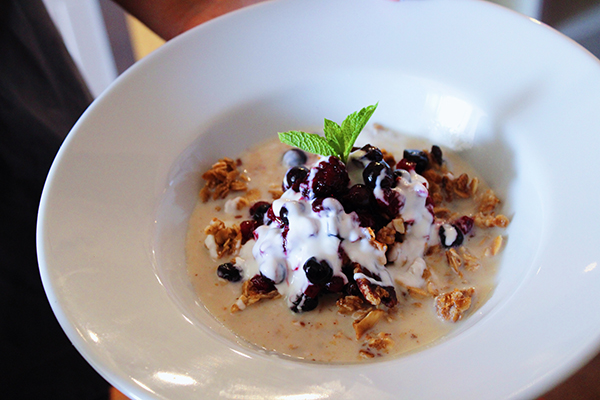 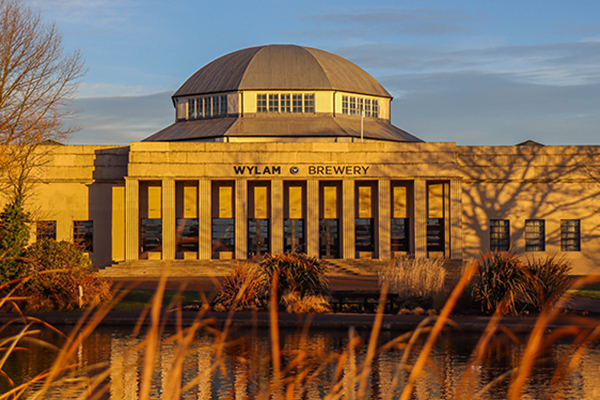 Great beer and great food, what a combo from Wylam Brewery!

Just a few minutes’ drive from the centre of Newcastle in the suburb of Jesmond stands the acclaimed Peace and Loaf restaurant, run by Masterchef: The Professionals finalist Dave Coulson. The two AA rosette venue offers fine dining without the fuss with an array of stylish, flavour-packed dishes made with fresh, mainly local ingredients. Seasonality is as the forefront of this restaurant’s ethos and the menus change regularly.

Also in Jesmond is the multi-award-winning Branches, famous for its stunning decor and contemporary elegant dining experience. A recent addition to Jesmond’s food scene is Kennedy and Rhind. At this artisan bakery and café, you can expect goodies such as fishcakes, croque monsieur, baked French toast, and an assortment of baked goods, from croissants to Portuguese custard tarts.

If you’re looking for meat-free treats, Little Green on Goldspink Lane is a family-run vegan café, bistro and health food shop that does everything from breakfast to a lunchtime tapas menu and evening sharing platters.

More veggie treats are on offer alongside excellent coffee and drinks at Super Natural Café on Newcastle’s Grainger Street. Then there’s nearby Vegano, which offers a range of vegan burgers, kebabs, mini pizzas and pasta. The Ship Inn in Ouseburn is a pub first and foremost, but alongside a good range of beers, it also has a fully vegan food menu. Lastly, the Karma Kitchen Café in Bigg Market is the place to go for Indian-inspired vegan goodies.

Tynemouth stands at the mouth of the River Tyne 12 miles downstream from the centre of Newcastle. It’s home to Riley’s Fish Shack, a semi-portable fish bar and grill based in a converted shipping container overlooking the picturesque King Edward’s Bay. 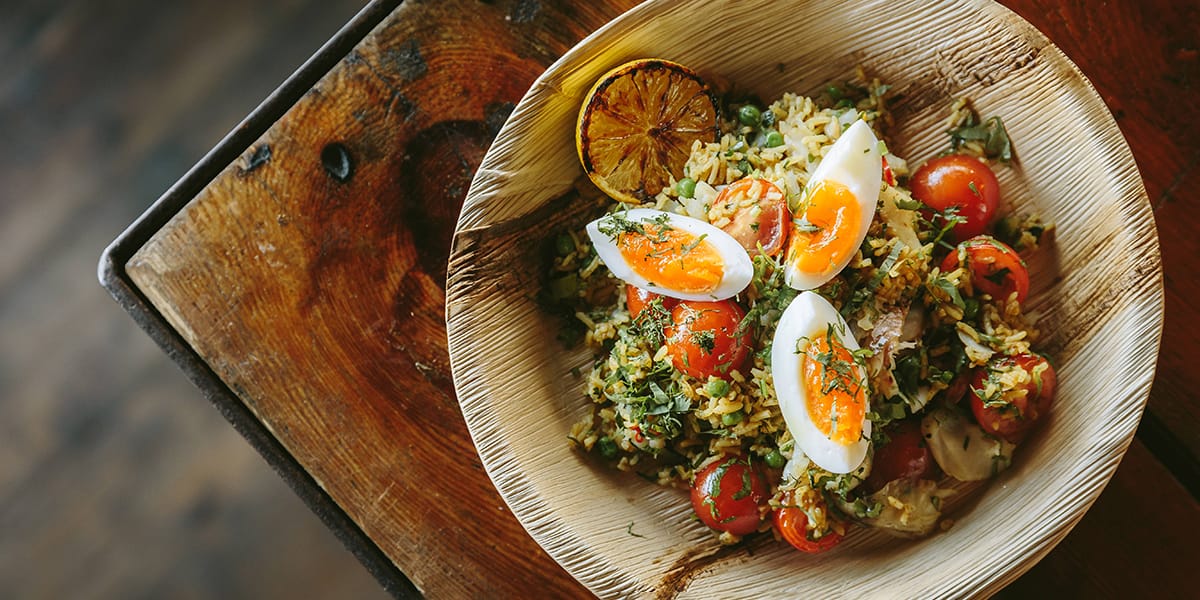 Serving local, seasonal fish and seafood, it’s a laid back ‘take us as you find us’ kind of place and the high-quality food has won this place a legion of fans. They include two Michelin-starred chef Michel Roux Jnr who featured it on his Hidden Restaurants TV show, and food critic Jay Rayner, who described this humble shack as the “eating experience of the year”.

In 2011 the vibrancy of Newcastle and Gateshead’s dining scene led to the launch of a dedicated restaurant week. Held in the NE1 postcode area, Newcastle Restaurant Week takes place twice a year, in January and August, and showcases more than 100 fantastic restaurants from the smallest independents to the big chains.

Galleries and museums in Newcastle and Gateshead

High street shopping and shopping malls in Newcastle and Gateshead

The best clubs in Newcastle

High street shopping and shopping malls in Newcastle and Gateshead

Galleries and museums in Newcastle and Gateshead