Getting around Hampshire and the Isle of Wight

Travel around Hampshire and the Isle of Wight with ease with a number of different options.

It is easy to plan your journey by bus, coach or train using Traveline or Hampshire’s local public transport guide – My Journey. Most bus, train and transport guides are available from libraries, tourist information centres and bus and rail stations. Alternatively, local Tourist Information Centres can also advise on local transport and provide timetables.

If you are feeling energetic, cycling is a great way to see Hampshire. There are more than 30 different cycling routes across the county and a range of trails for beginners and enthusiasts. A number of cycle trails are off road and offer flat, easy-going cycling. The Meon Valley, Test Way and Hayling Billy trail are all on disused railway lines so are great for beginners and families.

For longer distance routes, try the South Downs Way National Trail, which runs between Winchester and Eastbourne or the Shipwrights Way, which links villages and towns in East Hampshire. If you’ve left your bike at home, there are lots of places across the county where you can hire a bike. For a unique experience, hire an electric bike in the South Downs National Park and enjoy gentle assistance up hills. 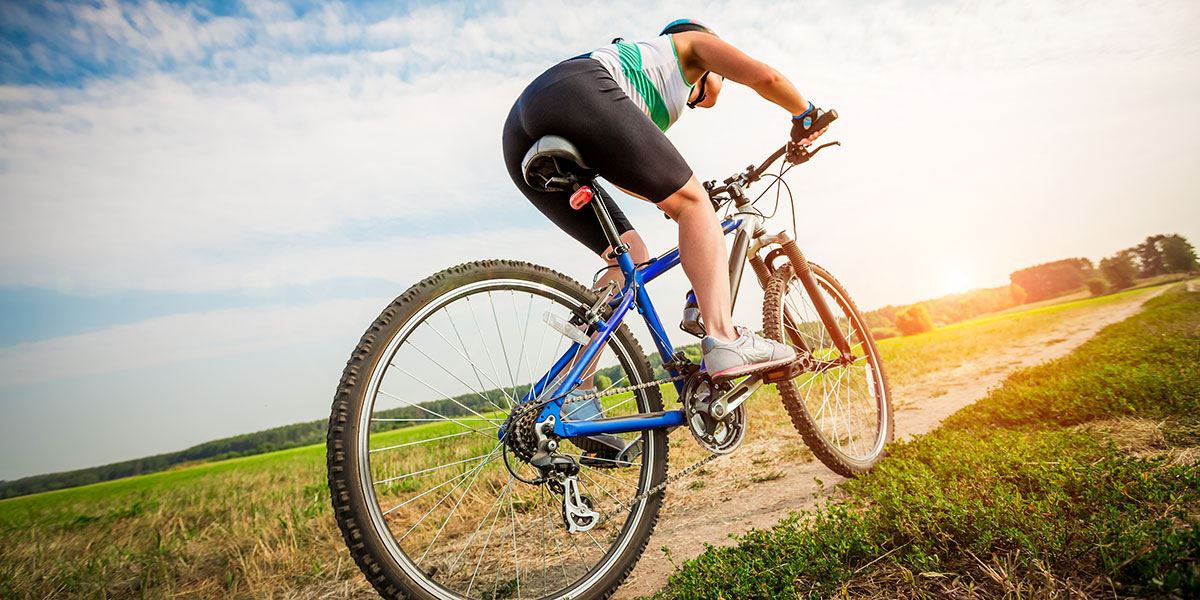 Cycling is a great way to see Hampshire: Andrey Armyagov

The main bus services within Hampshire are operated by Stagecoach, First Group and Blue Star. Avoid city centre congestion and take the Park and Ride services which operate in Winchester, Portsmouth and Basingstoke. In summer, there are extra bus routes to popular attractions, towns and villages.

Discover the hidden gems of the New Forest in summer on the Beach Bus. Hop on and off at villages, attractions and forest walks, or just sit and enjoy the view. The bus stops at popular attractions such as Lepe Country Park, Exbury Gardens, the National Motor Museum at Beaulieu and Buckler’s Hard.

Hop on and off the New Forest Tour open-top bus at villages, attractions and forest walks between late June and mid September. There are three connecting routes which cover the whole of the National Park. Enjoy on-board commentaries about the people, places and animals of the New Forest.

The main train service in Hampshire is operated by South West Trains, which operate from Bournemouth and Poole in Dorset through to London Waterloo. Most major towns in the county are served by rail, with regular services and good connections. Travel in Hampshire on a nostalgic steam train between Alresford and Alton on the Mid Hants Railway (Watercress Line). It’s the perfect way to unwind and witness the sights, sounds, smells and magic of steam travel from a bygone age. Special events run throughout the year, including a day out with Thomas, the real ale train and spectacular steam galas. 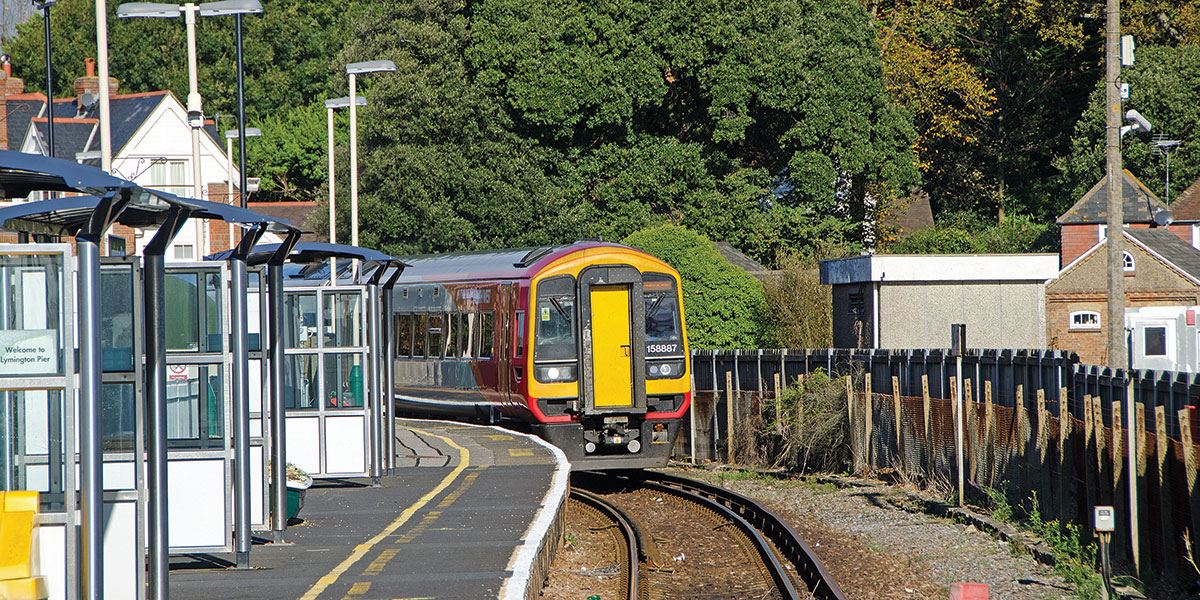 Hampshire is well served by trains

Avoid a lengthy road journey and take a ferry from one side of the water to the other. Here are some of the popular Hampshire travel services:

The original Isle of Wight ferry company, operating since 1861.

Enjoy the sights of Portsmouth Harbour and take the Gosport Ferry to Portsmouth. The ferry takes four minutes to travel and there are regular services operating throughout the year.

Take the Hythe Ferry to cross the water between Southampton and the village of Hythe. The ferry runs from the end of the pier in Hythe, which can be accessed by the Hythe Pier Railway – one of the oldest continuously operating public pier trains in the world.

Built by Henry VIII, Hurst Castle was one of a chain of coastal fortresses built in 1544. Visit the castle by ferry with regular services between Keyhaven and Hurst. In the summer months, a ferry service operates from Yarmouth on Tuesdays, Wednesdays and Thursdays.

Take a ride on the distinctive pink Hamble Ferry, ‘Emily’, which operates a regular service from Hamble to Warsash. The ferry runs from 9am to 5pm. 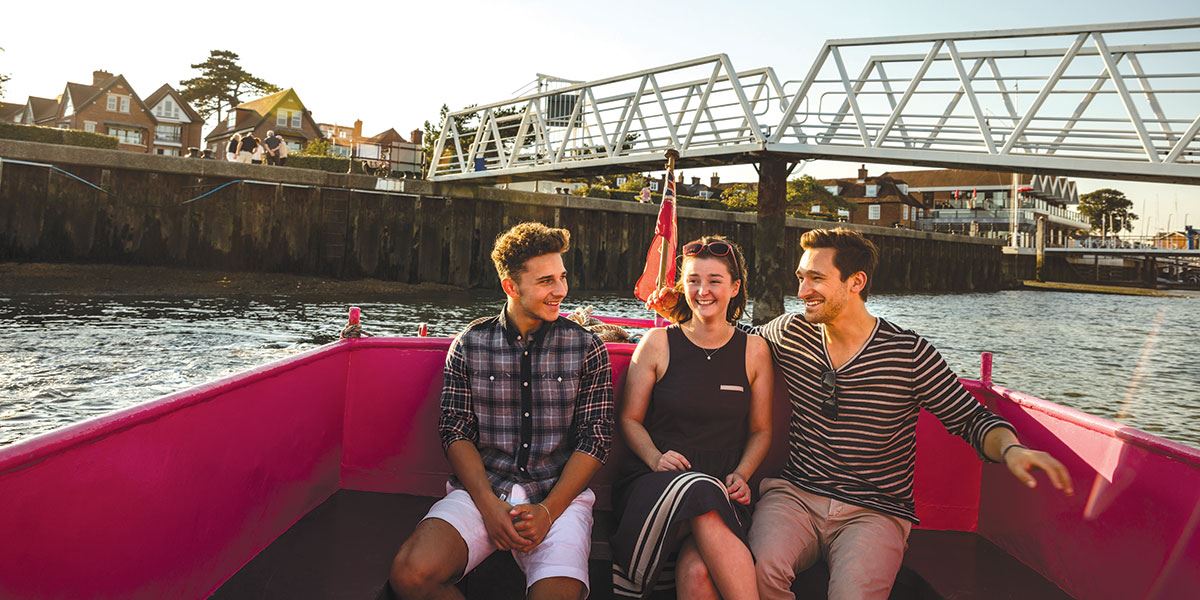 Take a ride on the Hamble Ferry

The Hayling Ferry is the most convenient way to travel between Portsmouth and Hayling Island. Visit their website for timetable information.

Hampshire has an excellent road network, with the M3 leading from Winchester to London, and the M27/A27 from Southampton across into Sussex.

Getting around the Isle of Wight

There are good transport options on the Isle of Wight. This includes good road coverage, bus and train public transport services and at only approximately 25 miles by 13 there are good travel options through cycling and walking.

Bus services on the island are provided by Southern Vectis. There are over 20 standards routes serving the majority of the island as well as having good connections to the main ferry terminals. Island Line Trains (part of South West Trains) operate a train service between Ryde Pier Head (connecting with the WightLink fastcat) and Shanklin. 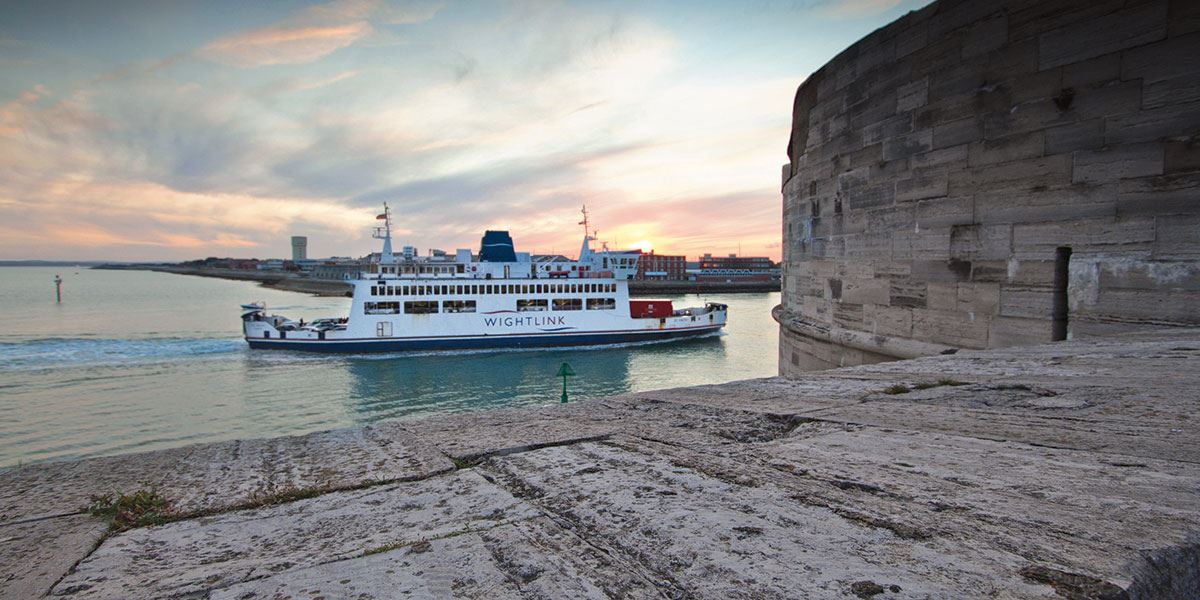 Portsmouth to Ryde is Wightlink’s quickest route for foot passengers

All major towns are connected by a network of A-roads. Typical travel times as an example from Newport, the central town on the island are:

The many quiet countryside roads on the island make it very good for cycling. As well as the roads the is a considerable network of designated cycle tracks and routes as well as miles of public bridleways for those who like off road cycling. Current established cycle routes include Cowes to Newport, Sandown to Newport, Wotton to Newport and Yarmouth to Freshwater as well as a shorter route connecting Newport to the Mountbatten Centre. There is also a well signposted ‘Round the Island’ road route which can be easily followed by those wanting to cycle right round the island.

The Isle of Wight has a wealth of footpaths and bridleways and is reputed to have more footpaths per square mile than any other English county – from a 60-mile coastal path, to easy circular routes and short town trails – there are over 500 miles of well-maintained paths on an island that measures 23 by 15 miles. The Coastal Path can be walked in four days at a leisurely pace.

The coastline is varied from white chalk cliffs to quiet estuaries. Almost half of the coastline is designated “Heritage Coast”, a definition applied only to coastlines of the highest quality and unspoilt nature. Inland, the chalk downlands are the home to many unique wild flowers and fauna, and the island has some of the most picturesque villages in the country.