History and heritage of Cambridge

Cambridge simply oozes history. From its beginnings as a trading centre to its position as a world-class university town and birthplace of the discovery of the structure of DNA, East Anglia’s famous city has plenty of stories to tell. Look around you pretty much anywhere in the city and you’ll find medieval buildings, fascinating architecture and steps that many a famous person has climbed.

According to written records, Cambridge has existed since well before the year 875, when the bridge across the River Cam (or Granta, as it was known) was recorded as being in use. It was a thriving market town around the time of the Domesday survey in 1086, and a castle stood on the tall mound – now known as Castle Hill – just to the north of the centre. Climb up to the top of the mound to get a fantastic view of the city. 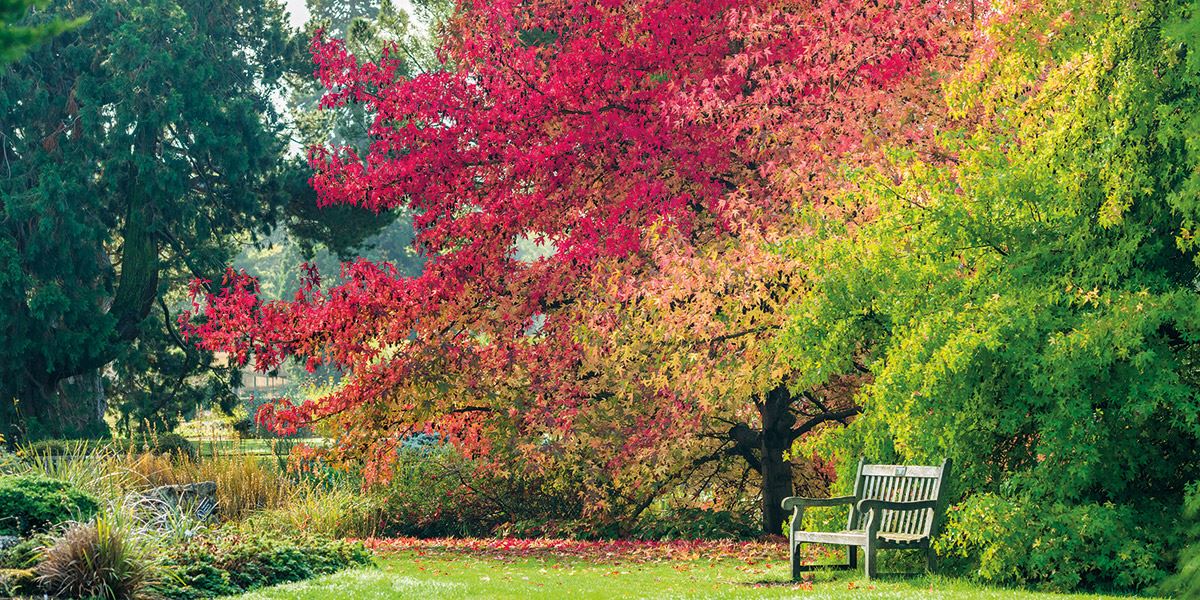 In 1209, scholars from Oxford took refuge from hostile townsfolk and settled in Cambridge, living in houses with a master in charge. By 1226, they had set up an organisation and arranged regular study courses, which were taught by their own members. King Henry III offered them protection from exploitative landlords, and ordered that only those students under the tuition of a recognised master were allowed to remain in the town.

The system soon became more authoritative and, by medieval times, the university had established many of the traditions and rules it still upholds. Lectures initially took place in private lodgings, before the university began to acquire its own property. The first university college was Peterhouse, founded in 1284, which was followed by 10 more colleges over the next 100 years. Trinity College was founded by Henry VIII from the two small houses of King’s Hall and Michaelhouse.

A notable fellow of Trinity College was Sir Isaac Newton (1643-1727), who pursued his love of science at Cambridge. A descendant of the apple tree, from which Newton is said to have discovered the theory of gravity, can be found at the Cambridge University Botanic Garden at Brookside, close to the city centre. In 1831, student Charles Darwin of Christ’s College was recommended by his professor to join HMS Beagle as the naturalist on its scientific survey of South American waters.

The first university college was Peterhouse, founded in 1284, which was followed by 10 more colleges over the next 100 years

Other notable events include the splitting of the atom, which occurred in Cambridge’s Cavendish laboratory in 1932, giving birth to the study of nuclear physics. And visitors must remember to have a pint in the pub in which Cambridge scientists Crick and Watson celebrated their success after discovering the structure of DNA, opening the door to the study of genetics (The Eagle on Bene’t Street). Opposite is the oldest building in Cambridge, St Bene’t’s Church, with its Saxon tower dating from around 1033. 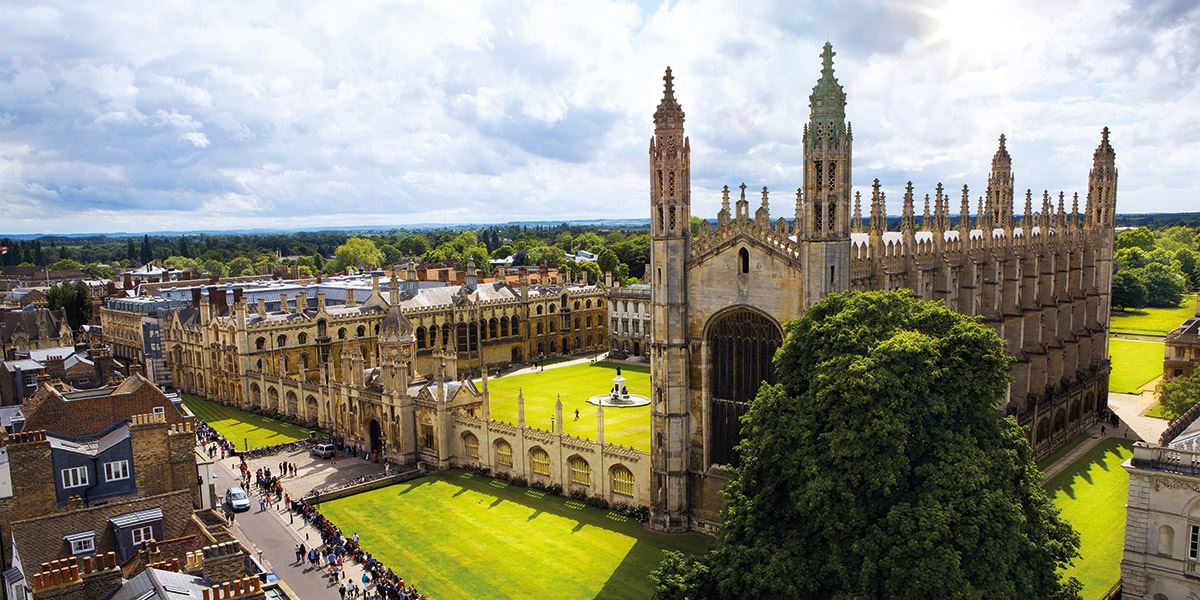 Printing was undertaken in Cambridge in the 1520s, and the University Press – one of the oldest and largest academic publishers in the world today – was formed in 1584. The building in use today is on Shaftsbury Road, and can be seen as trains pull in to Cambridge station from London.

Further afield, Huntingdon was chartered by King John in 1205, and was the birthplace of Oliver Cromwell, English military and political leader and Lord Protector of England, Scotland and Ireland. Situated on the Roman road that led from York to London, the town features a well-preserved medieval bridge that is still in use today, while slight remains of Huntingdon Castle – a Norman motte and bailey – can still be seen.

Printing was undertaken in Cambridge in the 1520s, and the University Press – one of the oldest and largest academic publishers in the world today – was formed in 1584

Cambridgeshire also boasts other fascinating historical towns and cities. Hinchingbrooke House, once a priory, became the Cromwell family home before passing to the Earl of Sandwich, remaining their ancestral home until the 1960s. Today, Huntingdon is a thriving market town, with elements of history tucked away among its bustling, up-to-date shopping streets. 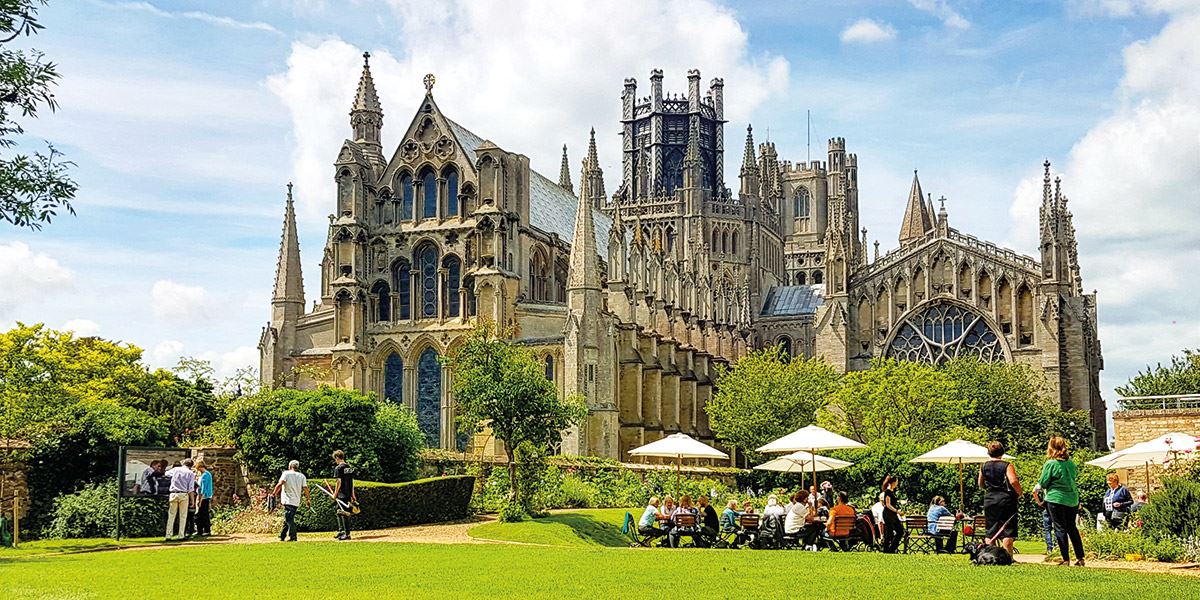 Ely, just 15 miles north of Cambridge and in the heart of the Fens, is dominated by a 12th-century cathedral, which can be seen for miles around. In AD 673, an abbey was founded in Ely, which was destroyed and later rebuilt. Construction of the cathedral began in 1083 until the dissolution of the abbey in 1539 during the Reformation. Restoration was finally completed in 1870. The name ‘Ely’ is thought to come from an old word meaning ‘district of eels’, and eels are still a delicacy of the area. Eel fishing was an important economy for the area, and a source of food and income.

Peterborough is a lively city – the largest in Cambridgeshire – and has expanded greatly over recent years since being designated a ‘New Town’ in the 1960s. It boasts a stunning cathedral, which was originally founded as a monastery in AD 655 and rebuilt between 1118 and 1238. It is one of the most intact large Norman buildings in England, and once had the remains of Mary, Queen of Scots buried beneath it. The cathedral was also the final resting place of Catherine of Aragon.