History and heritage of Fife and St Andrews

'A beggar’s mantle fringed wi’ gold,’ is how King James VI of Scotland is said to have described the ancient Kingdom of Fife. The frayed cloak or ‘mantle’ described the ragged coastline surrounding the distinctive ‘dog’s head’ or ‘begging hand’ shown jutting out into the sea on maps.

The fringe of gold referred to Fife’s once prosperous harbours, but given the area’s enduring appeal as a visitor destination, that description can just as appropriately be applied to its award-winning beaches. Traditional industries included manufacturing, salt-panning (evidence of this remains in the coastal town of St Monans) fishing, boat-building, agriculture, weaving, mining and golf – the sport said to have largely restored an ailing St Andrews’ fortunes back in the 18th and 19th centuries.

But Fife’s origins go back much further. Many place names derive from Pictish times. Cave markings dating from the Bronze Age in the ancient Wemyss Caves, between Kirkcaldy and Leven are among the most prized in Britain. St Fillan’s Cave in Pittenweem is also regarded as extremely significant. For around 600 years until the Union of Scotland and England in 1603, Dunfermline – famously the birthplace of Andrew Carnegie – was at the heart of the Scottish monarchy and its prominent Palace and Abbey ruins are open to the public. 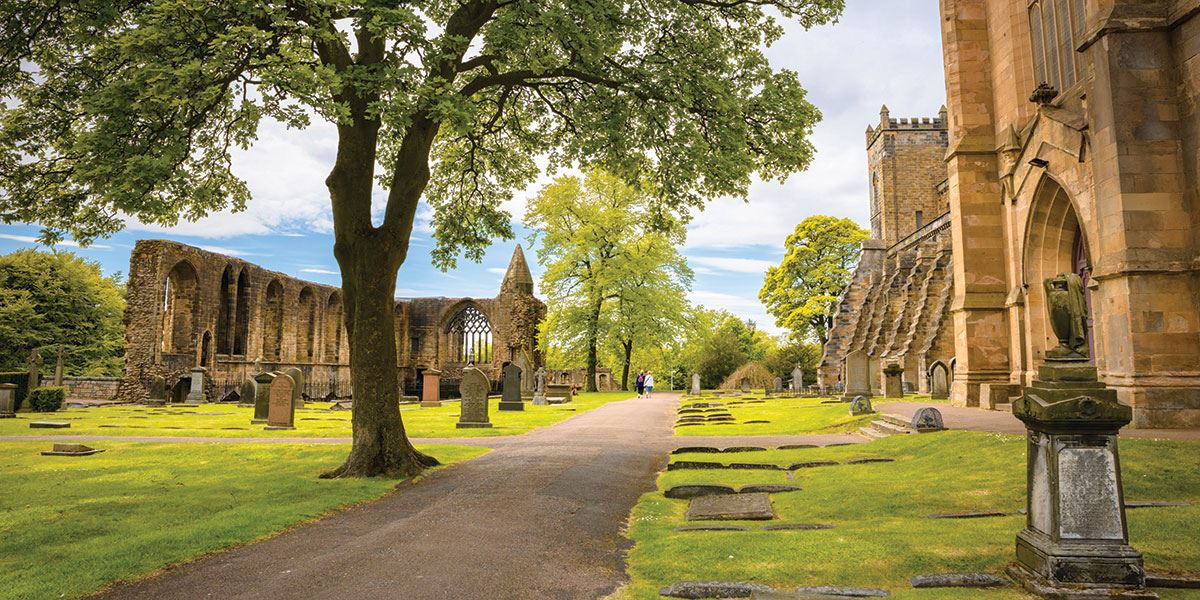 Robert the Bruce is just one of a number of kings buried in the abbey, whose grounds are said to be the final resting place of William Wallace’s mother. Some 16 miles north, Falkland Palace, with its indoor Royal or Real Tennis court and estate, now owned by the National Trust for Scotland, was also favoured by the Stuarts, particularly Mary Queen of Scots.

Fife’s history is awash with colourful tales: of the smugglers who gave their name to a popular inn in Anstruther; martyrs burned at the stake in St Andrews; witches said to have been drowned in Kilconquhar Loch and the ghosts reported to haunt many nooks and crannies. Along the coast in Largo, a monument recalls the more substantial character of Alexander Selkirk who inspired Daniel Defoe’s adventure story Robinson Crusoe.

For around 600 years until the Union of Scotland and England in 1603, Dunfermline – famously the birthplace of Andrew Carnegie – was at the heart of the Scottish monarchy and its prominent Palace and Abbey ruins are open to the public

But the story of the Kingdom is also closely intertwined with industry – from the Howe of Fife linen weavers to the miners employed in the many pits across its length and breadth. Methil, once the most important coal exporting port in Scotland, now plays a key role in the renewable energy sector. Seven miles south, the ‘lang toun’ of Kirkcaldy, a port which grew thanks to the arrival of the railway, is famous as the birthplace of Adam Smith and for the production of linoleum. More recently, former Prime Minister Gordon Brown grew up there. 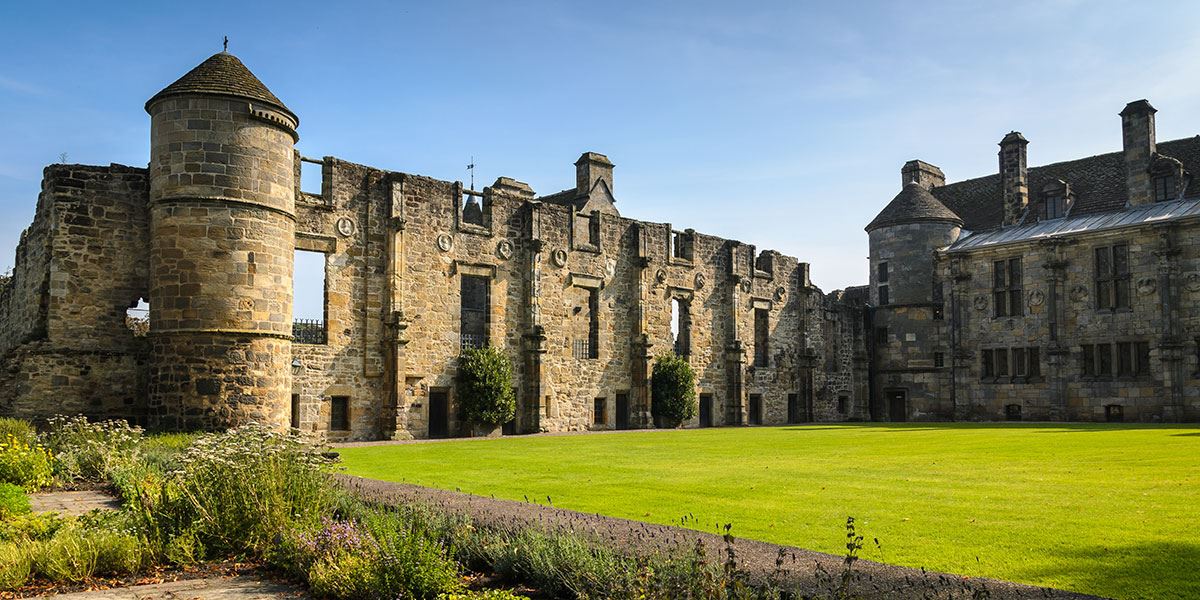 Fife’s heritage is well documented in its museums, galleries and visitor attractions. To appreciate its people, take time to step inside its historic buildings and ponder on the lives of men, women and children who have gone long before you. Walk cobbled streets or golf links in the footsteps of kings, queens, bishops, fisher folk, farmers, golfing legends, weavers, academics, merchants, politicians and philanthropists. You may not want to leave and it’s likely you’ll be back.

You can experience what life was like for the Stuart Kings and Queens at the beautiful Falkland Palace. A favourite retreat of Mary Queen of Scots, this Renaissance palace is packed with 17th-century Flemish tapestries, elaborate painted ceilings and antique furnishings. Follow in Mary’s footsteps through the palace’s interior, taking in the richly panelled Keeper’s quarters, the magnificent James V-era Chapel Royal, the Old Library and the recreated royal apartments. The extensive gardens provide the perfect setting for a tranquil walk to enjoy the colours and scents of flowers including roses and delphiniums.

Fife’s heritage is well documented in its museums, galleries and visitor attractions. To appreciate its people, take time to step inside its historic buildings and ponder on the lives of men, women and children who have gone long before you

For the sports lovers among you, there is the oldest real (or royal) tennis court in Britain, built for King James V and still used today. Keeping with the sports theme, come and play hickory golf at the Hill of Tarvit. This magnificent Edwardian mansion house was home to wealthy jute manufacturer Frederick Sharp and his family. The Sharp family were keen golfers and you too can now play their nine-hole course – Kingarrock – with original hickory clubs following the house rules written by Elisabeth Sharp when she was just 16.

Kingarrock provides a rare opportunity to turn back the clock 100 years and enjoy the game as it was played in Edwardian times. Visit kingarrock.com to book your tee-off time. Within the mansion house, designed by Robert Lorimer, there is a splendid collection of furniture, Chinese porcelain and superb paintings by Sir Henry Raeburn, Allan Ramsay and eminent Dutch artists. Visit this country house as guests of the Sharps and try your hand at the parlour games or billiards. Lorimer also designed the landscaped gardens, with formal lawns, yew hedging, flowering borders and a sunken rose garden. In summer, why not have a go at our traditional lawn game with hickory putters, a jigger and a mashie niblick? 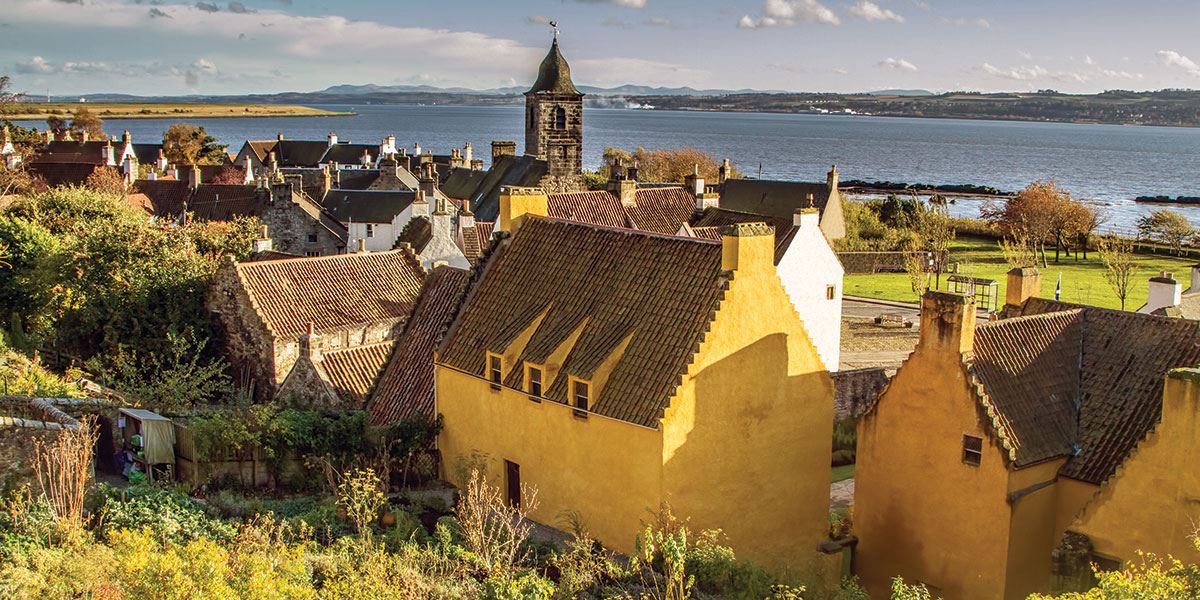 Lormier’s influence can also be felt at 14th-century Kellie Castle where he designed the magnificent plaster ceilings, painted panelling and fine furniture that visitors can still enjoy today. The grounds around the castle have plenty to explore with acres of woodland walks, a bird hide and an abundance of nature. The Arts & Crafts garden is packed with beautiful borders of old-fashioned roses and herbaceous plants, as well as fruit and vegetables.

Relive the domestic life of the 16th and 17th centuries at this riverside Royal Burgh of Culross. The old buildings and cobbled streets create a fascinating time warp for visitors. Close your eyes and you can almost hear the calls of medieval street vendors selling their wares. Explore the beautifully-refurbished Palace which dates from 1597 and imagine what it would have been like to live within the splendid interiors, featuring painted woodwork, and 17th- and 18th-century furniture. Take a wander around the reconstructed early 17th-century palace garden, and finish your trip with a cuppa and a scone at Bessie’s Cafe.

Top 10 things to do in Fife and St Andrews

How to spend 48 hours in Fife and St Andrews