Stirlingshire and Clackmannanshire have a wealth of sports to enjoy, whether you want to watch the pros or participate. In an area that boasts five senior football clubs, during the football season there is always an entertaining fixture to go along and watch on a Saturday afternoon.

Stirling Albion, Falkirk FC, East Stirlingshire, Stenhousemuir, and Clackmannanshire’s top club Alloa Athletic – known as the Wasps – all compete in the Scottish Football League system. Of those, Alloa currently competes at the highest level, in the Scottish Championship. Falkirk FC who compete in Scottish League One, play their home games at the Falkirk Stadium on the outskirts of the town, within easy access from the M9 from Stirling, while Alloa play home matches at Recreation Park, on the town’s Clackmannan Road.

Although Stirling Albion currently play in the fourth tier of Scottish football, they were taken over by their own Supporters’ Trust to proudly become Britain’s first fully-owned community club. The club is based in the city’s sports village at Forthside, also home to Stirling Wanderers Hockey Club and the ground of Stirling County Cricket Club. 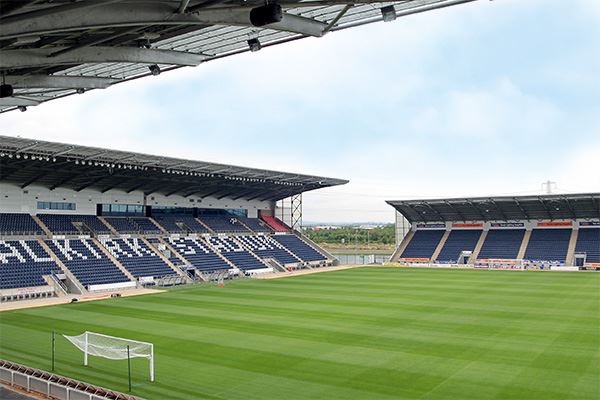 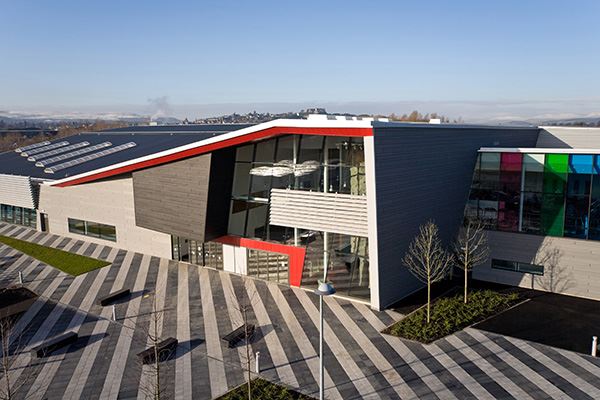 The Peak at Stirling Sports Village

The sports village is dominated by The Peak, Stirling’s £27.3 million indoor sports complex. The biggest single development for sport and leisure in Stirling for over 30 years is home to the city’s swimming pool, climbing wall, gym and ice rink, which was awarded the Ice Rink of the Year 2012 title at the Scottish Curling Awards. The complex is also cost-effective as excess heat from the ice-making process is fed back to heat the 25m swimming pool.

Curling has a long history in the Stirling area, and at the right time of year if the ice freezes thick enough to walk on the Lake of Menteith, you can often find a curler on the lake willing to let you try your hand at the sport. When it reaches ten inches thick an historic bonspiel or grand match could take place.

The sports village is dominated by The Peak, Stirling’s £27.3 million indoor sports complex

Scotland is the home of golf and it thrives across this area. Stirling and its surrounding area has a number of nine and 18-hole golf courses – the largest of which is the Stirling Golf Course, located in the Kings Park area of the city – in the shadow of the imposing medieval castle. Stirling University also offers a nine-hole course, with views up to the National Wallace Monument.

Most local golf clubs sell day tickets, however, so get out and enjoy some wonderful courses with the additional bonus of spectacular views to the distant Highlands. And if you can’t afford the course fees at Gleneagles in Perthshire – home of the 2014 Ryder Cup just only 15 miles from Stirling – try Braehead Golf Club near Alloa or Glenbervie at Larbert.

On the outskirts of the city of Stirling, at Bannockburn, there is the Brucefields Family Golf Centre with its driving range, while of Bridge of Allan and Dunblane also offer courses with scenic views. Stirling is also a major centre of sports training and education in Scotland. 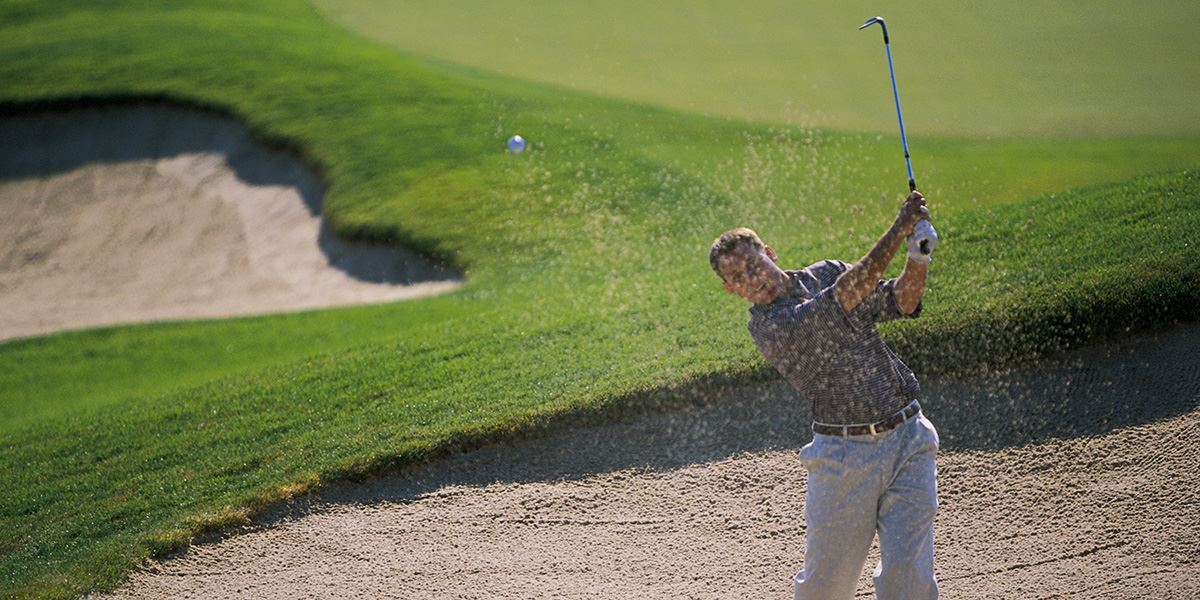 Golf thrives across this area

The headquarters of the Scottish Institute of Sport, which opened in 2002, is a purpose-built facility on the campus of Stirling University. Also at the university are the Scottish National Swimming Academy, and the Gannochy National Tennis Centre where world tennis star Andy Murray, from nearby Dunblane, has trained. In April 2014 Murray was awarded the Freedom of the City of Stirling, and an honorary degree from Stirling University, in recognition of his tennis achievements.

Stirlingshire and Clackmannanshire are also home to several senior rugby union clubs. Stirling County RFC, who play at Bridgehaugh Park, less than a mile from the city centre, compete in the Scottish Premiership. The club has produced several international stars, most famously Kenny Logan, who won 70 caps for Scotland between 1992-2003. Falkirk, who play in the Scottish Premiership Divisio, Grangemouth and Hillfoots, who play home matches in Tillicoultry, Clackmannanshire, also have senior teams.

Falkirk also represents the area in basketball. Falkirk Fury Basketball Club – currently called Clark Eriksson Fury in a sponsorship deal with local firm Clark Eriksson – play in the Scottish Men’s National League, the top league in Scottish basketball. They play most of their home games at the Mariner Centre in Camelon.

Stirling and its surrounding area has a number of nine and 18-hole golf courses – the largest of which is the Stirling Golf Course, located in the Kings Park area of the city

For keen runners, try the annual Dumyat (pronounced Dum-aye-at) hill race, which provides a stern challenge comprising a 390-metre climb (1280 feet) over an eight km (five mile) distance on one of the hills in the Ochil range overlooking Stirling University. The race, which attracts runners from all over Scotland was first created in 1972 when a university psychologist laid a £1 bet claiming the return trip from the university’s Gannochy pavilion to the top of the Dumyat was impossible in less than an hour. He lost his bet by three minutes. It is now held annually in May.

The Stirlingshire and Clackmannanshire areas are blessed with wonderful countryside, so for a more leisurely stroll there is a wide variety of landscapes in which to wander. Dumyat itself offers a comfortable walk to the summit from a convenient parking area and breathtaking views over the surrounding landscape. But Stirling, Falkirk, and Clackmannanshire offer routes to keep walkers happy for days.

The Ochils and the Campsie Fells, while not as high as the Trossachs further north, command superb views over the surrounding valleys, while the Union and Forth and Clyde canals take you through beautiful rural scenery as well as the sites of Scotland’s industrial heritage. 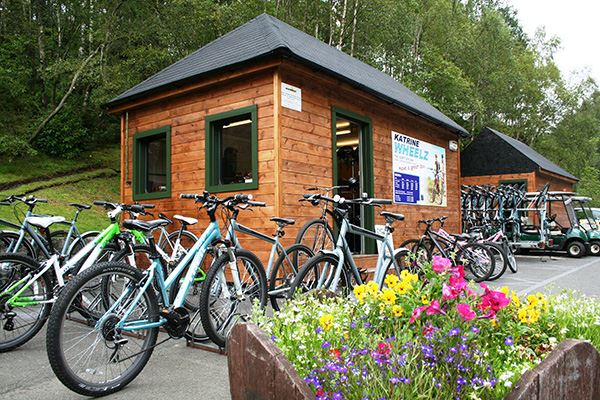 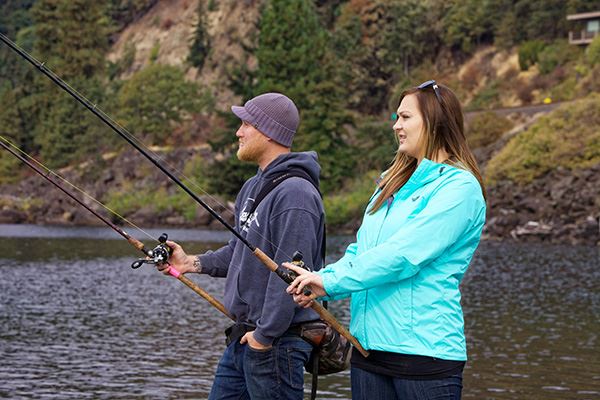 There are a number of great fishing opportunities in this region

For an even more leisurely pursuit, what about fishing? There is salmon and trout fishing in the Rivers Teith, Devon, Allan and Forth, while a popular coarse fishing location is the Union Canal near Falkirk. There are also fine trout fisheries on the outskirts of Stirling. Traditional Scottish boat fishing for trout is available in magnificent surroundings at Gartmorn Dam in Clackmannanshire, which celebrated 300 years in 2013, and the Carron Valley Reservoir. Around Falkirk, the River Carron has been described as ‘the jewel in the crown’, after salmon were reintroduced. Day permits are available in most riverside towns.

Pony trekking and riding centres can also be found throughout Stirlingshire and Clackmannanshire, many catering for riders of all standards, from the young beginner to the experienced rider, while the areas are also good venues for family cycling. The Forth and Clyde and Union canals have tow-paths along which you can cycle, while there are many quiet lanes in the countryside also popular with family cyclists.