Some of the finest examples of Bath’s history and architecture can be explored at the Roman Baths, Royal Crescent, Circus, Pulteney Bridge and Bath Abbey.

Visit the heart of the World Heritage Site. Around Britain’s only hot spring, the Romans built a magnificent temple and bathing complex that still flows with natural hot water. See the water’s source and walk where Romans walked on the ancient stone pavements.

Thermae Bath Spa
Using the warm, mineral-rich waters which the Celts and Romans enjoyed over 2,000 years ago, Thermae Bath Spa is Britain’s original and only natural thermal Spa. Thermae is a remarkable combination of ‘old and new’ where historic spa buildings blend with the contemporary design of the New Royal Bath. 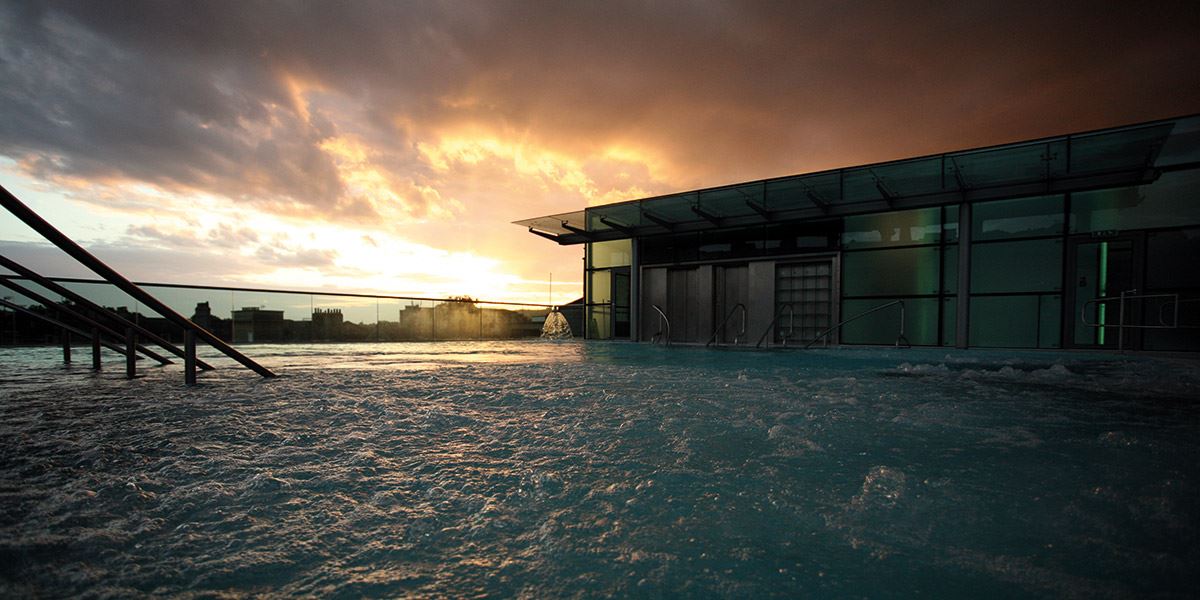 The Royal Crescent, The Circus & Pulteney Bridge
The Royal Crescent was built between 1767 and 1775 and designed by John Wood the younger; the crescent contains some 30 houses. The Circus, a masterpiece of John Wood the Elder, is a stupendous creative accomplishment and one of the key reasons Bath was awarded the title of World Heritage Site by UNESCO. Pulteney Bridge is the only historic bridge, apart from the Ponte Vecchio in Florence, to have shops built into it and was designed by Robert Adams.

Bath Abbey
Begun in 1499, Bath Abbey is the last of the great medieval churches of England. Over the past twelve and a half centuries, three different churches have occupied the site of today’s Abbey; an Anglo-Saxon Abbey Church dating from 757, a massive Norman cathedral begun about 1090, and the present Abbey church.

500BC (some say much earlier)
Legend has it that Bladud, father of Shakespeare’s King Lear, discovered the springs and the locally-living Celts began to worship here, dedicating the springs to their God, Sul.

AD43
The Romans started the development of Bath. The city was located on one of the Romans’ principal roads, the Fosse Way, which stretched from Exeter to the Humber. The Romans developed Bath as a city of recreation, rather than a garrison, and built around the hot springs a sophisticated series of baths used for bathing and curative purposes. A temple, dedicated to the goddess Minerva, was built alongside the baths and this area formed the centre of Aquae Sulis.

AD577
A great battle at Dyrham (just north of Bath) saw the demise of the Roman occupation in the South West when the Saxons triumphed.

AD675
The Saxons founded a monastery which was to become one of the most important in England. Situated very close to the site of the present Abbey, it included the first of Bath’s three Abbeys built in AD 781. 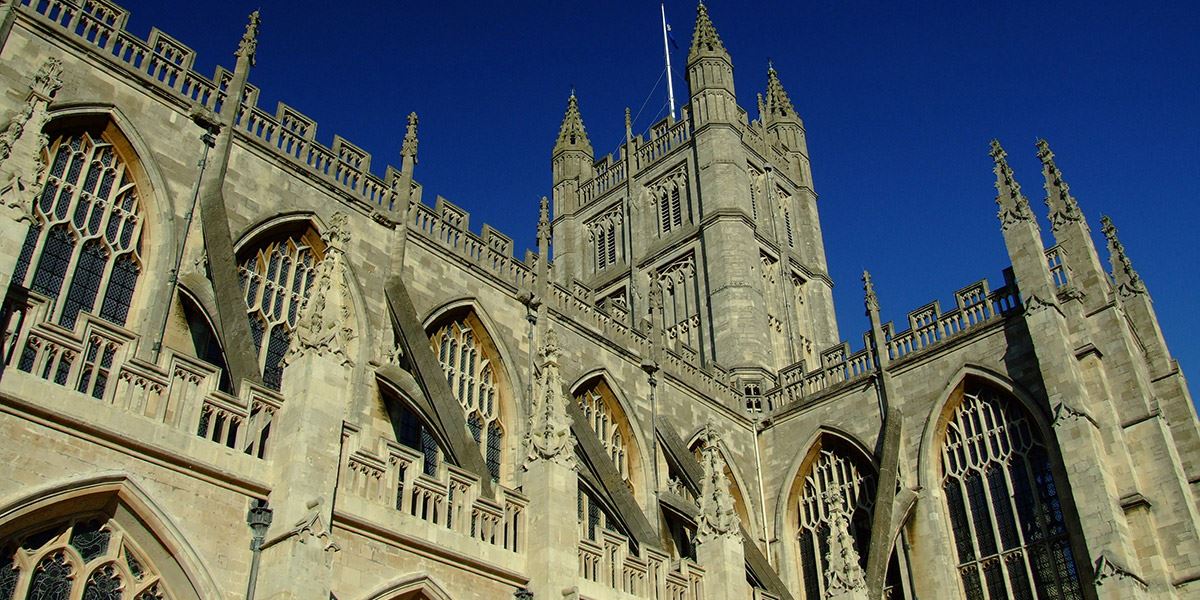 AD973
The monastery was used for the coronation of King Edgar, the first monarch to rule over a united England. His coronation took place in the Saxon abbey in the presence of the Archbishops of Canterbury and York in a service which is little changed and is still used.

11th century
Bath fell victim to revolt and about this time Bishop John of Tours bought the city for £60 and built a vast cathedral over the site of the former monastery.

1499
Bath’s third Abbey was built under the direction of Bishop Oliver King who was prompted to start the rebuilding after a powerful vision of angels whom he saw assisting with the building by climbing a ladder to heaven. The image is now represented in carving on the recently restored west front. Bath’s Abbey is known as the “Lantern of the West” because of its exceptional stained glass. Bath flourished on the strength of its wool trade throughout the Middle Ages and the three baths (Kings Bath, Cross Bath and Hot Bath) continued to attract visitors, mostly the sick and the poor who came in search of a cure or to benefit from the city’s charities.

1668
Samuel Pepys, the famous diarist, wrote of Bath and the bathing “it cannot be clean to go so many bodies together in the same water”. Bath’s population was less than 1200 and there were only about 150 houses.

1692,1702 and 1703
Queen Anne came to Bath to take the waters and these royal visits began Bath’s development.

Early 1700s
Richard “Beau” Nash, Ralph Allen and John Wood came to Bath and it was these three men who created the new city. Nash changed the city’s social structure and Allen and Wood provided the public buildings, homes and street including the renowned Circus and Royal Crescent. 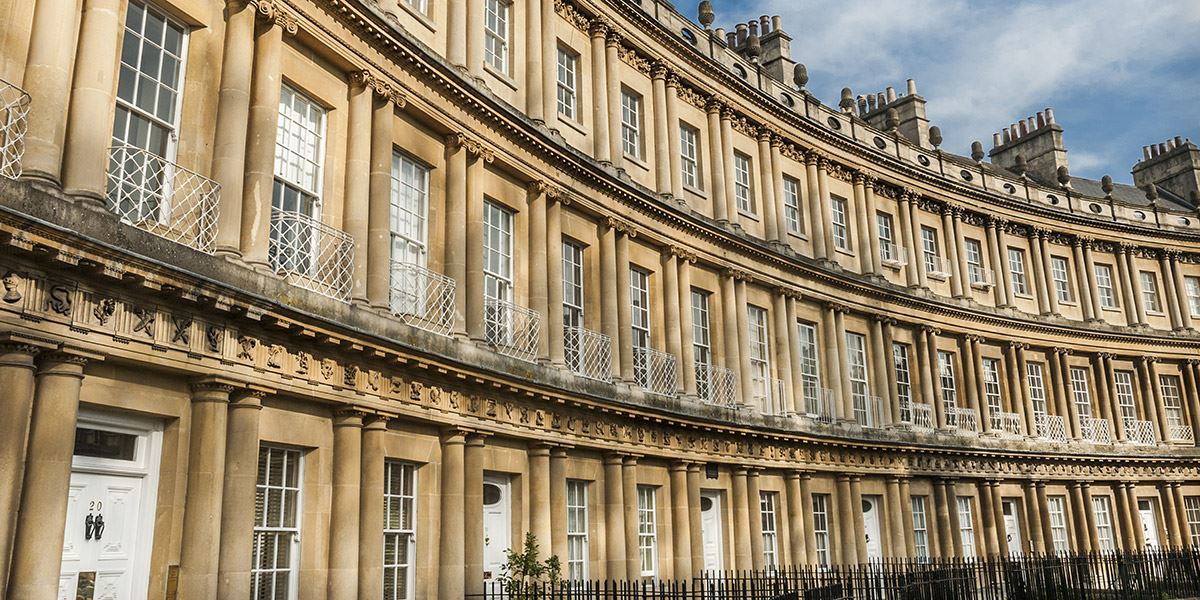 1703
Beau Nash arrived in Bath from London. Despite being a professional gambler, he was soon accepted by society. Following the death in a duel of Captain Webster, the Master of Ceremonies, Nash succeeded him as “King of Bath”. Nash had a passion for order, propriety and cleanliness, set new social rules and reformed and regulated the fares of the sedan chair owners who had been unruly and bullying. These regulations form the basis of the regulations, which govern modern taxis.

1710
Ralph Allen arrived in Bath from Cornwall to become assistant to the postmistress. He later made his fortune by reorganising the main postal routes across England avoiding London which all routes had formerly passed through. This earned him a considerable annual sum from the Post Office. In 1727 Allen bought the stone quarries at Combe Down and with the help of architect, John Wood, transformed the city.

1727
(The year his son, John Wood the younger, was born) Wood was brought to Bath from Yorkshire by Allen. Wood, like many of his colleagues at that time, was an enthusiast of the 16th-century Italian architect, Andrea Palladio, and his dream was to recreate the former splendour of Bath in the fashionable Palladian style. Queen Square, designed in 1728, was Wood’s first major work, followed by Prior Park, designed in 1735, which was built for Allen and to show off Bath stone to its best advantage. He also drew up designs for the Circus and the Royal Crescent but it was his son, John Wood the younger, who completed the construction of these masterpieces. Life at this time took on a strict routine. Early morning there was a ritual visit to the Pump Room to take the regulation three glasses of water, to see and be seen. Church was attended at midday, dinner at three and then a rest until the great round of card playing, dancing and socialising started in the evening.

1754
The building of the Circus, a circle of 33 houses divided into three sections commenced. Drawing inspiration from the Colosseum, it shows three classic styles of architecture – Doric, Ionic, and Corinthian – while the carved frieze represents the arts and the sciences. The acorns on the roof commemorate the story of Bladud whose pigs often fed on acorns. 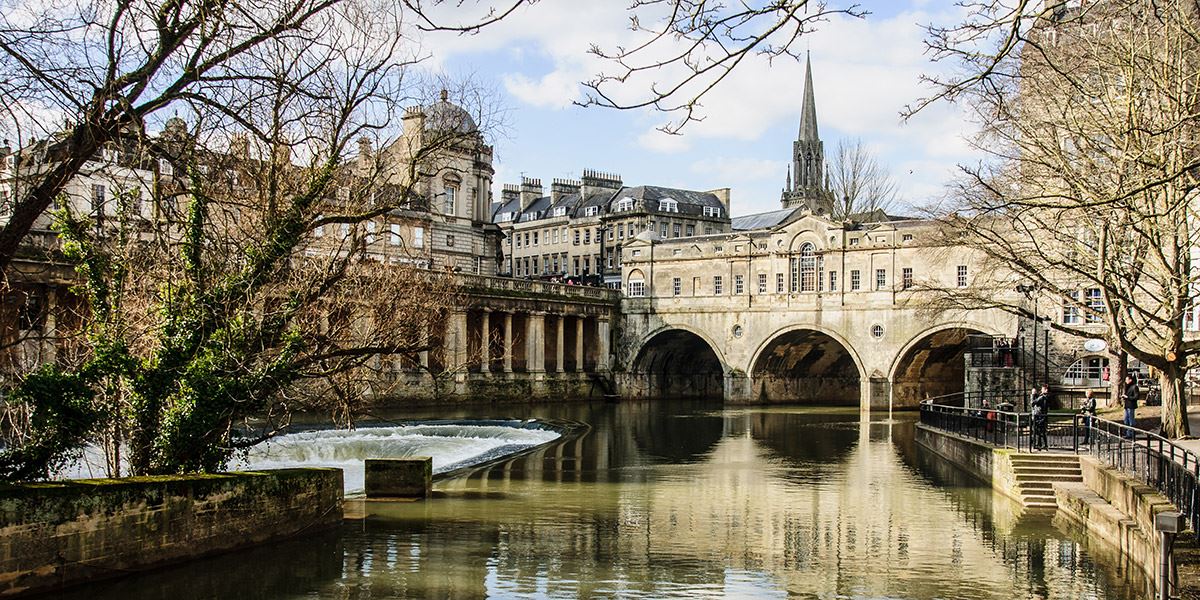 The beautiful buildings of Bath were built hundreds of years ago

1754
John Wood the Elder died (just after work on the Circus began), followed by Nash’s death in 1761 and Allen’s death in 1764. The Royal Mineral Hospital was the only project on which the three men collaborated with Dr William Oliver (famous as the inventor of the Bath Oliver biscuit). The hospital was started in 1737. The Pump Room, Assembly Rooms and Guildhall as we know them today were not built until after their deaths.

1767-1774
The Royal Crescent was constructed. Under the direction of John Wood the younger, several different builders and craftsmen completed 30 houses. Set on a hill with sweeping lawns to the front, the imposing sweep of the semi-elliptical curve is emphasised by the huge Ionic columns.

1769
Work began on the Assembly Rooms, which were designed by John Wood the younger. The interior includes the ballroom, the Tea Room and the Octagon – three superb 18th-century rooms. Although severely damaged by bombs in 1942, the Rooms are now restored to their former splendour. In the basement is the Museum of Costume.

1770
Robert Adam, the renowned Scottish architect, designed Pulteney Bridge to connect the Bathwick Estate with the city. Based on the Ponte Vecchio of Florence, the bridge is unusual as it is lined with shops. It was completed in 1774. 1776 Thomas Baldwin, the city surveyor, designed the Guildhall which included the magnificent Banqueting Room which is elaborately decorated in the Adam Style with its chandeliers made in 1778. 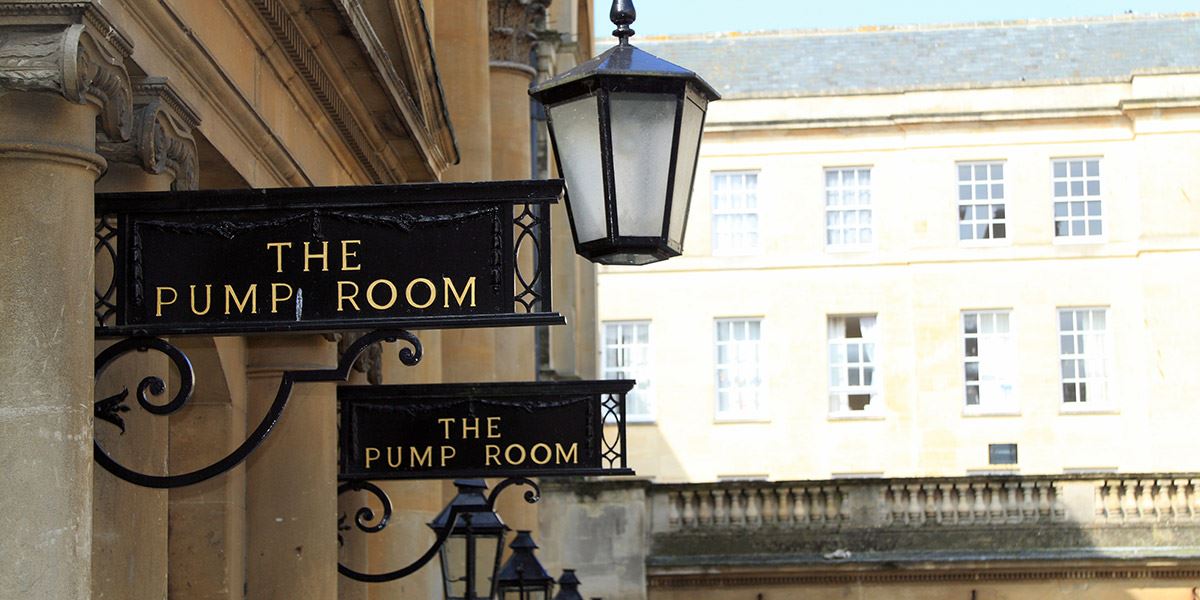 1788
Baldwin commenced the building of Great Pulteney Street, Bath’s most impressive street. It is 1100 feet long and 100 feet wide and ends at the Holburne Museum which was built in 1796 by Charles Harcourt Masters and was formerly the Sydney Hotel before becoming a museum in 1915. 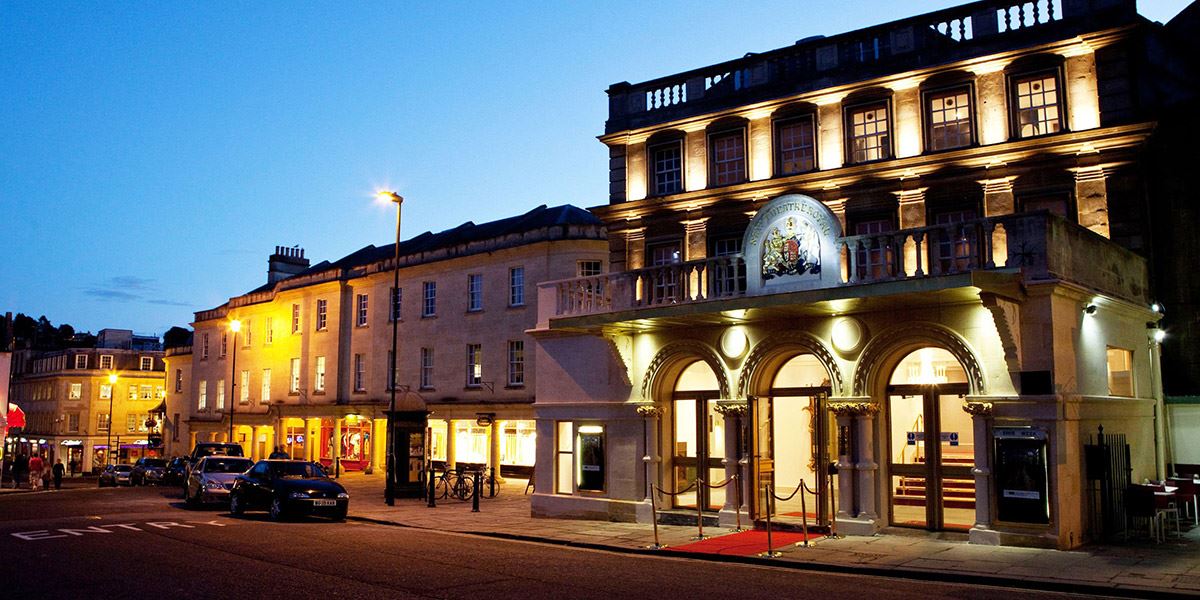 1810
Kennet and Avon Canal opened. The canal connected the River Thames with the Severn Estuary and was used for the transportation of coal and other products. 1830 Princess Victoria opened Royal Victoria Park which was designed by City Architect of the time, Edward Davis. It was the first of many places in England to be named in her honour.

1840
The canal was superseded by the Great Western Railway, built by Isambard Kingdom Brunel who also built Bath Spa Station.

1878
Major Charles Davis discovered Roman remains which led to the excavation of the Great Bath. The Queen’s Bath was demolished during these major excavations.

1940s
Ministry of Defence Navy Department came to Bath and occupied various sites in Bath, including the Empire Hotel and Foxhill. 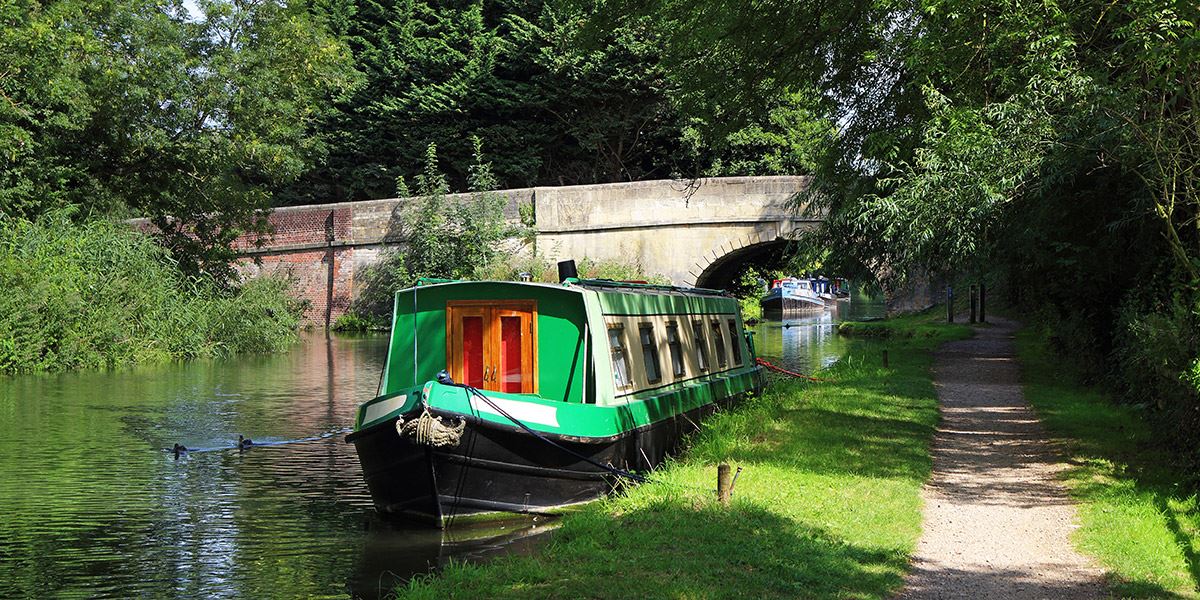 1966
The new University received its charter and opened at Claverton.

1982
Theatre Royal reopened after extensive refurbishment at a cost of £2 million. The magnificent curtains were a gift of Lady Oona Chaplin, the wife of Charlie Chaplin.

1987
Bath was inscribed by UNESCO on the World Heritage List in recognition of the city’s famous architecture.

2006
Thermae Bath Spa opened in August restoring over two thousand years of tradition as the waters come into full use and provide benefit once again.

Post 2019
Plans are now in place to re-open Cleveland Pools, the country’s only surviving Georgian lido which closed in 1984. It is situated just off the Kennet and Avon Canal near Sydney Gardens.

Outdoor attractions in and around Bath