The buzz of Edinburgh sits in perfect contrast to the peaceful tranquillity of the surrounding Lothians region. With Scotland’s most famous castle dominating the city skyline, there is plenty to see and do with the perfect balance between all things traditional and contemporary.

Its magnificent architecture shifts from the lofty tenements and narrow closes of its medieval Old Town as they tumble down the spine of the Royal Mile, to the grace and geometric precision of the Georgian New Town. Above it all, in its towering splendour, stands the Castle.

Close to Edinburgh, yet a million miles away from the bustle of city life, the Lothians are the perfect place to relax and unwind. The area consists of three distinct regions – East Lothian, Midlothian and West Lothian, which together make up Edinburgh’s surrounding coast and countryside. Historic Environment Scotland cares for the largest number of historic visitor attractions in the country, holding the key to more than 5,000 years of Scottish history and culture. These attractions offer great days out for both young and old, with lots to see and do. This area is home to 26 Historic Environment Scotland properties including the famous Edinburgh Castle and the historical landscape of Holyrood Park.

Edinburgh Castle is a proud and majestic symbol of Scotland, famous the world over. Perched on an extinct volcano, this instantly recognisable fortress is a powerful national symbol and part of Old and New Towns of Edinburgh World Heritage Site. Its story is Scotland’s story. From the One O’Clock Gun and Mons Meg to the Honours of Scotland and the Stone of Destiny, there is a lot to see at this magnificent property. Visitors can also follow in royalty’s footsteps in the chamber where Mary Queen of Scots gave birth and the Great Hall, where monarchs feasted. 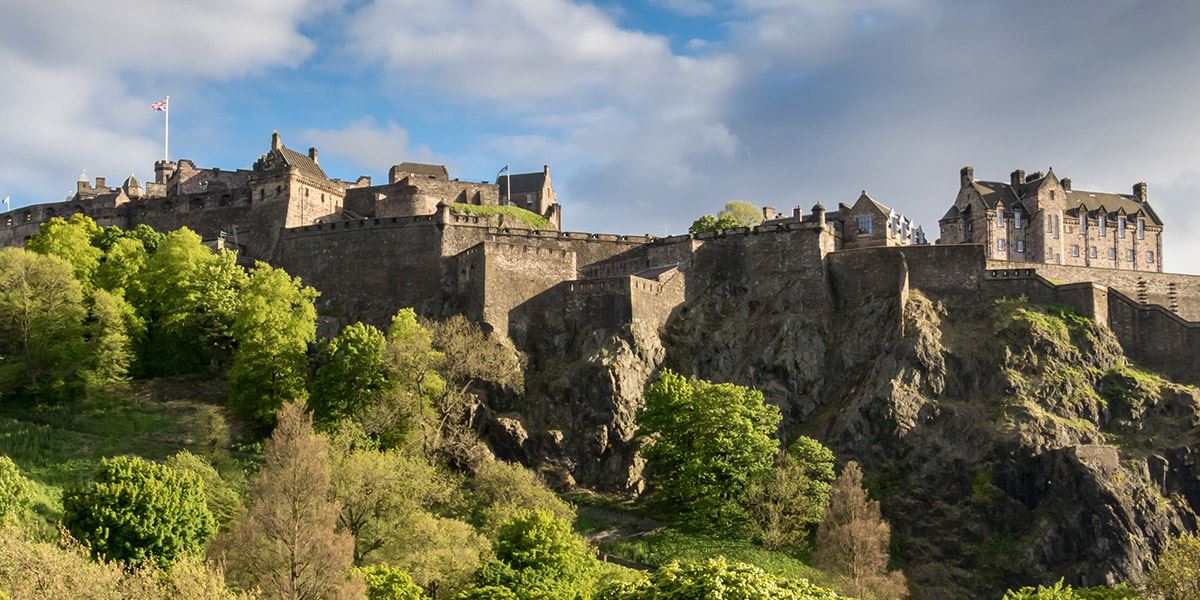 Edinburgh Castle is a proud and majestic symbol of Scotland, famous the world over

Edinburgh Castle has a wealth of history. The Castle Rock has been a stronghold for more than 3,000 years. It has some wonderful and fascinating history. Archaeologists have found evidence for human occupation of the Castle Rock reaching back to 900BC, the late Bronze Age. During the Roman occupation of Scotland in the 1st and 2nd centuries AD, it was a thriving settlement. In the Middle Ages Edinburgh became Scotland’s chief royal castle – seat of royalty, headquarters of the sheriff of Edinburgh, military garrison and storehouse of the royal gun train, and repository of the nation’s crown jewels and state records. The Jacobite siege of 1745, during which Bonnie Prince Charlie held court at Holyrood Palace but could not wrestle the castle from the Hanoverian King George II, proved to be the last.

Since that time, the ancient fortress has continued to serve as an active army base, but has since found new roles – as a major visitor attraction, as home of the Scottish National War Memorial and two proud Scottish regiments (the Royal Scots and the Royal Scots Dragoon Guards), and as host of the world-famous Edinburgh Military Tattoo.

Perched on an extinct volcano, this instantly recognisable fortress is a powerful national symbol and part of Old and New Towns of Edinburgh World Heritage Site

Not far from the Castle is the scheduled ancient monument of Holyrood Park. This unique historic landscape in the heart of the city has dramatic crags and archaeology spanning thousands of years. Featured within the park is Arthur’s Seat, consisting of four hill forts dating from around 2,000 years ago. There is also the St Anthony’s Well, a stone bowl and massive boulder, which lies on a path up to the gaunt ruin of St Anthony’s Chapel, which stands on a spur overlooking the Forth. Downhill is St Margaret’s Well, one of seven holy wells in the park. Holyrood Park was enclosed by a stone-built boundary wall in 1541.

As well as its rich cultural heritage, the park offers walks, solace, wildlife, volcanic geology and unparalleled vistas of the city from many vantage points. Out of the city centre stands the well-preserved medieval Craigmillar Castle. This property is especially unique as it has a tower house, courtyard and gardens. Craigmillar’s story is linked with that of Mary Queen of Scots and is one of Scotland’s most perfectly-preserved castles. The property began as a simple tower-house residence. Gradually, over time, it developed into a complex of structures and spaces, as subsequent owners attempted to improve its comfort and amenity. As a result, there are many nooks and crannies to explore. Of equal importance is the parkland, and the present-day Craigmillar Castle Park has fascinating reminders of the castle’s days as a rural retreat on the edge of Scotland’s capital city. 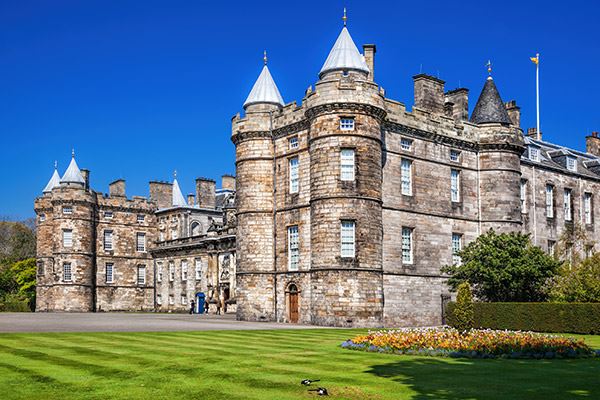 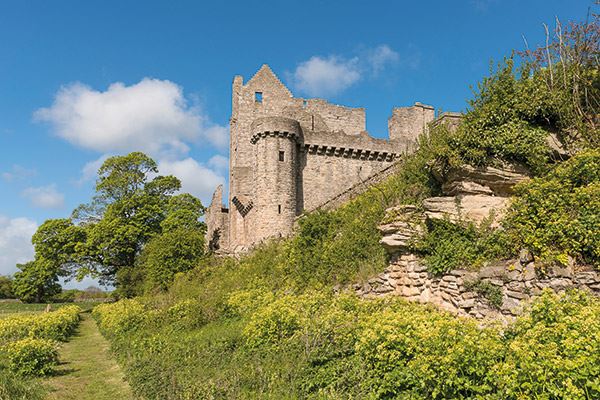 Craigmillar Castle, one of Scotland’s most perfectly-preserved castles

At the core lies the original, late-14th-century tower house, among the first of this new form of castle built in Scotland. It stands 17m high to the battlements, has walls almost 3m thick, and holds a warren of rooms, including a fine great hall on the first floor, and the so-called ‘Queen Mary’s Room’ beside it, where Mary is said to have slept when staying there as a guest of the Prestons. In all probability, Mary resided in a multi-roomed apartment elsewhere in the courtyard, probably in the east range.

Featured within Holyrood Park is Arthur’s Seat, consisting of four hill forts dating from around 2,000 years ago

Further afield in West Lothian is Linlithgow Palace. The magnificent ruins of this palace are set in a park beside a loch. Most of the Stuart kings lived here, and numerous renovations to the palace’s grand façades and chambers were carried out as each monarch sought to create the ideal modern palace. The beautiful courtyard fountain has been carefully restored and is now on full view to visitors. A well surfaced walkway around the loch also gives visitors good views of the abundant water birds including swans, ducks and great crested and little grebes. In East Lothian, Dirleton Castle and Gardens is one of the oldest surviving castles in Scotland. For 400 years, the castle stood as a magnificent fortress-residence for three successive noble families.

The castle has boasted a garden probably since its earliest days as a medieval fortified residence. Today there is a colourful blend of traditional formal gardens and more contemporary plantings, including – as the Guinness Book of Records testifies – the world’s longest herbaceous border. 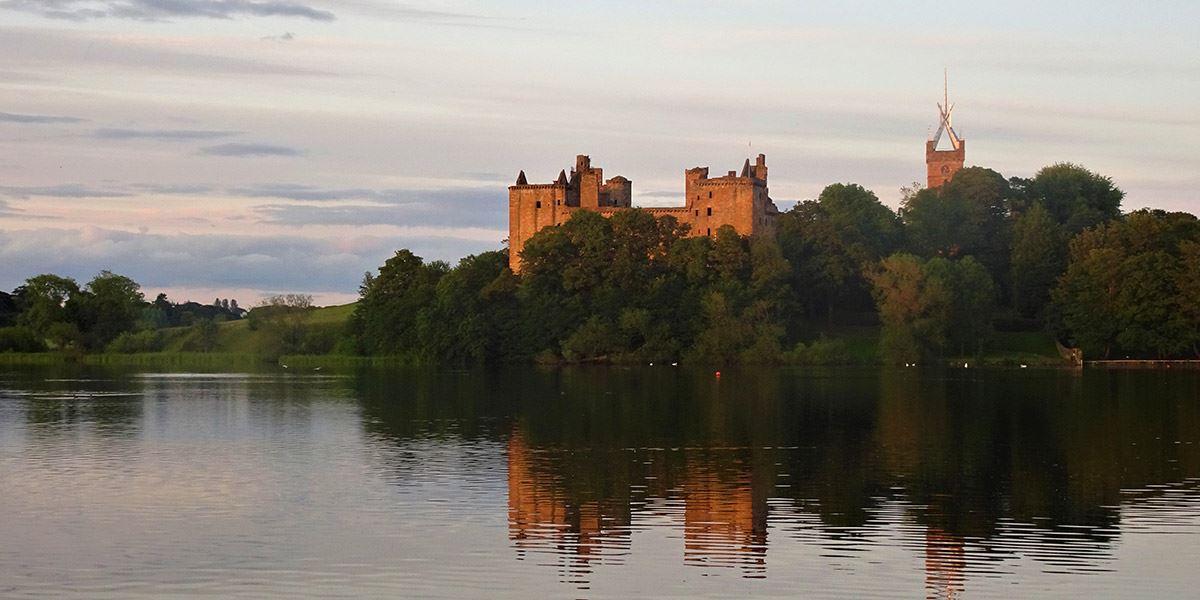 The magnificent ruins of Linlithgow Palace

Crichton Castle is one of Midlothian’s finest properties. The castle stands tucked away out of sight, on a terrace overlooking the River Tyne in Midlothian. Built as the lordly residence of the Crichtons and later home to the earls of Bothwell, this property is an eye-catching 16th-century courtyard façade. Crichton Glen is rich in woodland and meadow, with abundant wildflowers and birdlife. The castle is also an important bat roost and a footpath between Crichton and Borthwick castles makes this a great place for a beautiful afternoon stroll.

These are just a few of the sites in the care of Historic Environment Scotland in the Edinburgh and Lothians area. The rich built heritage of the area is really outstanding and with so much to see and explore you are guaranteed never to have a dull moment.