No-one knows London like a cabbie. London black cab driver Tina Palmer takes us on a (free!) tour of the city where she lives and works.

How long have you been a black cab driver?
For seven years now. I used to work in the City of London – I’ve always wanted to be a cabbie since I was a youngster but the timing was never right. Finally, I took the plunge and I’ve never looked back – it’s the freedom it gives me that I love.

What’s your earliest memory of London?
I was born on City Road, near Angel, and later lived in Islington. But my first real memory of London was being taken by my grandmother to Oxford Street at Christmas to see Santa at Selfridges. There’s nowhere like London at Christmas, especially for a child – magical! 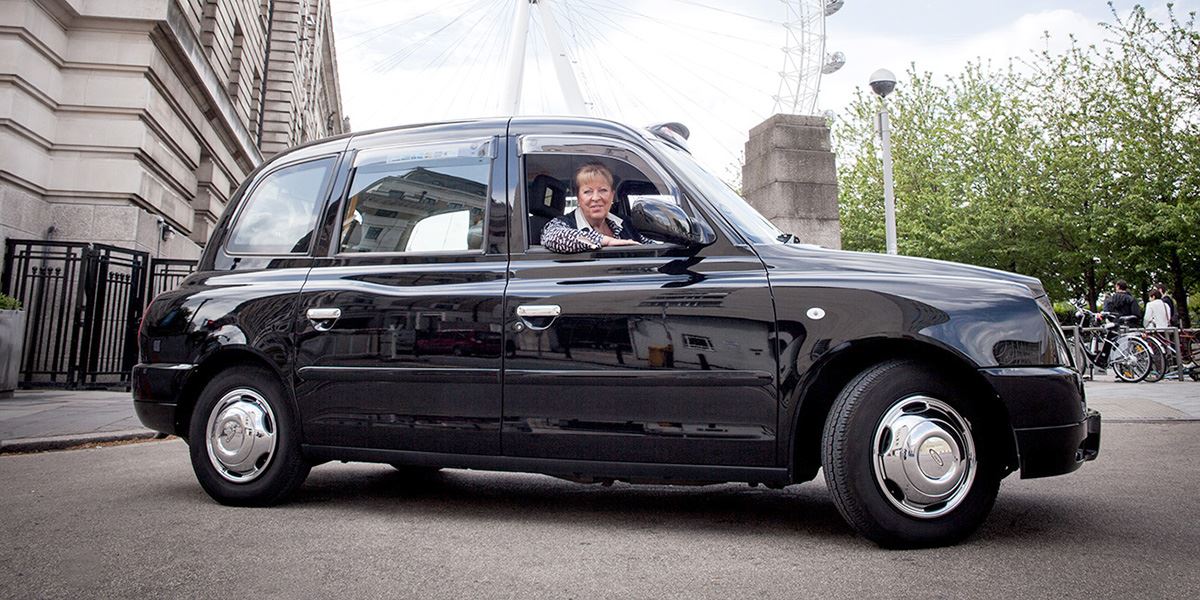 Tina Palmer in her black cab

What’s your favourite view of London?
It has to be Waterloo Bridge – from either side of the river, and not just at sunset! It is beautiful at any time of day. Whenever I’m about to cross the bridge I always say to my passengers “the best views, St Paul’s and the City of London (Square Mile) to the east, and Westminster to the west!”.

What is the Knowledge?
The Knowledge is a test which prospective black cab drivers have to take before they’re granted a licence. To become a London cabbie you have to know hundreds of routes, and all of the 25,000 to 30,000 landmarks located within a six-mile radius of Charing Cross. It took me about three and a half years to complete which is about average. I started off thinking it couldn’t be that bad, but I soon realised the work and studying that was expected of me. It takes determination and fortitude. This is recognised when you are awarded your license. I am proud to be a black taxi driver and proud of my colleagues, other black taxi drivers. I love my job, and would encourage anyone to take ‘the London Knowledge’, it’s the best job in the world, every day is different and you have the pleasure of meeting so many interesting and lovely passengers.

Where do you stop for lunch?
I sometimes stop at the Regents Bar & Kitchen on Inner Circle of Regents Park, they do delicious cakes and sandwiches there, and it’s easy to park, also I can stretch my legs for a lovely walk in the park.

Has anyone asked you to “follow that car”?
Not yet! I think that only happens on TV. But it’s true that London cabs are the fourth emergency service – I’ve had a few women in labour in the cab!

What’s your favourite route?
From Admiralty Arch down the Mall to Buckingham Palace. When the flags are out on the mall it still always gives me a buzz. But London is so lovely – there are so many great sights along the routes I drive. 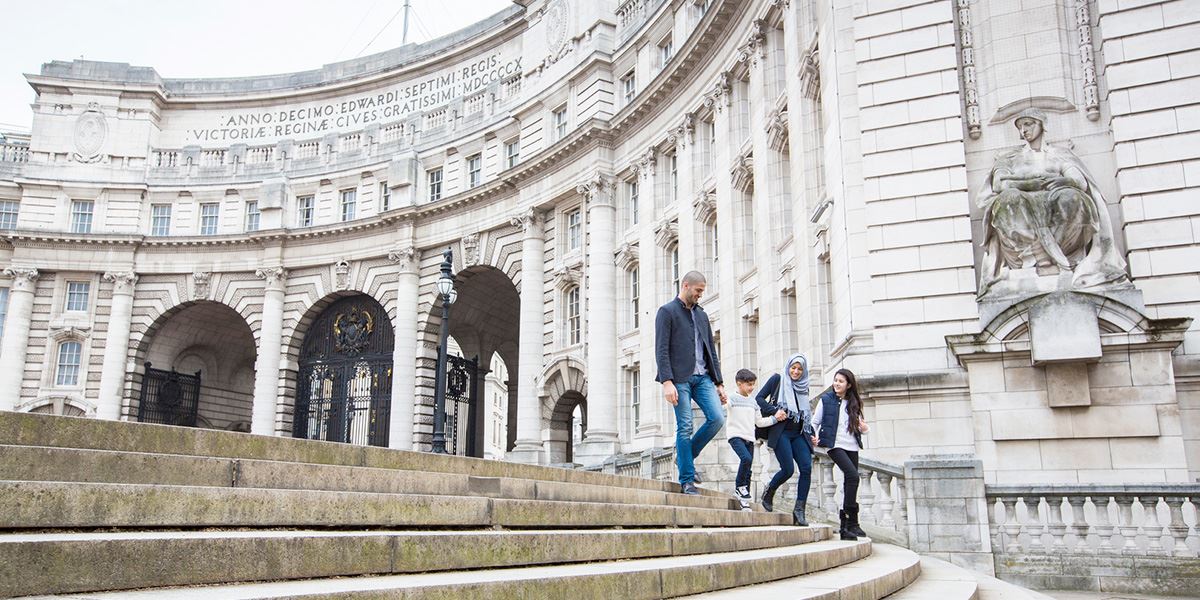 Which celebrities have you had in your cab recently?
John Partridge, the ‘Eastenders’ actor, and the Eurovision Song Contest winner Conchita – hard to miss! Also the former Labour Party leader Ed Miliband – he seemed very nice, and he gave me a tip!

What’s your favourite walk?
Around St James’s Park – it’s so beautiful, very Royal, well kept, lovely views. I never get tired of it.

If you wanted to show someone the essence of London, where would you take them?
The Shard for a view of London from up in the clouds, Waterloo Bridge for a stunning view on the ground. However St Paul’s would be essential, it’s just such an iconic building. During the bombing of London in World War II, Winston Churchill ordered that St Paul’s must not be lost, because it would effect the morale of the British people and would be disastrous. I have just completed a history tour exam – St Paul’s had its own army of volunteers called ‘St Paul’s watch’. Every night they guarded St Paul’s Cathedral. They stayed on the roof and perimeter, and when incendiary bombs fell they threw them off the roof and they were then extinguished.

Favourite place to eat?
I always like to try our different places – there’s a never-ending choice of great restaurants in London. My current favourite is the Hakkasan in Mayfair. The food there is always lovely and it’s a nice atmosphere. The Wolseley in Piccadilly is also a favourite.

Best place in London for a first date?
I’m married, so it’s a long time since I’ve had a first date, but if I was going on one, a good spot would probably be the Radio Rooftop Bar in the Strand. It’s buzzy, there are lots of lively young people around, and the views are superb. Another contender would the Rosewood hotel in Holborn – the live performances in the jazz bar are very pleasant. 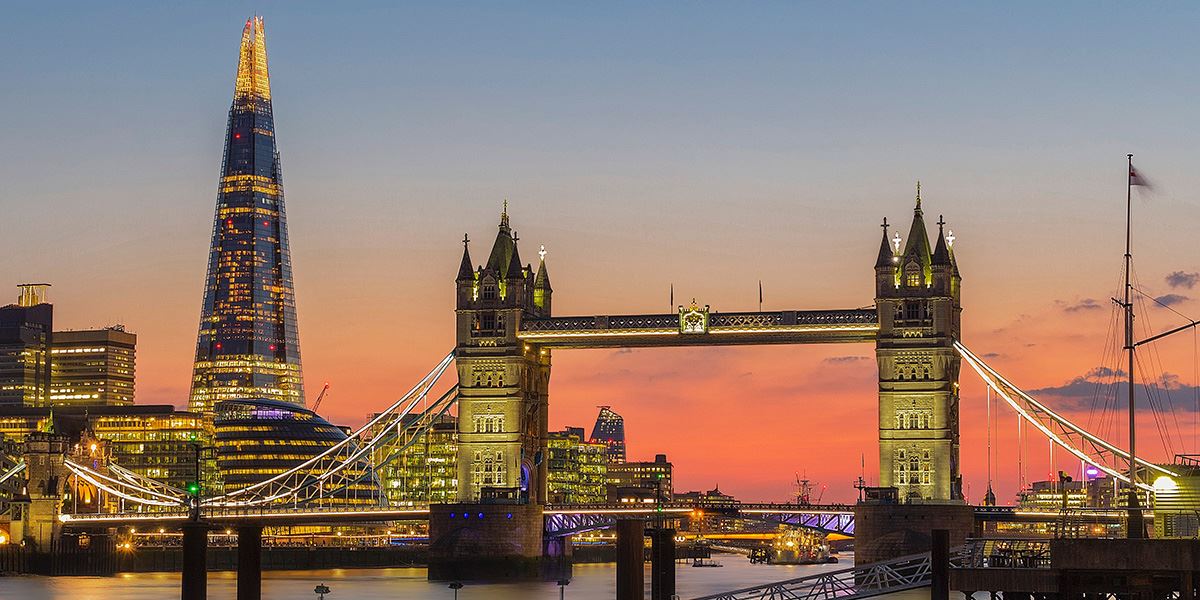 The Shard and Tower Bridge at sunset

What’s your favourite London night out?
That would have to be Ronnie Scott’s in Frith Street, Soho. We’ve been going there for a long time, taking in a different restaurant at some point in the evening. Dishoom and Hawksmoor restaurants in Covent Garden are favourites at the moment.

Favourite London pub?
Gordon’s in Villiers Street, although it’s more of a wine bar than a pub. It’s reputed to be the oldest wine bar in London, and it’s like walking into a Dickensian cave. It’s quaint and lovely, and there’s an excellent selection of wine and ports to choose from! They also do a wonderful cheese board.

What’s your favourite shop?
Selfridges and Harvey Nicks – mostly for the clothes and shoes!

If you could buy one building in London, which would it be?
Tricky one! If I had to choose one, it would be the Supreme Court Building in Parliament Square. It’s an iconic, ornate building – the stonework is just beautiful. I could see myself living there!