Here is our guide to some of the must-see attractions across the UK and Ireland to help you plan a fun filled family day out this school holiday break. From magnificent castles to inspiring zoos, fascinating museums to exciting theme parks, there's something for everyone!

Kelvingrove Art Gallery & Museum is one of Scotland’s most popular free attractions. It has been a favourite with Glasgow residents and visitors since it opened in 1901.

The museum has 22 themed galleries displaying an astonishing 8000 objects, brought together from across Glasgow Museums’ rich and varied collection, which is a Recognised Collection of National Significance. The displays are extensive and wide-ranging, these include the Dutch Old Masters, French Impressionists, Scottish art, Salvador Dali’s Christ of St John of the Cross, natural history, arms and armour, ancient Egypt, Scottish history and archaeology and world cultures.

The sight of an elephant shackled behind bars and forced to ring a bell to beg for food so shocked a nine year old boy that he vowed to build a zoo without bars. It was 1903 and the boy – the remarkable George Mottershead – was already collecting insects, lizards and spiders which arrived in packages of plants from around the world at his father’s Cheshire nursery.

By 1930 he had acquired land and begun the animal collection which has grown into one of the top zoos in the world and a leader in conservation of endangered species. Visitors should set aside a whole day to visit Chester Zoo’s 20,000 animals, 500 different species, in 125 acres of land. And it’s definitely worth a visit to the zoo’s recently opened £40m exotic Islands project, a recreation of the islands of the Philippines, Papua New Guinea, Bali, Sumatra, Sumba and Sulawesi. 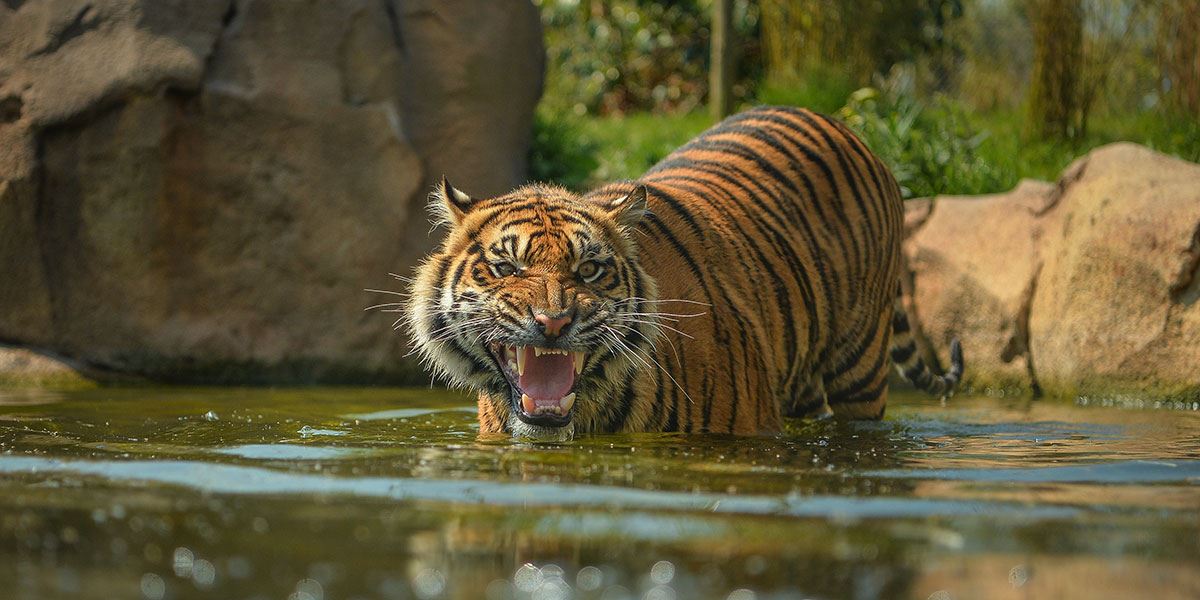 The beautiful Jaya, a Sumatran tiger in Chester Zoo

Edinburgh Castle is a proud and majestic symbol of Scotland, famous the world over. Perched on an extinct volcano, this instantly recognisable fortress is a powerful national symbol and part of Old and New Towns of Edinburgh World Heritage Site. Its story is Scotland’s story. From the One O’Clock Gun and Mons Meg to the Honours of Scotland and the Stone of Destiny, there is a lot to see at this magnificent property. Visitors to Edinburgh Castle can also follow in royalty’s footsteps in the chamber where Mary Queen of Scots gave birth and the Great Hall, where monarchs feasted.

The Tower of London

The Crown Jewels are not the only reason to visit the Tower of London, this 11th-century fortress is a fantastic day out whatever your interests might be and is one of the country’s finest historical attractions. Spanning a triumphant 1,000 years of history, the tower has so much going on that you can easily spend a whole day here. Make sure you join one of the tours led by the Yeoman Warders (popularly known as Beefeaters) and you’ll hear entertaining tales of intrigue, imprisonment, execution, torture and more.

The tours begin every 30 minutes, last approximately an hour and are included in the entry price. Another big draw to the tower is the Royal Armouries’ exhibition in the White Tower, with swords, armour, morning stars (spiky maces) and other gruesome tools for separating human beings from their body parts. For younger children, there are swordsmanship games and coin-minting activities. 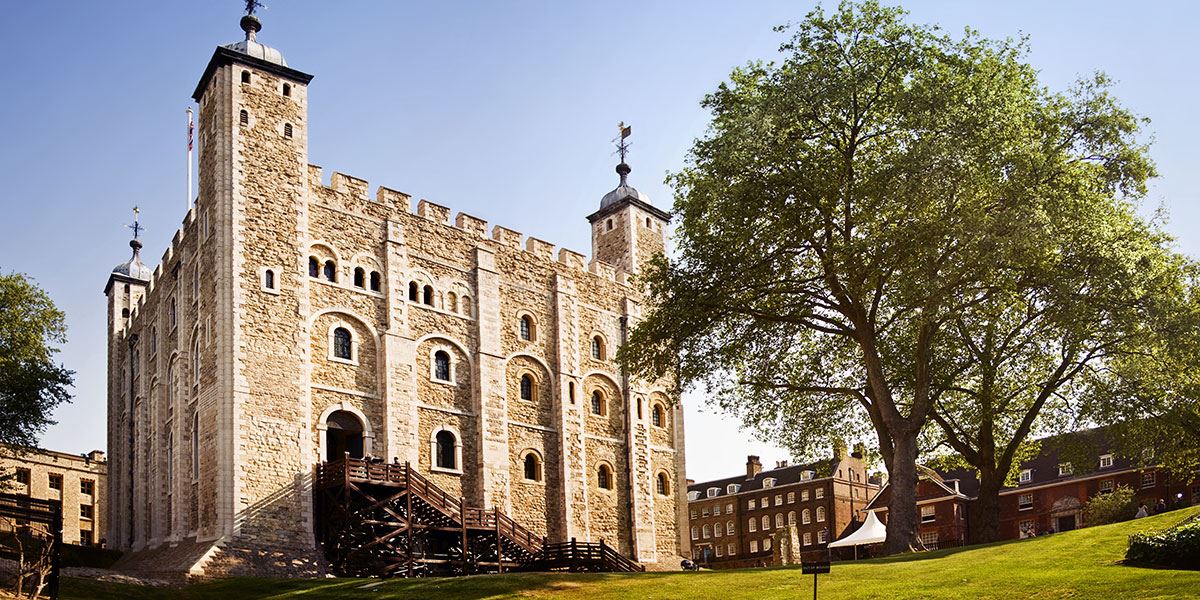 Cardiff owes it existence as a major centre to the discovery of coal. In the heyday of ‘black gold’, as it was known, Cardiff exported millions of tons of coal annually – making it the world’s most important coal exporting port.

One of the main beneficiaries of the coal boom was the Bute family – then owners of Cardiff Castle. The 3rd Marquess of Bute was reputed to be as rich as the incumbent monarch, Queen Victoria – making him the Bill Gates of his day in financial terms. He spent much of his new-found disposable income commissioning the renowned architect William Burges to oversee the lavish renovation of Cardiff Castle.

Within the castle’s tall Gothic towers, no expense was spared in the opulent refurbishment of the apartments. Precious stones, gilding, marble, elaborate carvings, Mediterranean rooftop gardens all combined to create the ultimate fantasy makeover – the bling of its day. A tour of the castle, one of the most popular attractions in Wales, reveals in no uncertain terms how the upper crust lived in the late 19th century.

The Eden Project is nestled in a huge crater. Here, massive Biomes housing the largest rainforest in captivity, stunning plants, exhibitions and stories serve as a backdrop to striking gardens, concerts and exciting family events.

It’s already Cornwall’s most visited attraction, and is a family-friendly attraction which is suitable for visitors all ages. The tranquil gardens are the perfect place to enjoy a peaceful stroll with friends before indulging in a cream tea in the Eden Coffee House or an authentic Mediterranean lunch in the Med Terrace Restaurant. And there are plenty of play areas and activities to keep the kids entertained too. 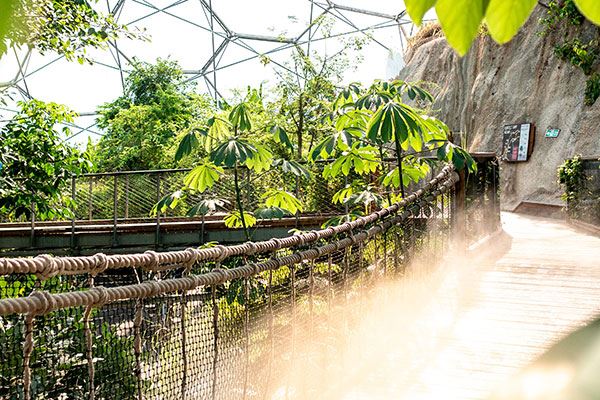 Go inside the incredible Biomes at the Eden Project 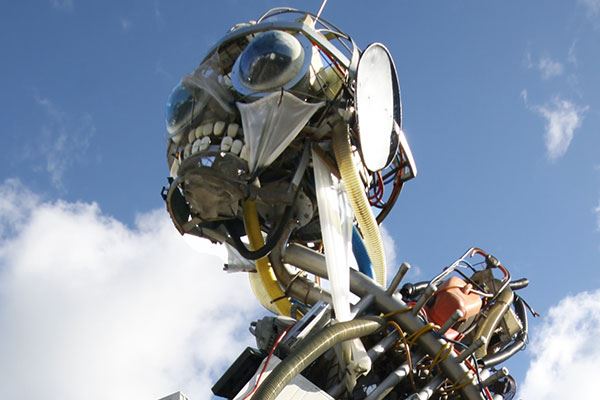 The Eden Project is the perfect family day out

The city of Durham – described by best-selling author Bill Bryon as “perfect” – is one of the country’s finest cultural and historical destinations, with winding streets rising to a peninsula topped by the magnificent cathedral and castle. The site, protected by the serpent-like coil of the River Wear, was one of the first to be granted World Heritage status.

Work on the Cathedral, which has free entry, began in 1093 and it is now renowned as one of the finest surviving examples of Romanesque architecture. It is also culturally significant as the burial place of St Cuthbert and the Venerable Bede, author of the first English history. Visited by 700,000 people a year, it has been voted Britain’s best building. The castle, which is home to university students, is also open to the public for guided tours.

The Giant’s Causeway is Ulster’s greatest prehistoric marvel. As you go down the series of basalt rock steps, you’re experiencing geological evolution that dates back 60 million years. But legend says it was built by legendary Ulster giant Finn Macool. Whichever, the only Irish UNESCO World Heritage Site is magnificent – and there’s a cafe and visitor centre. 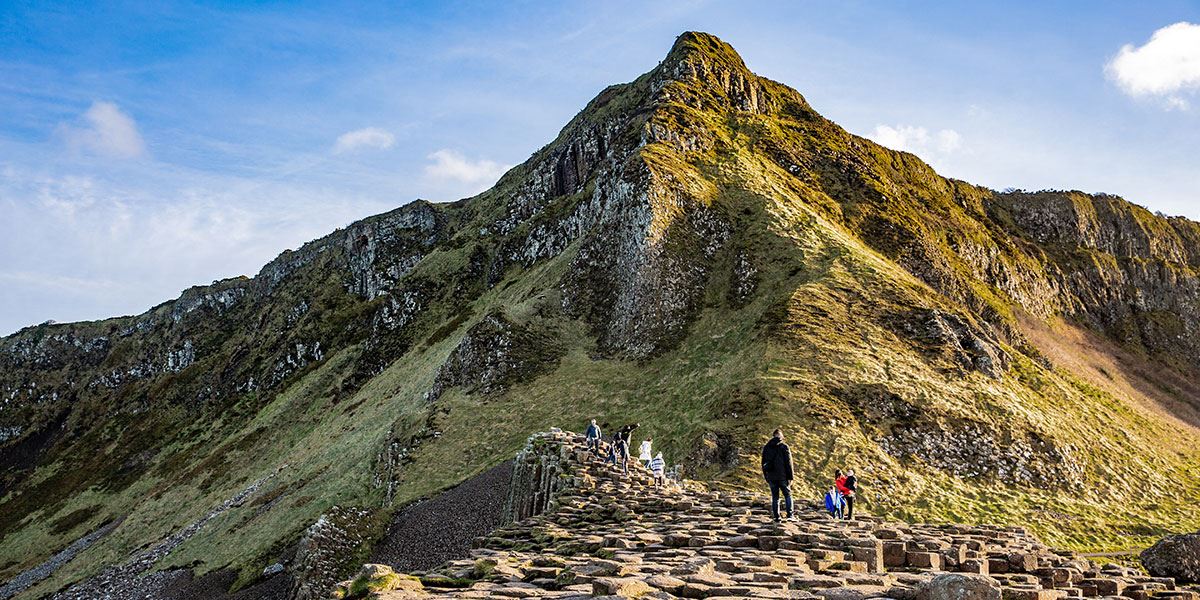 Step back in time with a visit to the Giant’s Causeway, County Antrim

Hadrian’s Wall is one of the country’s most revealing and dramatic Roman ruins, its 2000-year-old procession of abandoned forts, garrisons, towers and milecastles marching across the wild and lonely landscape of northern England

This wall was about defence and control, but this edge-of-empire barrier also symbolised the boundary of civilised order – to the north lay the unruly land of the marauding Celts, while to the south was the Roman world of orderly taxpaying, underfloor heating and bathrooms.

Thanks to the natural hot springs that bubble to the surface, the Romans built a health resort in Bath.

The waters were rediscovered in the 18th century, and Bath became the place to see and be seen by British high society. Today, the stunning Georgian architecture of grand town houses and sweeping crescents (not to mention Roman remains, a beautiful cathedral and a cutting-edge 21st-century spa) means Bath demands your undivided attention. 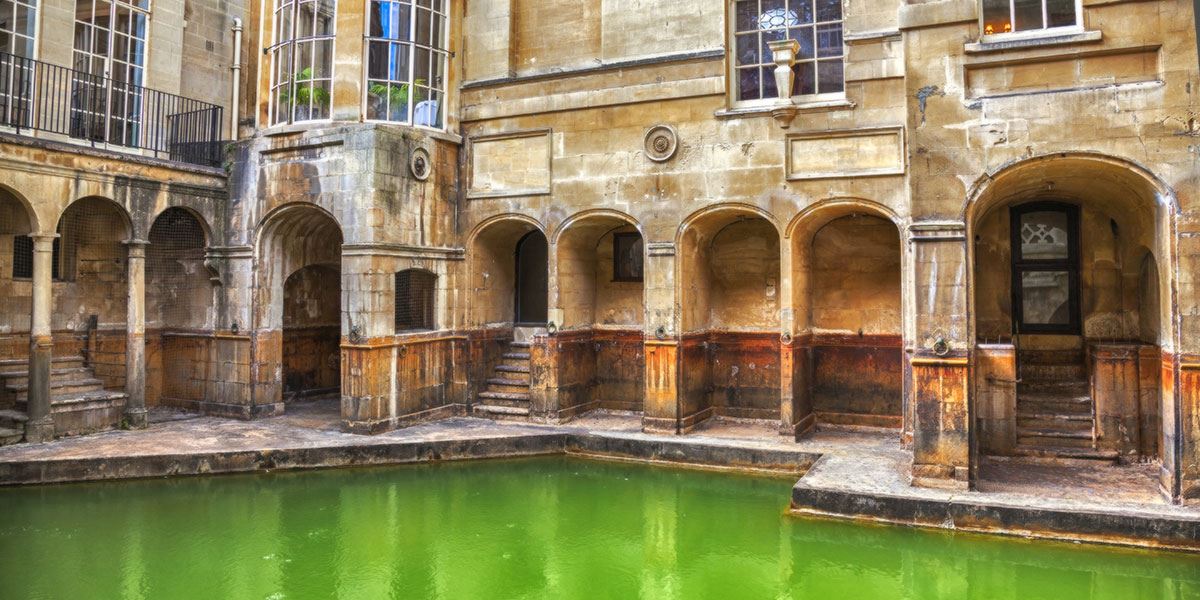 Discover 2,000 years of history at the Roman Baths in Bath

Mysterious and compelling, Stonehenge is Britain’s most iconic ancient site and one of the most visited attractions. People have been drawn to this myth-laden ring of bluestones for the last 5000 years, and we still don’t know quite why it was built. Research showcased at Stonehenge reveals that prehistoric people brought animals to the site from as far afield as North East Scotland, more than 500 miles away, to take part in midwinter feasts.

As one of the world’s oldest museums, having first opened in 1759, The British Museum’s collections comprise millions of objects, so vast that only a fraction can be put on public display at any one time. The London museum has 10 curatorial and research departments covering geographical regions, periods of time and types of artefacts, but the most famous of its exhibits are undoubtedly the Egyptian mummies, the Rosetta Stone and the Anglo-Saxon ship burial from Sutton Hoo, Suffolk – one of the most spectacular and important discoveries in British archaeology.

The various short-term exhibitions mean there’s always something different to see at the British Museum, no matter how many times you may have visited. However, there are also a number of permanent exhibitions on display including the Enlightenment Gallery, which features around 5,000 objects chosen to cast light on the period when the British Museum was founded by an Act of Parliament. It is displayed in the restored former King’s Library, a huge neo-classical room built in the 1820s to house the books collected by George III. 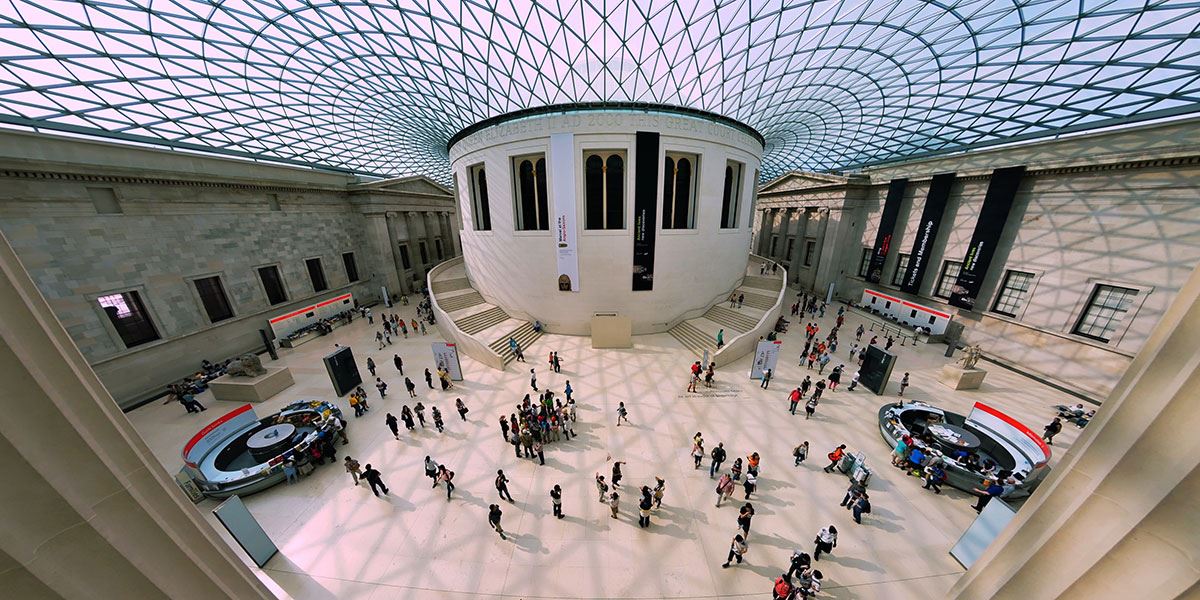 Take a look at the fantastic artefacts in the British Museum, London

Alton Towers, one of the most popular attractions in the country. Located in the Staffordshire Moorlands near the village of Alton, the park combines major white-knuckle rollercoasters like Nemesis and Oblivion with the calmer charms of pre-school favourite CBeebies Land. The park is built on the former estate belonging to now ruined Alton Towers stately home, which today contains a terrifying “walk-through dark ride” based on a local legend. Queues are long throughout the park at peak times so try to go mid-week if possible, and if it all gets too much, enjoy a stroll.