With such contrasting landscape – and so much of it – it’s no surprise that walking is hugely popular in Somerset. Whether you’re looking for a well-trodden leisurely ramble or some seriously challenging wilderness, there are walks to suit your needs.

The South West Coast Path National Trail has something for everyone. Voted the nation’s best walking route by Walk magazine, it covers all 630 miles of the South West peninsula, running west from Minehead to Poole Harbour. You can now go east from Minehead to Brean on a newly-opened 58-mile stretch of the ambitious National Coast Path. Walk on stunning coastal scenery that has never been opened to the public before. Another coastal walk, The Coleridge Way, follows in the footsteps of the Romantic poets resident here in the 18th century.

The 51-mile walk goes from Nether Stowey at the foot of the Quantocks to Lynmouth, where you can link with the South West Coast Path. With 6,000km of public rights of way, seven miles of sandy beaches and many quiet roads, you will find a walk to suit you. It’s also one of the most dog-friendly places in the UK. 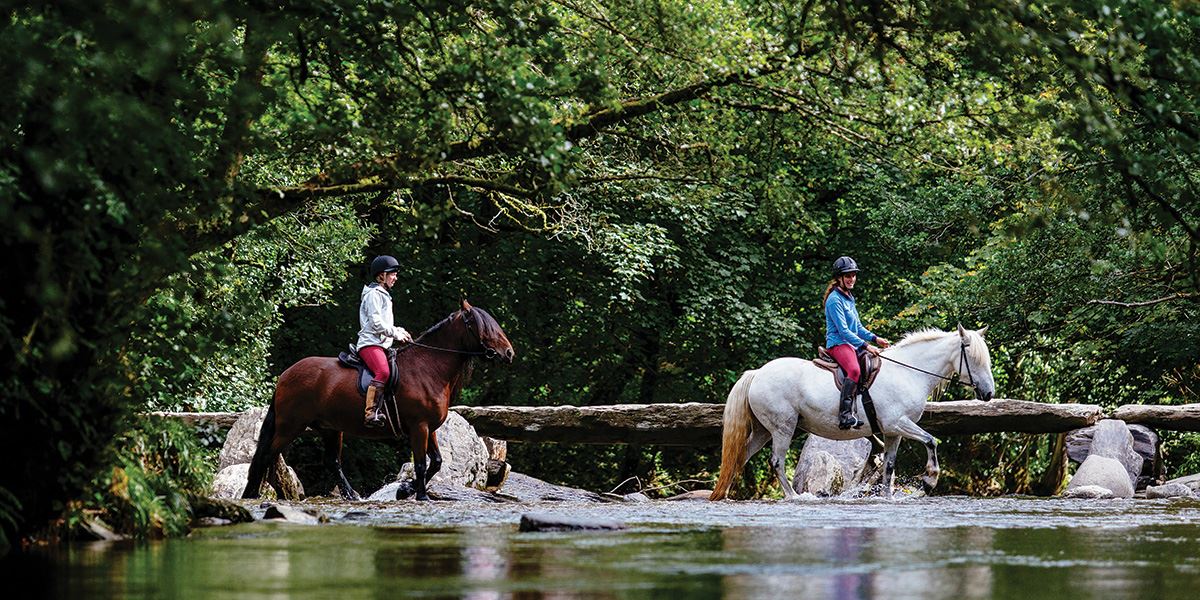 Horseriding through the River Barle

Cyclists are well catered for, too. Somerset’s huge expanse of rolling hills and flat plains will satisfy both leisurely peddlers and off-roaders. The better-known routes are the South Somerset Cycle Route, the Stop Way Line, Colliers Way and the Strawberry Line, which follows an old railway line.

Somerset’s rugged landscape is perfectly suited to horse riding, too. Quantock Trekking offers treks to suit all ages and abilities, with half and full days or even a group holiday in their Bashford Lodge, which sleeps four to six. Evening rides are a great way to take in the clear skies of Somerset.

With so much coastline, water enthusiasts have plenty of choices, too. Somerset Adventures offers many ways to explore the area. Try raft building, coasteering, kayaking or caving. Channel Adventure in Minehead offers windsurfing, canoeing and raft building among other adventures. Take a whole day with them to explore the coastline from the water. If you’re lucky you might even spot a harbour porpoise. Discover Paddling in nearby Bristol, offers a family-orientated kayaking school for beginners.

Fancy going higher? Cheddar Gorge and Caves is an international centre for Rocksport which includes adventure activities rock climbing, caving and the Black Cat Free Fall. You can push the limits, too, at Mendip Outdoor Pursuits on the top of the Mendips. Established in 1978 and set in 250 acres, this is one of the biggest outdoor pursuits centres in the south west, it even has a snowsport centre. 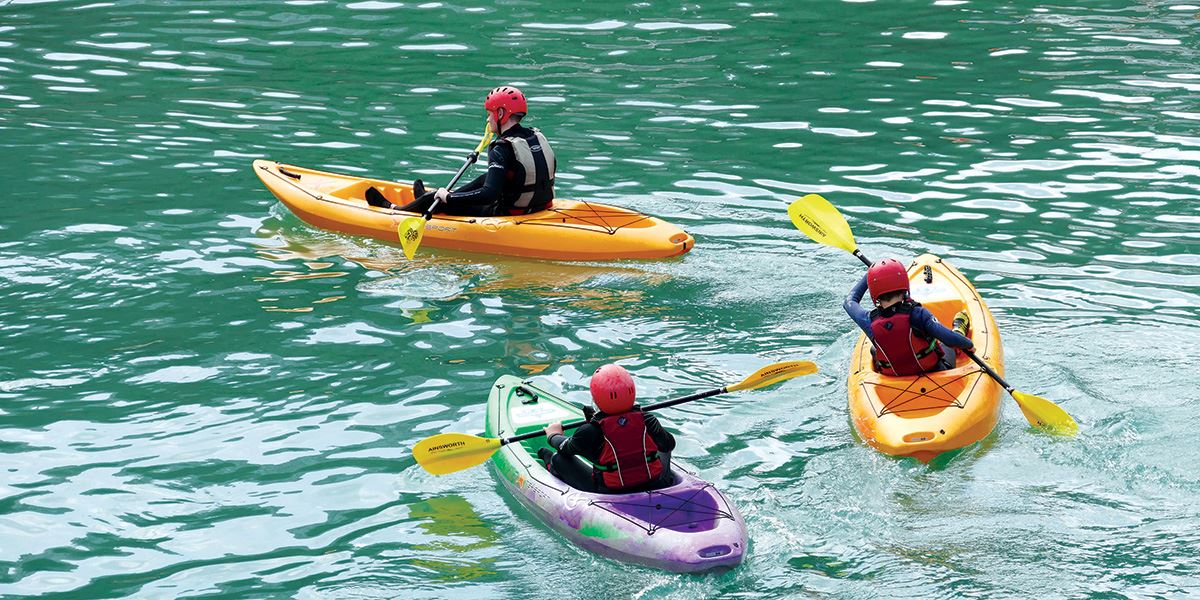 Take to the water in Somerset

If you fancy going even higher, Aerosaurus Balloons offers three to four hour Champagne balloon flights from its base in Taunton and Castle Cary. Get a true view of the magnificence of the Somerset countryside. Talking of bird’s eye views, Somerset is considered one of the best places in the UK for bird watching, especially booming bitterns and the spectacle of starling murmurations at the internationally-important Somerset Levels.

For a quieter day out, golfers should head for one of Somerset’s 40 golf clubs. The ‘must play’ courses, with stunning scenery are at Burnham & Berrow on the coast and Enmore Park on the Quantock Hills. Both are championship golf courses. Enmore’s 18-hole 71 par course welcomes visitors, while Burnham & Berrow’s two courses are ranked 31st in Golf Monthly’s Top 100 golf courses in the UK and Ireland, having played host to more than 40 major amateur championships.

Cheddar Gorge and Caves is an international centre for Rocksport which includes adventure activities rock climbing, caving and the Black Cat Free Fall

For top-flight spectator sport, head to Taunton. The first-class county club is home to former captain, Marcus Trescothick, who holds the record for the fastest half-century in English Twenty20 cricket. Former international players included Joel Garner, Viv Richards and Ian Botham. The ground was a venue for South Africa’s 2017 tour of England, and in 2019 hosted three matches of the Men’s ICC World Cup.

Football fans are well catered for, too, in the shape of Yeovil Town FC. Previously famous for being one of the most successful non-league teams in the FA Cup, the ‘Glovers’ entered the league in 2003, and play at Huish Park in the town. Unfortunately, The Glovers were relegated back to the National League in 2019.

For superb National Hunt racing, Somerset boasts two thoroughbred courses, at Taunton and Wincanton. The highly-popular Taunton course is England’s youngest jumps racecourse, while Wincanton has been voted the Racegoers Club best small racecourse in the South West and Wales for the past 12 years. 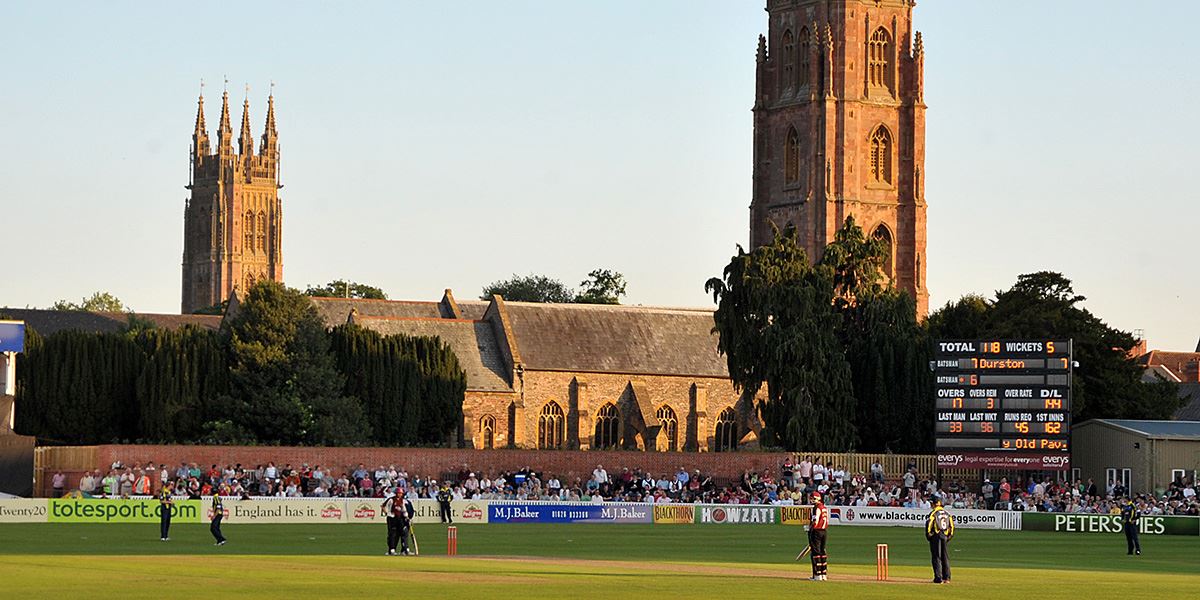 There’s plenty of entertainment for children, too. Somerset’s leisure parks include Brean Leisure, a great day’s adventure for the kids, including a theme park with more than 40 hair-raising rides and Brean Splash Waterpark. In Street, the Greenbank outdoor heated pool is a great way to relax, even on cloudy day. There is a 30 x 12m main pool, a smaller children’s pool and a splash area. Spacious lawns allow for sunbathing, too.