When it comes to sport, London is high up in the league tables; its stadiums, grounds and arenas are world-renowned, it’s home to more professional football teams than any other city in the world and it was the first city to host the Olympics three times – in 1908, 1948 and 2012.

Football is no doubt London’s most popular sport, with 13 professional teams in the city including England’s national team. Wembley Stadium – England’s home ground – is the largest venue in the capital with 90,000 seats.

The most striking feature of this stadium is its 133-metre tall, steel arch, which sits above the north stand and makes it possible for the roof over the south stand to retract, allowing light and air onto the pitch. At 315 metres long it’s the longest single roof structure in the world and is visible across London and beyond.

If there are no games or events taking place while you’re here, then why not follow in the footsteps of legends by taking a tour of the stadium? You can get access to some of Wembley’s historical treasures, such as the 1966 World Cup crossbar, the Jules Rimet Trophy commemorating England’s World Cup glory and the original flag from the 1948 Olympic Games, which were also held at the stadium. You’ll also get to sit inside the England changing rooms, take Gareth Southgate’s hot-seat in the press room, experience the tension of the players tunnel and even get your hands on the FA Cup.

Of course, there are also seven Premiership football team grounds in London, too, including Arsenal, Chelsea, Tottenham Hotspur and West Ham, most of which offer behind the scenes tours to enable fans to get their fix. 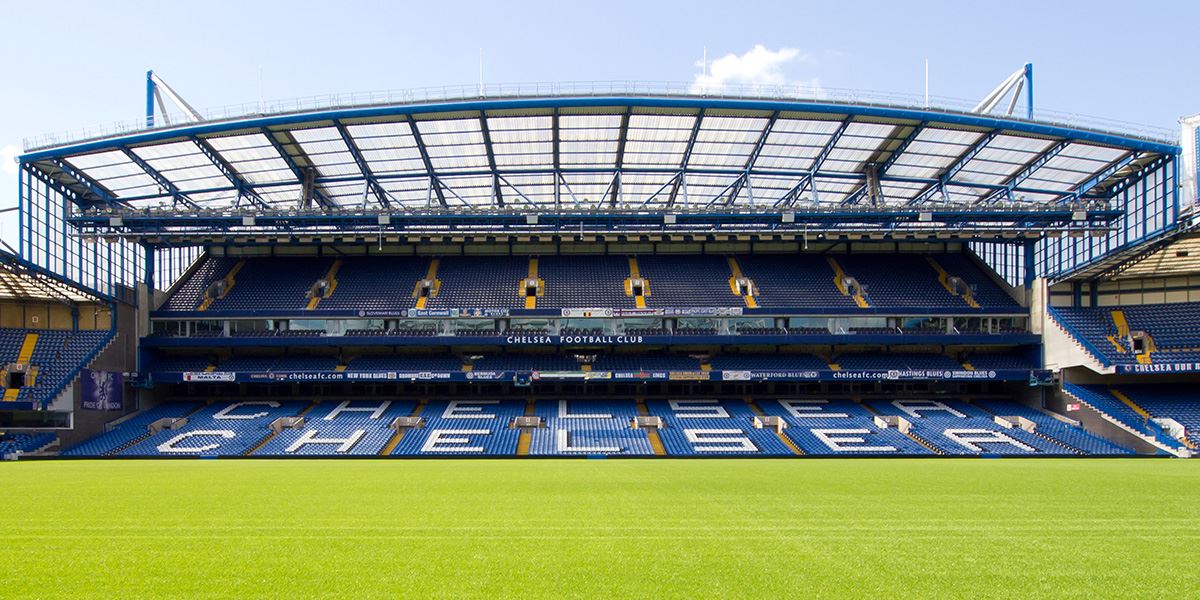 While football is a firm favourite, rugby has seen a surge in popularity in recent years with both League and Union codes played in London. The capital boasts a healthy number of domestic teams including London Broncos, London Irish, Harlequins and Saracens, although you may have to travel out of London to watch them play as most of their home matches are played at stadiums on the outskirts of the city and in the surrounding home counties.

Each spring, however, Harlequins and Saracens host a premiership rugby clash at Wembley Stadium, which attracts record-breaking crowds with a large number of tickets sold at dirt-cheap prices for an affordable family day out.

Cricket is very well organised and established in London and is the second most popular sport after football. There are two major cricket grounds here; Lord’s, in St John’s Wood near Regent’s Park, is one of the most famous in the world and is home to Middlesex County Cricket Club, while The Oval, in Kennington, south London, is home to Surrey County Cricket Club and witnessed England’s Ashes win of 2005.

If you’re not in London during the cricket season, which runs from April to September, then you can still take a guided tour at Lord’s to see the Grade 2-listed pavilion and legendary Long Room, sit on the seats usually occupied by the England team, soak up the award-winning architecture of the J.P. Morgan Media Centre and view the iconic Ashes urn.

Wembley Stadium – England’s home ground – is the largest venue in the capital with 90,000 seats

Thanks to London winning the bid to host the Olympics in 2012, the city has a host of relatively new sporting arenas and facilities across the city. Since then, The Olympic Park, where most of the action took place during the Games, has been transformed into Queen Elizabeth Olympic Park, where five of the venues remain; the Stadium, Aquatics Centre, Lee Valley VeloPark, Copper Box and Lee Valley Hockey and Tennis Centre. The Olympic Stadium hosted the opening and closing ceremonies of the London Games, as well as the athletics and paralympic athletics, and is now home to West Ham United Football Club having been transformed into a UEFA Category 4 venue with 54,000 seats.

The Copper Box, which hosted the Handball, Modern Pentathlon Fencing and Paralympic Goalball during the games was the first venue to reopen to the public and now houses a gym and state-of-the-art sports hall. It’s also home to the London Lions basketball team and is a major venue for everything from premiership basketball to pop concerts.

The dramatic moment that Chris Hoy won gold in the Keirin and then again in the Team Sprint event took place in the Lee Valley VeloPark. This striking indoor velodrome is the fastest track in the world but everyone, from beginners to elite riders, are able to ride it. 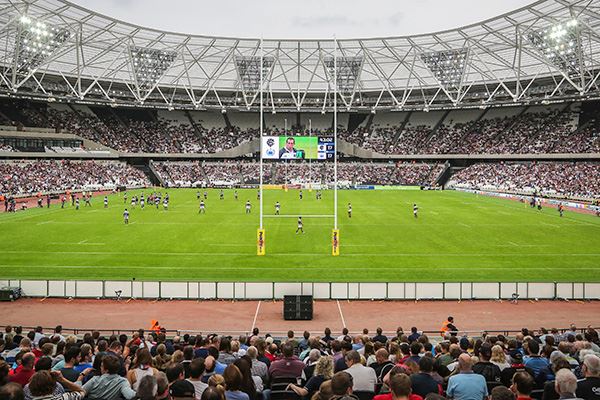 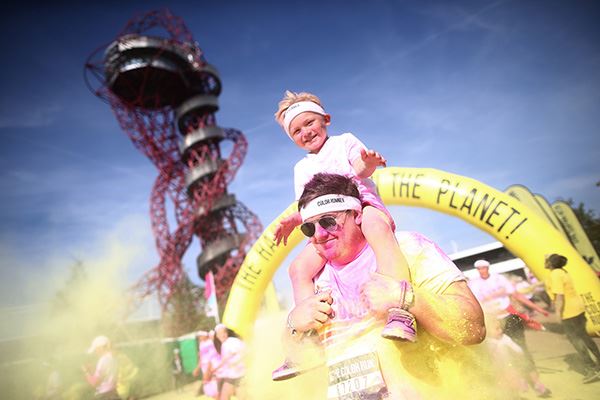 From cycling on the same track that Team GB won gold seven times during the Games, to exploring five miles of mountain bike trails, getting pumped on the BMX track or speeding around the one mile road circuit, the VeloPark caters for every type of cyclist and taster sessions are available for those who just want to give it a try.

Also at Lee Valley, you’ll find a hockey and tennis centre, the state-of-the-art athletics venue that trained gold medalists like Greg Rutherford and Jonnie Peacock for London 2012 and a riding centre with an indoor arena and two floodlit outdoor arenas. Queen Elizabeth Park is also home to the London Aquatics Centre, which in April 2016 hosted the LEN European Aquatics after a 78-year break from London.

And then there’s the ArcelorMittal Orbit – Britain’s tallest sculpture at 114.5 metres, and acclaimed landmark of the park. Situated next to the Olympic Stadium, the structure has two viewing platforms giving unrivalled views of London from the east and now features a huge helter-skelter-style slide – the world’s tallest tunnel slide – which is also open to the public.

Thanks to London winning the bid to host the Olympics in 2012, the city has a host of relatively new sporting arenas and facilities across the city

While the 2012 Olympics has brought a new appetite for sport to the city – particularly athletics – London’s most famous running race, the London Marathon, is decades old and has become a sporting institution since it was introduced to the capital by former Olympic athlete Chris Brasher 35 years ago.

Each April approximately 36,000 people run the 26.2-mile route through the streets of London (many in outrageous fancy dress) and in turn raise thousands of pounds for charity. Described as a “historical jog around London” by the organisers, the route takes in some of London’s most iconic landmarks; the first half of the route runs just south of the Thames through Greenwich and Blackheath before crossing the river at Tower Bridge, passing the Tower of London and London Eye and finishing on The Mall, in front of Buckingham Palace and next to St James’s Park.

The streets of London are lined with thousands of spectators on Marathon day; the most popular places to watch are the start line, halfway mark and, of course, the finish line so these can get quite busy but there is a downloadable map of the circuit on the marathon website page so you can plot your viewing spot, as well as a live tracking page so you can keep track of your favourite runner’s progress. 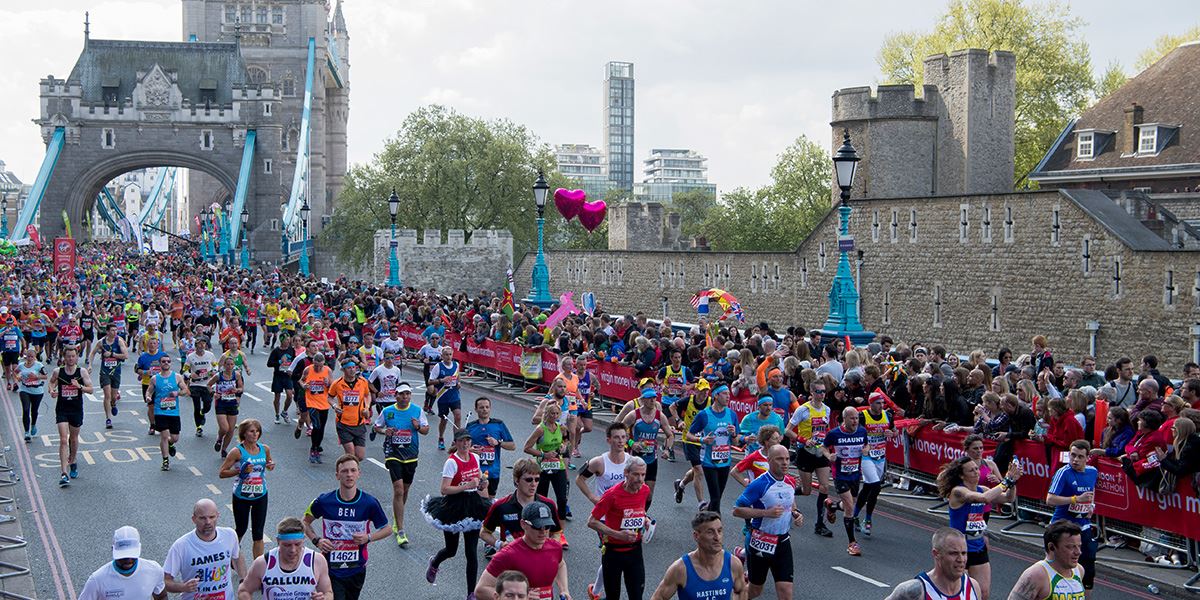 Back to ball games and, whether you’re a legitimate tennis fan or just in it for the Pimm’s, strawberries and cream, Wimbledon Tennis Championships are a must in the London calendar. For two weeks at the end of June/beginning of July this tantalising tennis tournament grips the city. But if you’re not lucky enough to win ballot tickets and cannot be bothered to queue, there are plenty of open-air big screens showing all the action across London.

Making the most of the river that slices through its centre, the Oxford and Cambridge University Boat Race has been held annually on the Thames since 1856 (with the exception of the First and Second World Wars). The race takes place every March on the Thames between Putney and Mortlake and there are plenty of places to cheer on the rowers along the route. The best spots, however, are Putney Bridge and Embankment near the start, Fulham Football Club’s home ground Craven Cottage, Hammersmith and Barnes for the mid-race action and Chiswick Bridge to see them cross the finishing line.

Each April approximately 36,000 people run the 26.2-mile route through the streets of London (many in outrageous fancy dress) and in turn raise thousands of pounds for charity

A more recent addition to London’s sporting calendar is Prudential’s RideLondon – a festival of cycling which takes place across the city and beyond each July as an annual legacy of the Olympics. The festival is made up of six cycling events which take place over one summer weekend.

RideLondon FreeCycle offers a great opportunity for people of all ages to experience the fun and freedom of cycling on traffic-free roads in central London and takes in many of the capital’s world-famous landmarks including the chance to cycle past Buckingham Palace, the Tower of London, the Houses of Parliament and St Paul’s Cathedral. In addition, there are six festival sites offering cycling-themed activities and, what’s more, it’s free to participate. 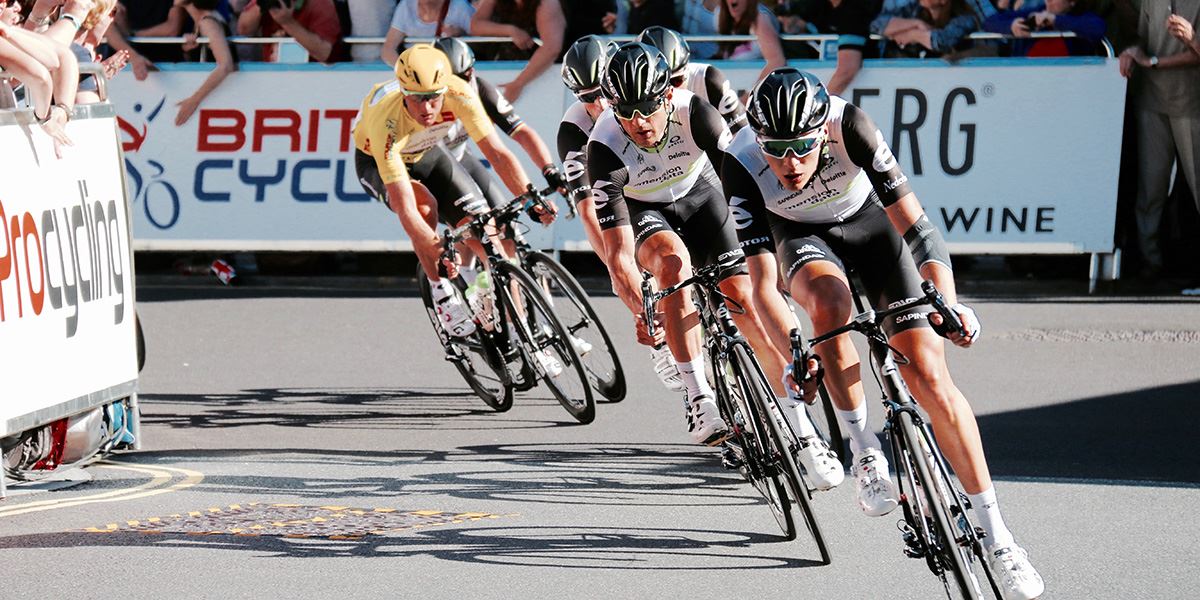 Every year, a number of cycle races take part in and around the city

Celebrating the legacy for cycling created by the London 2012 Olympic and Paralympic Games, the RideLondon-Surrey 100 is a challenge for amateur cyclists. Starting at Queen Elizabeth Olympic Park, it follows a 100-mile route on traffic-free roads through the capital and into Surrey’s stunning countryside. With leg-testing climbs and a route made famous by the world’s best cyclists at the Olympics, the challenge finishes – in style – on The Mall in front of Buckingham Palace.

Immediately after, RideLondon-Surrey 46 takes place, a slightly shorter route created specifically for newer and younger cyclists to take part. Entries for both London-Surrey races are by ballot only but are an incredible spectacle to watch, whether you want to stay in London and travel slightly further afield. The final race of the weekend is the RideLondon-Surrey Classic, which involves 150 of the world’s top cyclists from 25 teams taking on a 200km route through central London to the Surrey Hills and back, with a sprint finish on The Mall.

So whether you’re a football fanatic, crazy about cricket or tickled by tennis, London has no shortage of both indoor and outdoor sporting activities for all ages and abilities to enjoy, whether they want to take part or simply cheer participants on from the sidelines. The trick is to be prepared for everything the weather may throw at you and to do a little advance research to check that the activities you are planning are suitable for those travelling in your party. If you need some help or just want to find a local sports club or fitness class to attend, then check out the Get Active London website, which has information on all sorts of sporting activities across the city.