Discover our ancient buildings with a spooky past and visit some of the most haunted castles in the UK, with a look at the grisly history behind each one. You might witness Second World War soldiers walking by, glimpse the Grey Lady, hear a ghostly piper, or catch sight of the headless drummer… scroll down for more, if you dare!

Culzean Castle has a ghostly piper, who is reputed to have been searching caves beneath the castle when he disappeared. 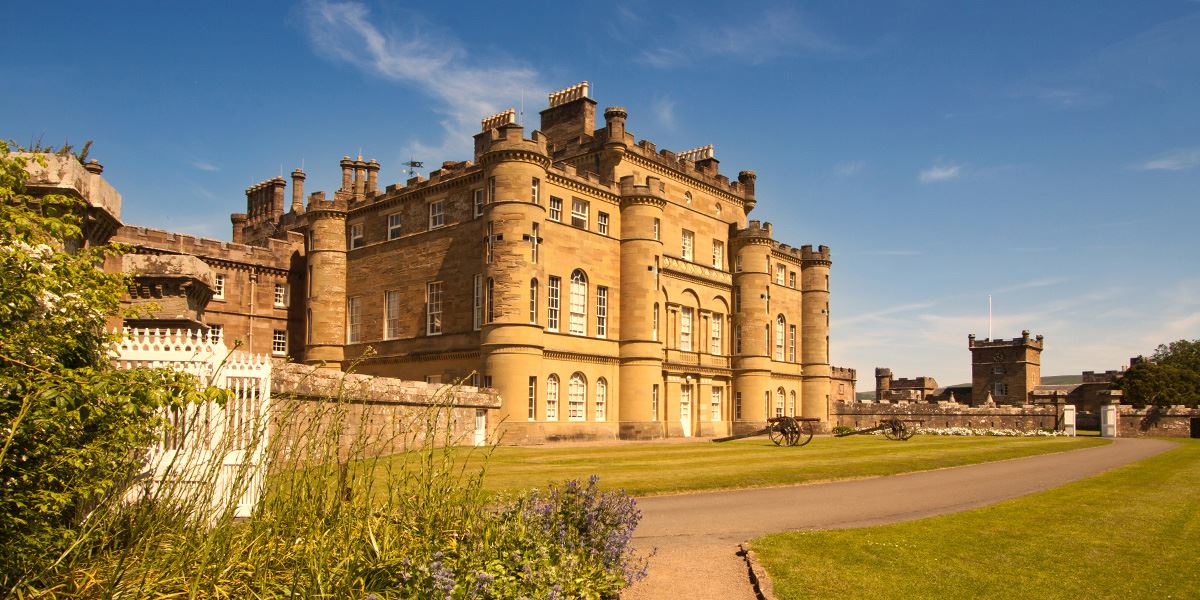 Culzean Castle is run by the National Trust for Scotland

The pipes are said to herald the announcement of a marriage, and also to be heard on stormy nights. His apparition is also said to have been seen in the grounds of the castle, both on Piper’s Brae and near the ruinous collegiate church.

Read more about Ayrshire and Arran

Edinburgh Castle is reputed to be one of the most haunted spots in Scotland and wherever you are in the city, you can’t escape its looming presence. And Edinburgh itself has been called the most haunted city in all of Europe. Communities are believed to have lived on the castle site since the 9th century, and there has been a Royal castle here since the time of David I in the 11th century. 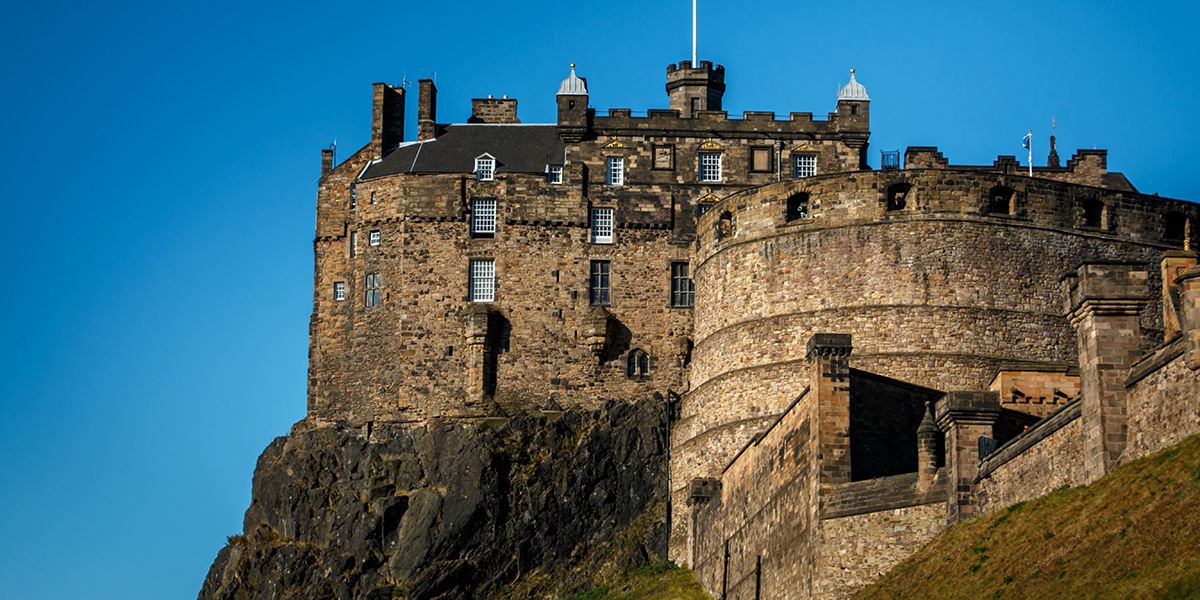 It has been the subject of many battles, sieges and sackings, despite the fact that its unique position afforded unparalleled protection. On various occasions, visitors to the castle have reported a phantom piper, a headless drummer, the spirits of French prisoners from the Seven Years War and colonial prisoners from the American Revolutionary War – even the ghost of a dog wandering in the grounds’ dog cemetery.

The Tower of London, London

The Tower of London is an 11th-century former royal residence and prison has seen centuries of death, destruction and torture, so it should come as no surprise that it’s one of the world’s most haunted castles. In 1536, Anne Boleyn, the second wife of Henry VIII, infamously lost her head here, and it’s said that her ghost strolls the castle grounds (with her head still intact). Also of note is the mysterious disappearance of the two princes, Edward V and his brother Richard, in 1483. 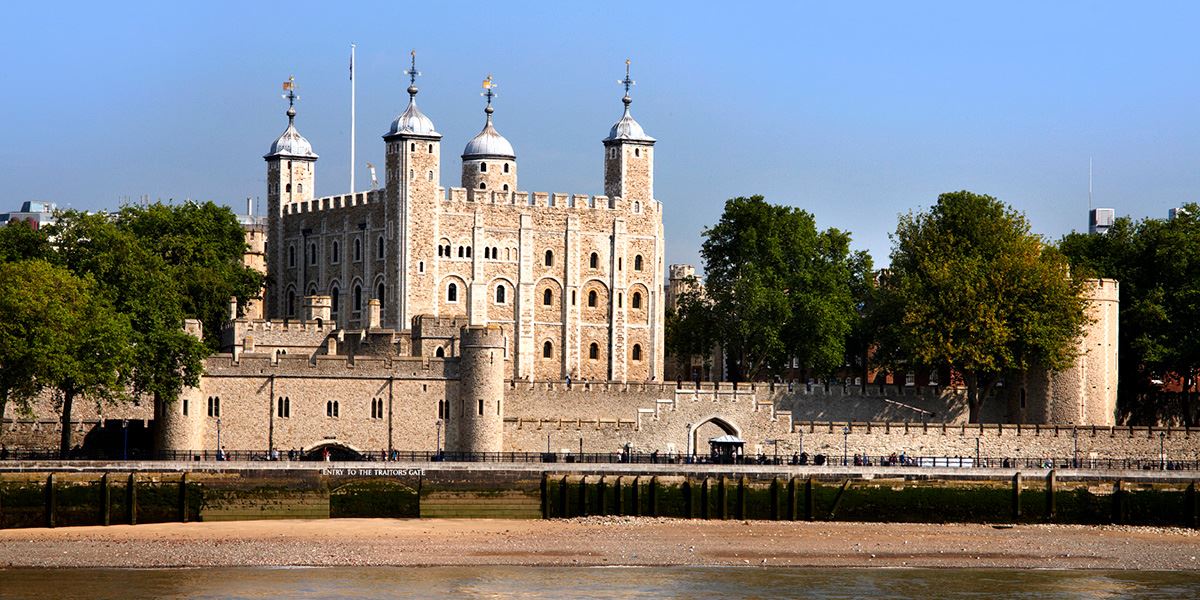 The Tower of London is now home to the Crown Jewels

It’s widely believed their uncle Richard III killed them as they stood in the way of his claim to the throne. They’ve been seen wondering the London Bloody Tower in nightgowns as well as playing on the grounds. Visitors to the Tower of London have even reported hearing their laughter echoing inside the palace walls.

Slains Castle is famous for providing inspiration for author Bram Stoker who visited the castle prior to beginning work on the immortal classic Dracula. It is a large imposing ruin fronting directly onto south-facing cliffs about a kilometre east of Cruden Bay. There are, confusingly, two Slains Castles on this stretch of coast. 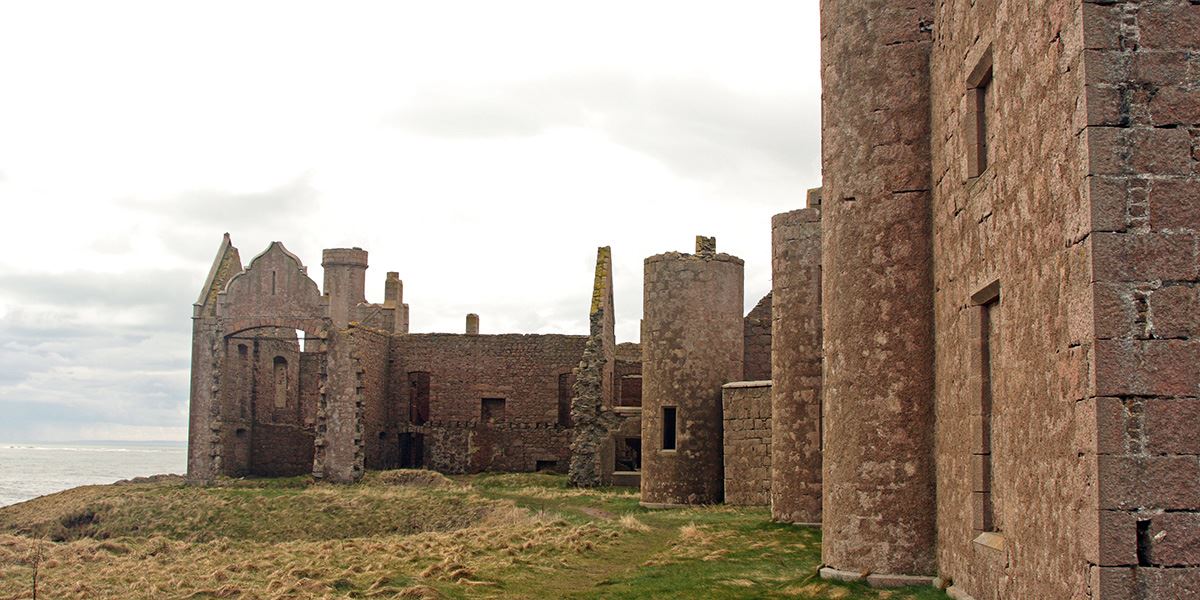 The original lay a mile north east of Collieston and about six miles south west of its successor. This was built in the 1200s as a fortress, but not much remains of it today. Witnessed ghosts at Slains Castle have included marching Second World War soldiers going past the castle and also a horse and carriage.

Chillingham Castle is a 13th-century, Grade 1-listed stronghold in Northumberland, famed for action and battles. With its fine rooms, gardens, lakes, fountains and tea rooms, the castle has an extraordinary ownership bloodline which runs back to the 1200s. 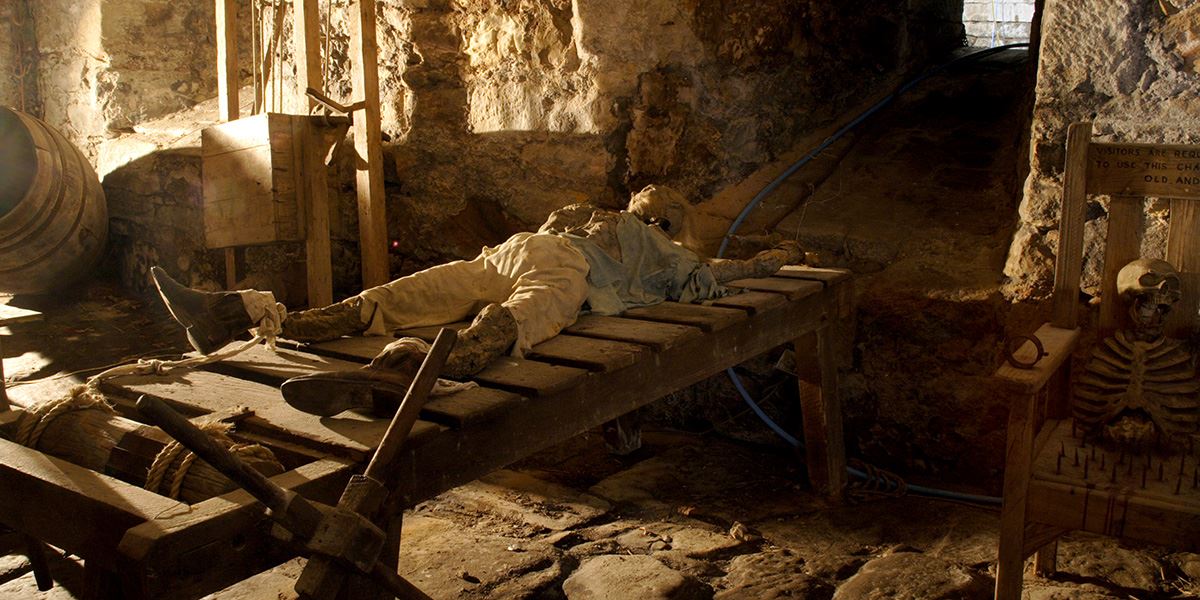 If you’re looking for a chilling experience, visitors should look out for the Torture Chamber and evening ghost tours are sure to entertain.

Stirling has its fair share of ghostly tales. The ‘Pink Lady’ is said to have been a noblewoman engaged to a brave knight who starved to death inside Stirling Castle during the Wars of Independence. She, in turn, died, not from malnourishment, but from the pain of a broken heart. 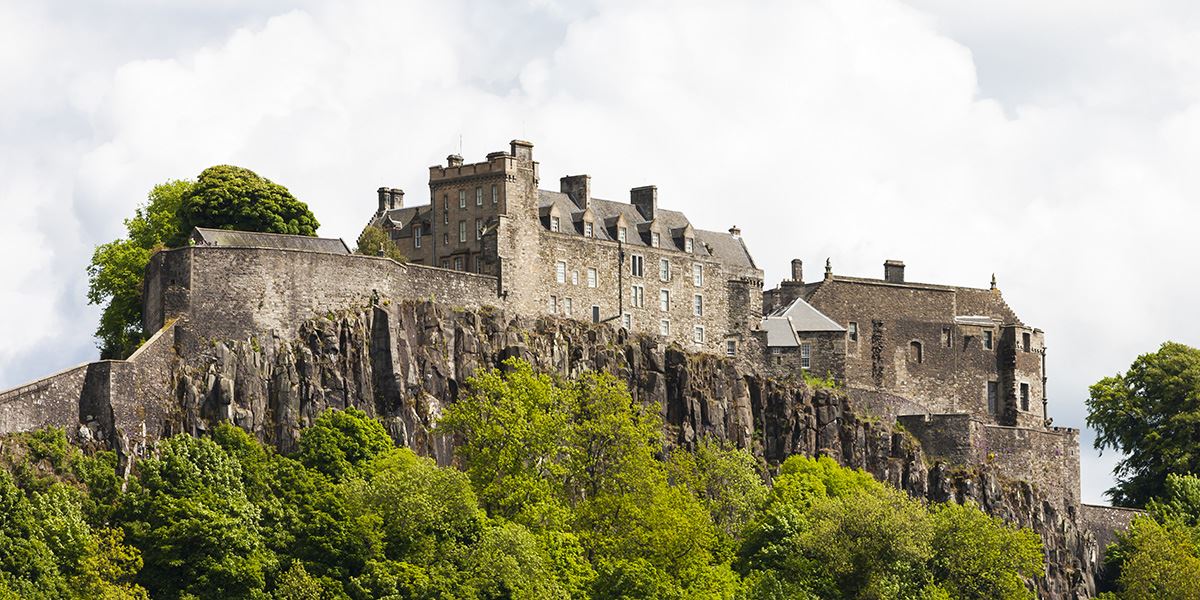 Her spirit roams the castle awaiting the day their souls will be entwined once more. The Stirling Ghostwalk tour offers drama and comedy on the city’s dark past.

Corfe Castle, a dramatic ruined fortress in southern Dorset, is associated with stories of murder, war and ghosts. One of the more grisly legends is that of the murder of an 18-year-old Anglo-Saxon heir to the throne, Edward the Martyr. The poor soul was slain in the grounds of the castle at the orders of his stepmother Queen Elfrida. 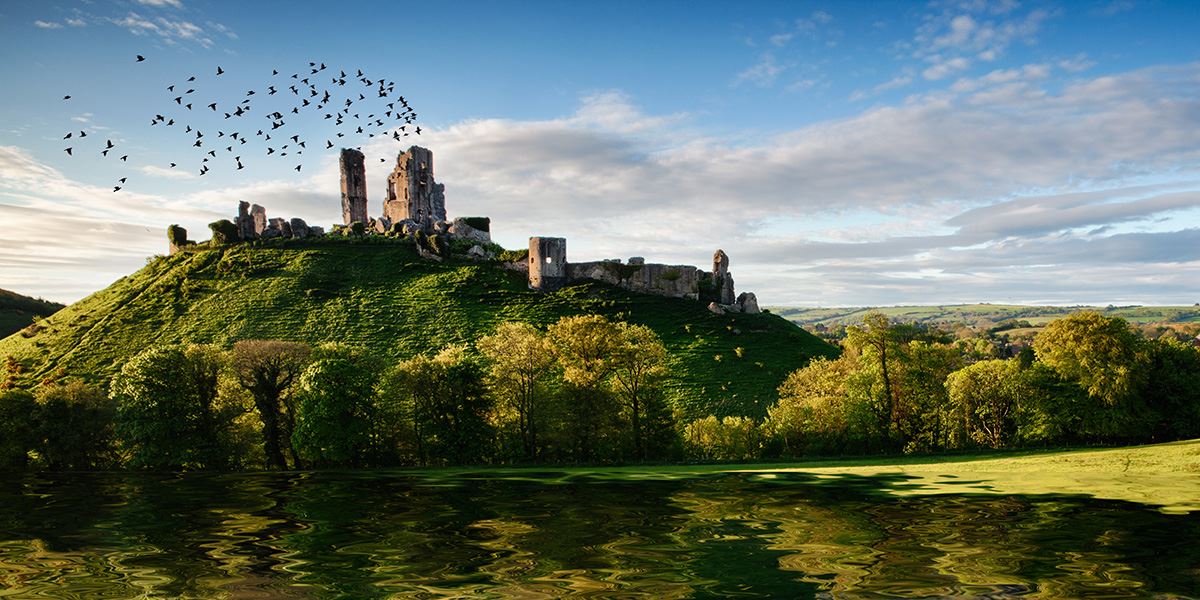 She wanted to bring about the succession of her own son, Ethelred, later known as ‘The Unready’. In the 13th century King John imprisoned 22 captured Frenchmen in the Corfe dungeons and left them to starve to death. While in 1327, Edward II was imprisoned at Corfe Castle prior to being murdered.

Glamis Castle has a long reputation as one of the most haunted castles in Scotland. King Malcolm II was murdered here leaving a bloodstain on the floor, which defied all efforts to be removed, and eventually the floor was boarded over. 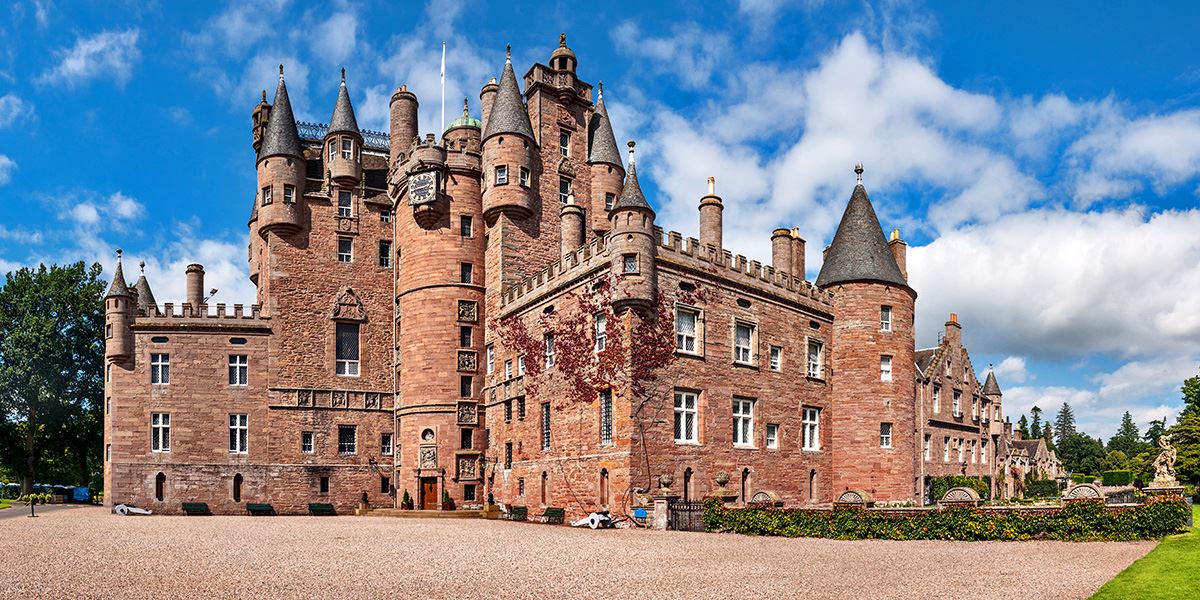 The castle is also said to contain secret rooms, one of which is believed to house a monster which roamed at night. A ghost named the ‘Grey Lady’ is also said to haunt the Chapel in Glamis Castle.

Visitors to Dover Castle have reported seeing the ‘lower half of a man’ walking through the doorway of the King’s bedchamber, while the ghost of a crying woman in a red dress has been spotted in the west stairway of the keep. There have also been sightings of a figure in blue in the mural gallery, although no one has been able to say whether it’s a man or a woman. 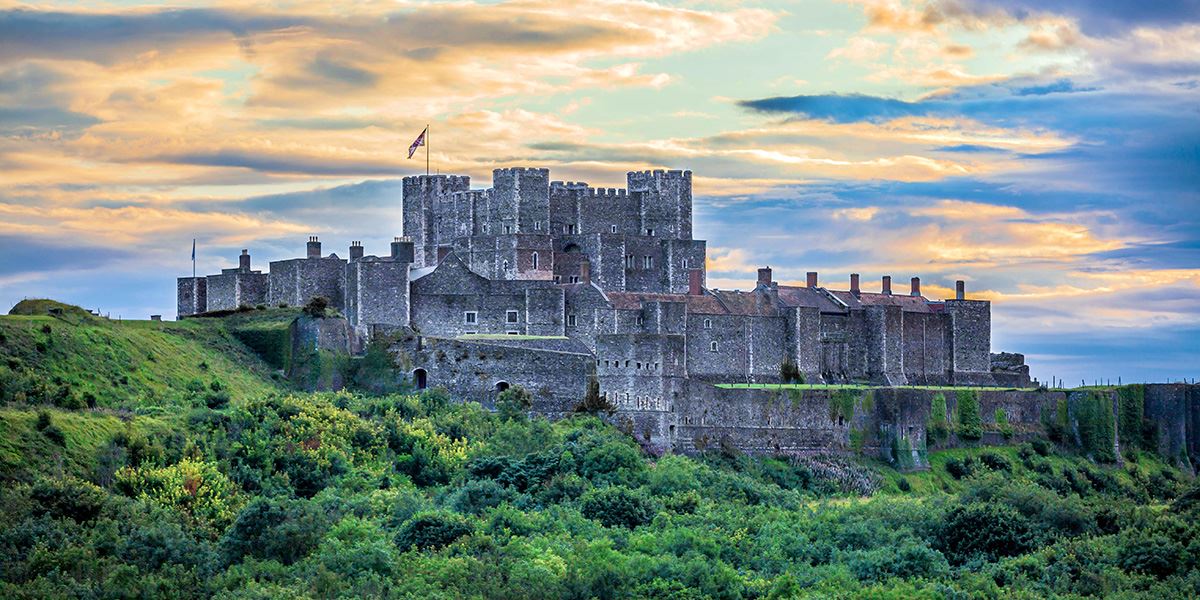 There have also been drumming sounds heard from the battlements and the figure of a headless boy. This is thought to be Sean Flynn, a young drummer boy who was attacked and beheaded by two soldiers for the money he was carrying while on an errand. There have also been many sightings of ghosts in the tunnels under the Kent castle.

Craig y Nos Castle in Powys is a Victorian Gothic castle is known as the most haunted castle in Wales. It is the former estate of acclaimed 19th-century opera singer, Adelina Patti – once one of the world’s most famous women. Numerous other TV shows have also filmed ghost tours at the castle – we do a number of different ghost-themed tours to suit all budgets as well as different styles of tours. All of the tours culminate at Halloween with a castle spectacular every October. The castle runs a sister site specially for any would-be or professional ghost hunters at mosthauntedcastle.com.