Some of the most gorgeous and cosy pubs in the UK, which are perfect as the nights draw in. Low oak beams, roaring fires and bags of history, you could spend hours holed up in these beautiful pubs. So here are a few of our favourites…

A quintessentially English Georgian inn, serving top-drawer food in a gloriously rural setting. A pilgrimage for foodies – the owners have their own smallholding with pigs, cows and hens. You can snuggle up in front of the roaring open fire with a newspaper, a pint and a home-made pork pie – the pub has oodles of rustic charm. Dogs (and humans with muddy boots) are very welcome.

This building started life as Blanchland Abbey in the 12th century when it was founded by Normandy monks. It later came under the ownership of Nathaniel Crewe, the influential 17th-century Bishop of Durham. After his death in 1721, it was named The Lord Crewe Arms in his honour and served as the village pub. It has a brilliant open fire to keep those winter chills at bay and offers excellent cuisine. 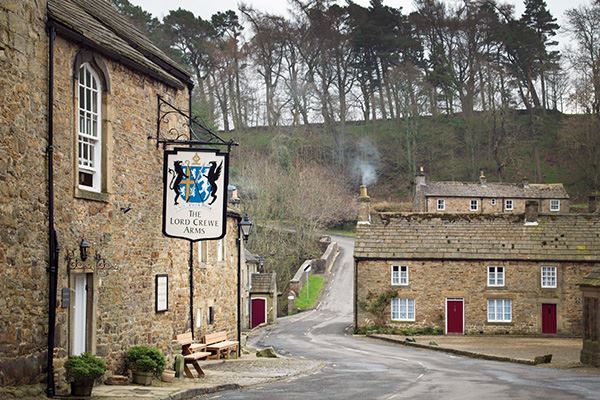 Lord Crewe Arms nestled in the village of Blanchland 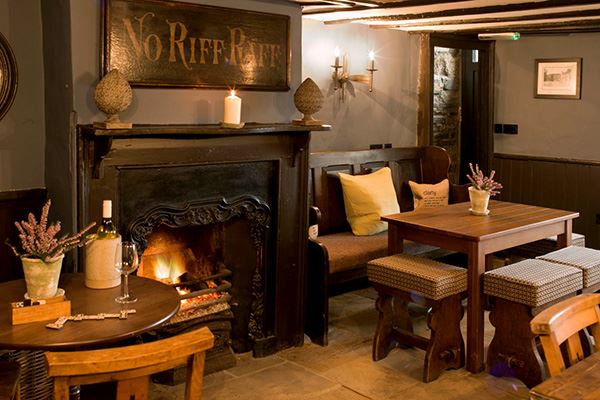 The Nevill Crest & Gun is an intriguingly named pub, in a building with over 500 years of history. The ‘Nevill Crest’ refers quite literally to the crest of the Nevill family, the Earls of Abergavenny, on whose estate the pub was built – it is their monogram that adorns the building and many others in the surrounding area.

The ‘Gun’ arose from a forge on the estate which produced cannons and cannon balls for the Nevills. Inside the pub you will find incredibly atmospheric, beamed rooms and roaring fires along with a lighter garden room which overlooks the lawns. It is family and dog friendly.

The Kings Head Tealby in Market Rasen, is the oldest thatched pub in Lincolnshire circa 1367. The pub offers everything from home-cooked food from a traditional bar menu to dishes from the a la carte menu, fine real ales on rotation and a relaxed enjoyable atmosphere. Relax with friends and family in the bar or lounge area, or dine in the warm cosy lounge or beautiful restaurant areas.

The Inn at Penallt, Monmouthshire

If you’re looking for an informal lunch or evening destination in Monmouthshire, you will be spoiled for choice. Just a few miles from Monmouth, in the Wye Valley, you’ll find The Inn at Penallt. This award-winning 17th-century country inn has cracking views, a roaring open fire, an extensive wine list and a menu that offers everything from snacks through to a la carte dining. 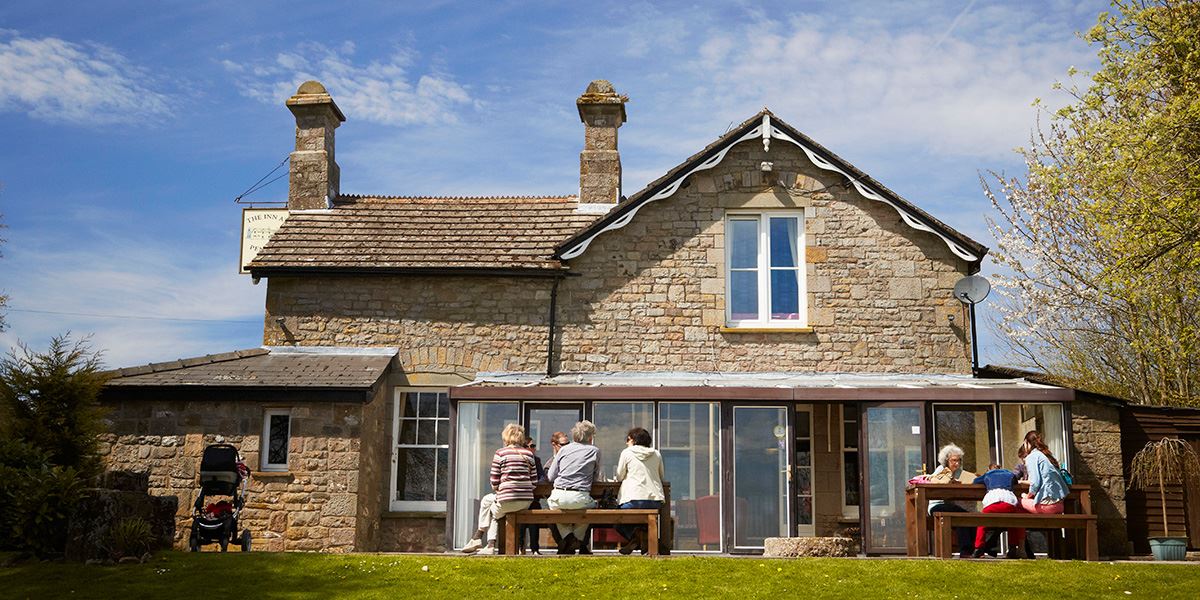 Whether you fancy fish and chips featuring the catch of the day, locally-brewed ale batter, thick cut chips, crushed peas and home-made tartar sauce, or the elaborately named ‘Glamorgan parsnipship crumble muffin’ sounds more up your street, you’ll find something for everyone here. The fantastic food and enviable location attract walkers, cyclists and bike enthusiasts alike. Expect the odd canine too – the inn’s bar and accommodation is dog friendly.

The Nut Tree Inn is a traditional village pub which serves modern British food in the restaurant but remains somewhere to stop and have a pint or relaxing drink at the end of a long day even serving its own Nut Tree ales. The bar menu at this handsome 15th-century hostelry also offers home-made fish and chips. The pub has been awarded a Michelin star for nine years in a row.

Tucked away on the edge of the sand dunes at Low Newton is a hidden gem on the picturesque Northumberland coast that is not to be missed. A tiny hamlet which consists mainly of cottages on three sides of a small village green, it also boasts a pub with a big reputation. The Ship Inn often finds itself full to the brim at weekends, when tiny Low Newton is packed with families enjoying the scenery, the sand, and some pretty good food and beer from The Ship’s own micro-brewery.

Along with interesting vegetarian food and delicious old fashioned puddings, the pub also serves very good fish, nearly all of which is caught by local fishermen. Perhaps because it is off the beaten track, the restaurant has restricted opening so do check times, but few sights are more memorable than that of Low Newton Beach as dusk falls, so do add an evening visit to your itinerary during your stay in Northumberland.

The Ambleside Inn, Cumbria and the Lake District

The award-winning Inn Collection Group have made their Lake District debut with the opening of the stunning Ambleside Inn. Materials and the inn’s earthy colour palette reflect the natural environment, while original features including a log burning stove and bar pillars have been retained. Local memorabilia, photo murals and prints add feature interest to walls. The nine-month redevelopment includes a total redesign of the 150-capacity dining and bar areas to create a laid-back venue with the design brief focused around being walkers, outdoors enthusiasts and dogs. 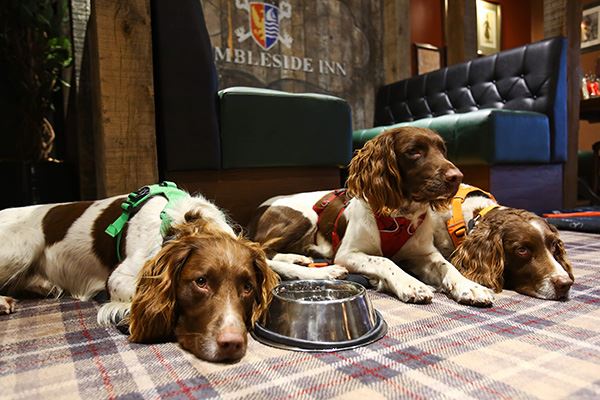 Max, Paddy and Harry at The Ambleside Inn 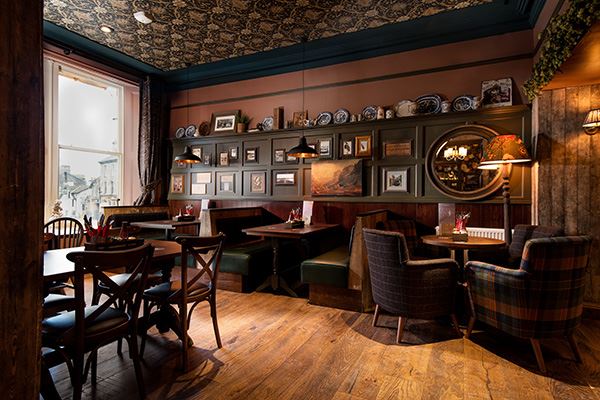 Cosy interiors at The Ambleside Inn

Situated in the High Street area, close to Hull’s Museums Quarter and William Wilberforce House, Hull’s oldest pub dates back to 1336 where it was originally a tenement. It was first licensed in 1729 having previously had many roles including a brothel and a coffee house. It is believed to be named after a Moroccan boy who worked in the building when it was a coffee shop in the 1730s. It has kept many of its original features including some ghostly apparitions, apparently! The pub serves a good selection of regularly changing real ales, ciders and fruit wines amongst other beverages.