The best independent and offbeat cinemas throughout the UK

Did you know just how diverse the UK’s cinematic landscape is? We've discovered the most offbeat and wonderful cinemas in Edinburgh, Newcastle, Kent, Shropshire and Devon to catch a movie across the land.

The Cameo is one of the oldest surviving cinemas in Scotland, and probably the oldest with its interior decoration intact. Now running as a three-screen operation, almost all of its original character and decoration are intact, making it a unique and very welcoming place to see a film. Opening as the King’s Cinema in January 1914, the cinema was named after the nearby King’s Theatre. The original seating was for 673 on a single level, sloping gently down towards a mirrored screen, which was the first of its kind in Scotland and a live orchestra provided music to the silent films. A refurbishment and name change saw The Cameo open in 1949. Now featuring three screens and a licensed bar with wide-ranging food menu, and decades on, is now in the safe hands of Picturehouse.

The Palace Cinema has a fascinating history. From 1911, it was known as York Gate Hall until Broadstairs Town Council used it as storage for beach equipment. In 1965, following the closure of other cinemas in the town, entrepreneur Jack Field converted the building into the 155-seat Windsor Cinema, with box office, projection box and screen. In 1974 it was Grade 2-listed. In 1986 and again in 2006, it changed hands, each time refurbished and kept up-to-date with the latest cinema technology. The film programme has always offered something for locals and visitors, including weekly film screenings selected by Thanet Film Society. In 2006, by then with 111 seats, it became the Palace Cinema and was fitted out with the highest quality digital projection, surround sound and large screen. The Palace Cinema changed hands most recently in March 2016 and the owners are now Corinna Downing and Simon Ward.

The independent Art Deco influenced Tyneside Cinema is the place to head for arthouse productions, classic movies, cult films and the latest new release big hitters. Built in 1937, it has been lovingly restored and fitted with comfortable armchair seats from which, armed with a glass of wine, you can enjoy all the latest blockbuster releases as well as a fine selection of foreign and classic films. 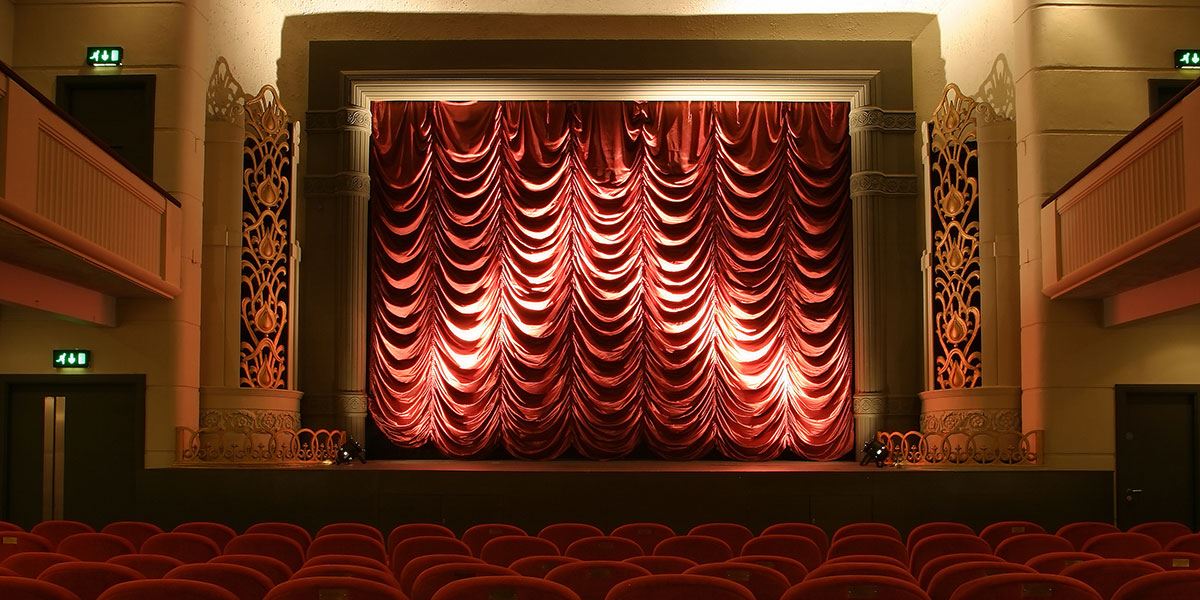 Built in 1937, the Tyneside Cinema has been lovingly restored

Established in 1914 and described at the time as “the cosiest in Leeds”, the Hyde Park Picture House is one of the UK’s oldest cinemas. Located just outside of Leeds City Centre, the Grade 2-listed building features an ornate balcony, gas lighting, and a warm, friendly atmosphere. It screens the very best independent, art house and classic films from around the world, as well as special live events with filmmakers, artists and academics. In 2019, with backing from the Heritage Lottery Fund and Leeds City Council, the cinema is embarking an exciting redevelopment project that will preserve, protect and celebrate the cinema’s unique heritage, whilst making the building more accessible, comfortable and sustainable for generations to come.

This glass-fronted cinema with a Paul Smith designed auditorium screens old and new, arthouse and mainstream, and all in a way that’s accessible to as many people as possible. It hosts autism friendly screenings, dementia friendly ones, ones you can bring your baby along to and cheap ones for under 25s. Broadway has two bars, and its own beer. It also holds film making schools for kids and teenagers during the holidays, fostering the next generation of British film makers, who one day might feature at the cinema’s annual sci-fi and horror film festival ‘Mayhem’.

The Rex Cinema is a movie palace with all the original Art Deco trimmings. Designed by David Evelyn Nye in 1936, the cinema opened to the public in 1938. After 50 years of service, the cinema closed in 1988 and became derelict. The building was listed Grade 2 by English Heritage and following a campaign to save the Rex by a local entrepreneur, the cinema re-opened to the public in 2004. Today, the cinema is a fully-operational independent cinema, screening films 362 days of the year. The programme ranges from vintage classic films to modern offerings which often attract large box office queues. 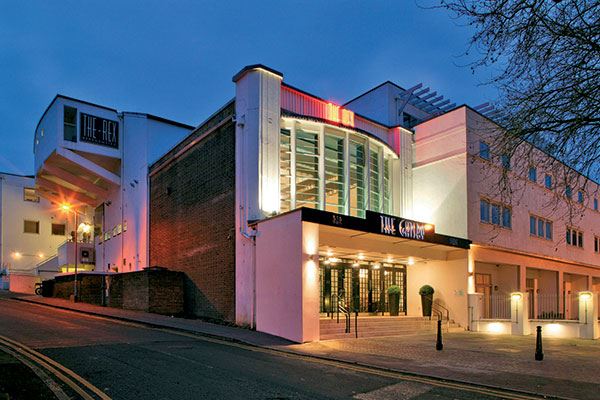 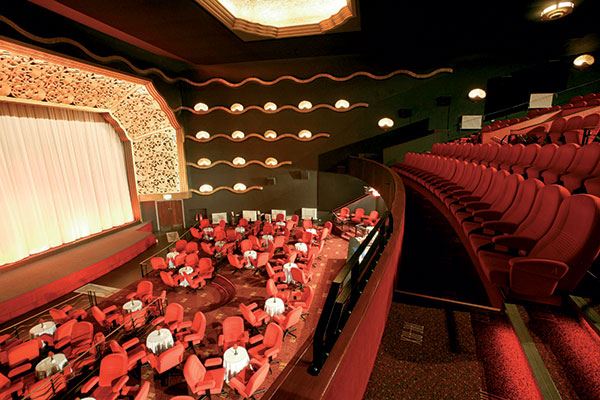 Watch a vintage classic at The Rex

The Star and Shadow Cinema, Newcastle

Equally quirky is the Star and Shadow Cinema, a community-led, volunteer-run cinema and arts space. An alternative artistic hub, it screens indie movies and hosts unique events and workshops. If you want to learn about the world through cinema, interesting people and everything associated with cinema as a space for change, this is where to go.

The Kinema in the Woods, Lincolnshire

The Kinema in the Woods in Woodhall Spa is a gorgeous family-run cinema and was opened in 1922 and the 68th cinema to be opened in Britain. It is the only cinema in Britain which still uses back projection. The cinema (or Kinema) continues to screen all the big releases as well as streaming theatrical events. The foyer is full of fascinating cinematic objects (an old commissionaire’s uniform, snack carts, a Dalek, a life-size Humphrey Bogart) as well as places to buy popcorn, coffee, beer and ice-cream. There is an interval in all films, so you can pop out for yet more ice-cream and there’s even an organ player! 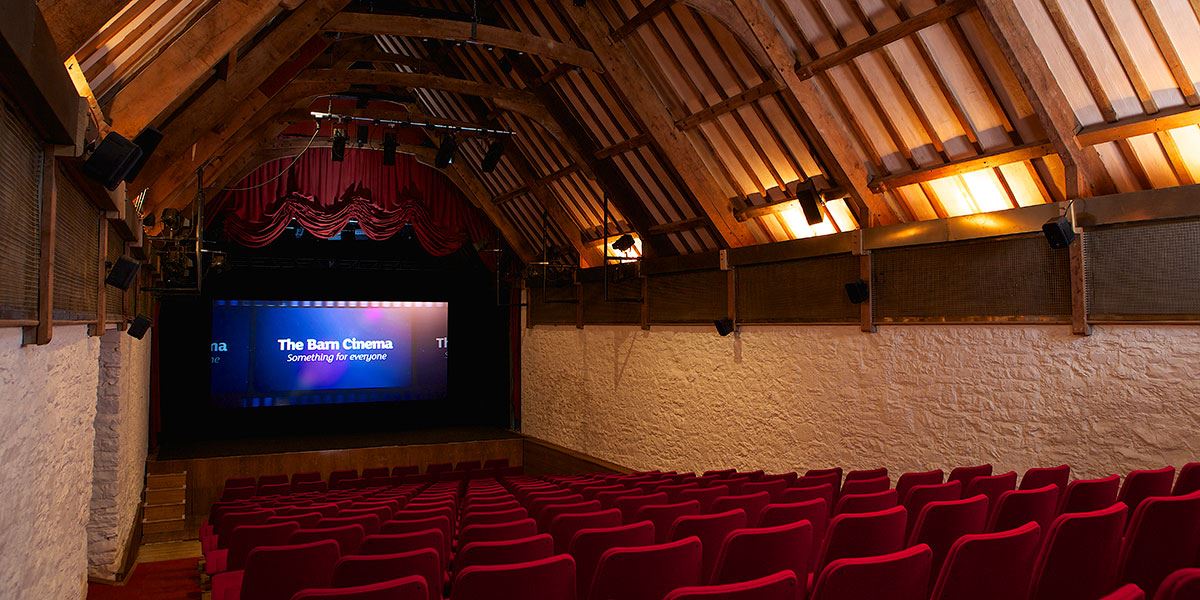 Catch a film in the unique surroundings of the Barn Cinema

Possibly the oldest cinema in the UK, the Electric Cinema was originally opened in 1909 and for over 100 years has been dedicated to showing the best of indie, mainstream and world cinema, as well as hosting events and screening old classics. There have been weddings held in its hallowed halls, and it features heavily in documentary The Last Projectionist, about the death of old school film projection in favour of digital. A champion of the best of cinema, it also houses Electric Flix production company who make dramas, documentaries and music promos. The art deco interior makes every film feel like an exciting cinematic experience.

In north west Shropshire, you’ll find the award-winning Kinokulture, a converted chapel which has plugged a gap in the county’s third largest town, Oswestry, with a mixture of blockbusters, documentaries and foreign language films – often accompanied by Q&A sessions with directors or members of the cast and crew.