Walk your way around London

While London is incredibly easy to navigate via its public transport system, often the nicest way to soak up all this fabulous city has to offer is on foot.

Whether you just want to take in the capital’s landmark sites, explore its open spaces, learn about the city’s famous faces (dead or alive) or uncover some of its little-known secrets, there are plenty of walking tours to take part in.

One of the best ways to get an overview of London is to walk the Jubilee Walkway, a self-guided walking route created in 1977 to mark the Queen’s 25th anniversary. The 14-mile route connects all the main places of interest in central London from Buckingham Palace to the Tower of London and you will be guided along the way by circular silver plaques set into the pavement at various stages of the walk and information panels describing the buildings in the area.

For those who don’t think they can manage the entire route, which is likely to take a full, long day, the walk is divided into five ‘loops’, which take between one and four hours. The Jubilee loop (one hour) and Western loop (five hours) take in some of the city’s most important sites including Buckingham Palace, St James’s Park, the Houses of Parliament, Big Ben, Westminster Abbey, Trafalgar Square, Millennium Bridge and St Paul’s Cathedral.

Dedicated to another member of the royal family, the Diana Princess of Wales Memorial Walk takes visitors through the four royal parks and within sight of famous buildings and locations associated with the Princess during her life and celebrates the Princess’s affection for the city’s open spaces. Set up in her memory in 2000, the seven-mile walk tours St James’s Park, Green Park, Hyde Park and Kensington Gardens and travels past the three palaces and two mansion houses which figure in Diana’s life; Kensington Palace, Buckingham Palace, Clarence House, St James’s Palace and Spencer House, the one-time London house of the Spencer family. 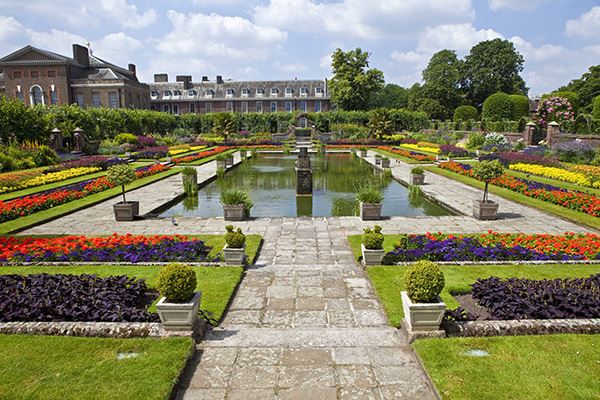 The gardens at Kensington Palace 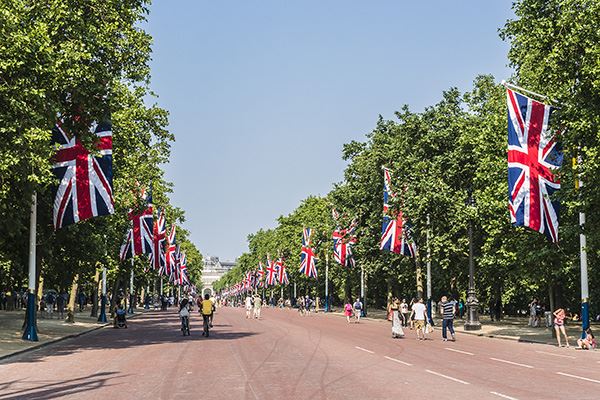 The Mall leads to Buckingham Palace

In contrast to the finely manicured gardens of London’s palaces, Hampstead Heath nature reserve offers a wilder walking experience although still with great views across the city. Discover the Heath’s 30 ponds and a vast variety of wildlife as you meander through just some of the almost 800 acres of woodland and meadows.

It’s impossible to ignore the Thames when in London and a river walk can be a great way to take in London’s most famous architecture. Extending from the Thames Barrier to the river’s source in the Cotswolds, the Thames Path would take some time to conquer in its entirety. However, broken down into bite-size sections, it’s much more manageable.

For example, the six miles from Albert Bridge to Tower Bridge takes in the Tower of London, the Houses of Parliament, St Paul’s Cathedral, the Tate Modern and Shakespeare’s Globe, while the five miles from Tower Bridge to Greenwich includes a variety of sights from Canary Wharf to the Cutty Sark and the Thames Barrier.

Set up in her memory in 2000, the seven-mile walk tours St James’s Park, Green Park, Hyde Park and Kensington Gardens and travels past the three palaces and two mansion houses which figure in Princess Diana’s life

Literary lovers might want to retrace the steps of Charles Dickens with a walk through Southwark, taking in the routes and views he would have known as a young man living in the city such as Guy’s Hospital, the White Hart Inn which appears in The Pickwick Papers, Horsemonger Lane Gaol, where he watched Maria Manning hang in 1849, and the St George’s Circus obelisk which features in David Copperfield.

Those into more modern fiction can sign up to a Harry Potter film location guided tour, which take in various film locations from the famous franchise including the entrance to the Ministry of Magic, the flight path of the Death Eaters in Harry Potter and the Half Blood Prince and the entrance to the Leaky Cauldron from Harry Potter and the Prisoner of Azkaban. There are various tours which start from different locations in London, check with your hotel for details.

Alternatively, you can see the various locations in London associated with James Bond on a Spies & Spycatchers walking tour, which includes stops like the wartime offices of MI6, where Kim Philby rose through the ranks, and Ian Fleming’s birthplace in Green Street, Mayfair. 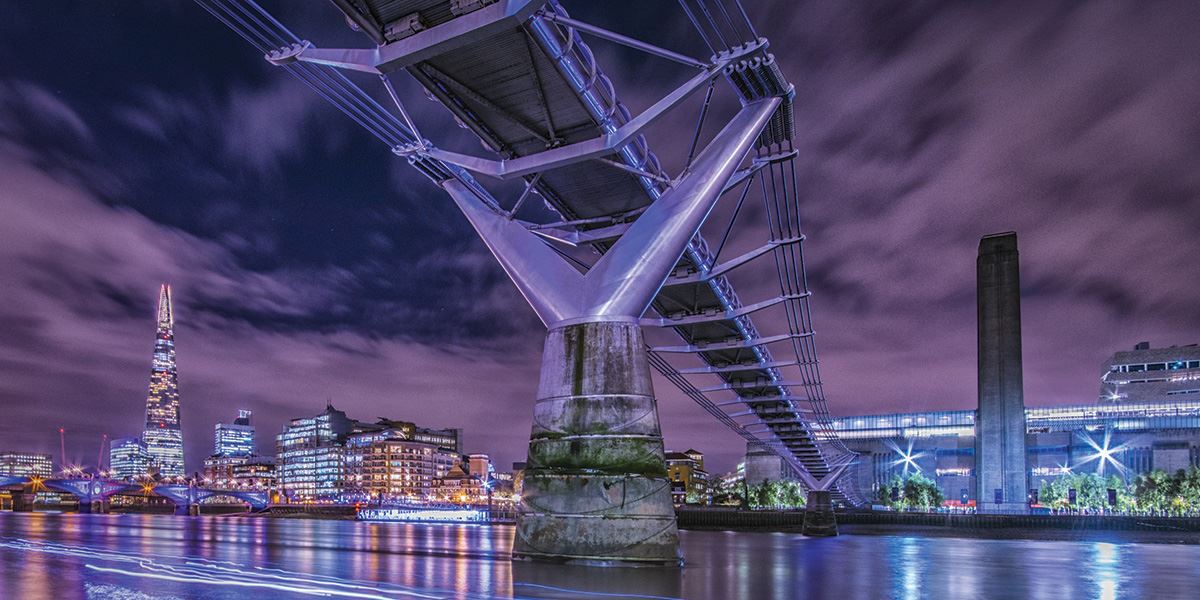 The Millennium Bridge is featured at the beginning of the movie Harry Potter and the Half Blood Prince, when a group of Death Eaters destroy the bridge

One of London’s most notorious characters is of course Jack the Ripper and the Jack the Ripper Walk is one of the most popular walks in the city. The walk, which takes place every night at 7.30pm (except on Christmas Eve and Christmas Day), setting off outside Tower Hill underground station, is led by Ripper expert Donald Rumbelow and will take you past sites including Jack the Ripper’s famed local, The Ten Bells on Commercial Street.

In fact, if you want to soak up some homicidal history between pints there’s a tour of East End boozers with bloody pasts. There’s the Spaniard’s Inn, one of London’s oldest pubs and a drinking spot of infamous highwayman Dick Turpin. His ghost (and that of his horse) are said to haunt the pub, and it has a bar named in his honour. The Spaniard’s Inn is also mentioned in Bram Stoker’s Dracula!

Or for those who fancy a ride to London’s dark side, hop on a Ghost Bus and uncover forgotten tales of intrigue and murder in the capital – just be sure to ring the bell when it’s time to leave or risk joining your creepy conductor for good! Ghost walks in general are in abundance in London, so if that’s your cup of tea, you’ll be spoilt for choice.